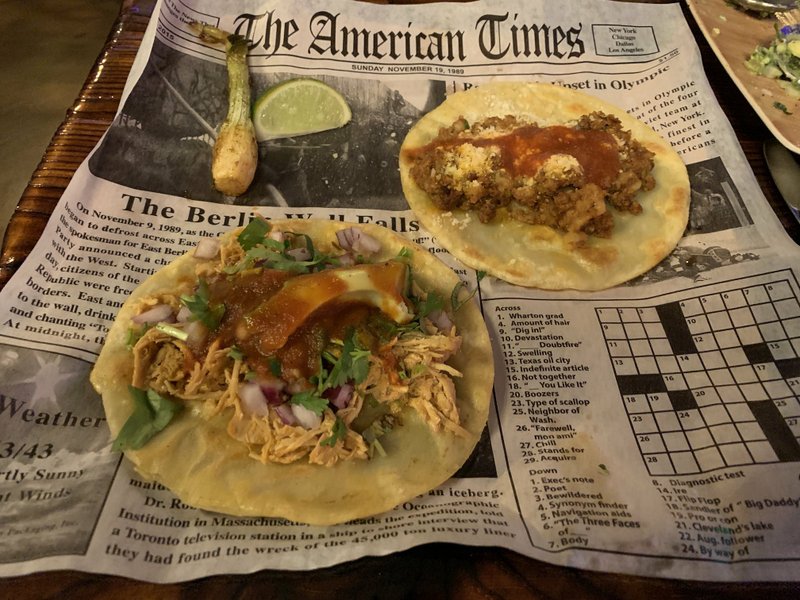 When Diablos Tacos & Mezcal opened in Hot Springs in February, we put it on our lengthening list of Spa City restaurants we haven't yet gotten a chance to try.

In what is perhaps a surprising turn of events, however, just a very few months later Diablos announced there would be a second location in Little Rock's River Market, in the space at the district's western edge where President Clinton Avenue meets LaHarpe Boulevard that started out as the now-defunct Rumba half of Rumba & Revolution and most recently housed the very short-lived Live Life Chill.

Alcoholic beverages: Full bar, with a list of 60 mezcals and nearly 60 tequilas

What is here named Diablos Tacos & Mezcaleria pairs an upscale Mexican menu, including "urban" tacos, plus a selection of Mediterranean-style olive oil, wine, bread and/or cheese-based tapas, with a dizzying list of 60 varieties of mezcal and at least that many tequilas.

Diablos' owners haven't changed the basic layout of the 5,500-square-foot space — the massive bar divides the main dining space from a semi-patio with garage-doors that open onto an actual patio — but they did make some changes to the interior decor, including a comfy sofa-based seating group just beyond the entrance. Booths still line the eastern wall and tables with chairs still occupy most of the dining space. The table-tops range from bright pastel colors to wood-grain and the chairs have padded seats and woven backs.

Stylized Dia de los Muertos imagery greets customers as they enter the establishment and appears, sometimes surprisingly subtly, just about everywhere else, including in the wall art and on the bar-menu cover. Large-screen TVs over the bar and at each end of the dining room show American and Latin American sports programming. The soundtrack splits between "traditional" mariachi-style music and Mexican pop. The staff was very helpful and service was universally excellent.

Our first impression from perusing the menu was that Diablos' prices were somewhat high, but after experiencing a couple of actual meals, we were favorably impressed by the food, which is fresh and enticing, and the prices seemed much more reasonable when considering the quality and quantity, but that the price, particularly of the entrees, was not substantially high even compared to other area Mexican restaurants.

One concern for the restaurant's long-term stability: Will it sell enough mezcal to sustain what must be an enormous inventory cost?

We initially thought calling them "Urban Tacos" on the menu was just an excuse to charge $3 to $4.50 for them (three for $8.75). But the two we ordered — Tinga de Pollo ($3, shredded chicken cooked with roasted red salsa, red onion, cilantro and avocado) and Papa con Chorizo ($3, a mild ground chorizo with onions, tomatoes, queso fresco and salsa verde) — were large and delicious, and obvious care had been taken for their presentation. That includes serving them on fake newsprint (with a crossword puzzle you can actually work). We're looking forward to trying some of the other options, including Pescado a la Diabla ($3, Capeado-grilled tilapia with red cascabel pepper salsa, red onion and cilantro) and Ribeye ($3.50, served with onion, cilantro and salsa roja).

There menu only lists a "4 x $20" price for tapas, but our waiter looked at us really askance when we ordered a quartet of the Tostada de Ceviche de Salmon, fresh Atlantic salmon "cooked" in Mediterranean citrus with red onion and basil and served on a crisp-fried flat mini-tortillas. Though theoretically finger food, ours quickly fell apart at first bite, and we needed to resort to a fork. But we couldn't have been more delighted at the fresh and balanced flavor, and even for lunch, it wasn't too much food. The menu also includes a presumably smaller Tostada de Ceviche de Salmon appetizer for $7.

Speaking of appetizers, a waiter prepares Diablos' Guacamole Fresco Picado ($9) at the table from a fresh split avocado, onions, green onions, tomatoes and, with our permission, jalapenos. The jalapenos gave it a nice back-of-the-palate kick that wasn't too hot for us to enjoy, and the result was enough to comfortably cover a party of three.

Down the line, we're eager to try the Queso Fundido ($10) and the Street Corn ($6), with mayonnaise, queso fresco and Tajin spice — a seasoning made with dried and ground red chilies, sea salt and dehydrated lime juice. (Tajin also lined the rim of our $9 jalapeno margarita, which we chose on the recommendation of the hostess, and which also had a nice little post-palate jalapeno kick but wasn't overly spicy.) There's a $2.50 menu charge for chips and a mild red salsa, but we weren't charged for ours.

And we only got about two-thirds through our excellent medium Sopa de Mariscos ($10) — shrimp, scallops, very tender chunks of octopus and a large piece of fish in a nice, mildly spicy broth — before having to pack up the remainder to take home. The $18 large version, we speculate, would be enough to feed a family of four.

If you're supplying drinks for small children or otherwise not into mezcal, tequila or any of the other bar offerings (including a much wider wine list than you'll usually find in Mexican restaurants), you have a choice of fountain Pepsi products (plus Dr Pepper) or a selection of bottled beverages, including Mexican Coca-Cola, Fanta and Jarritos flavors, Squirt, Topo Chico, water, coffee and iced tea.