NWA standouts decide on next step 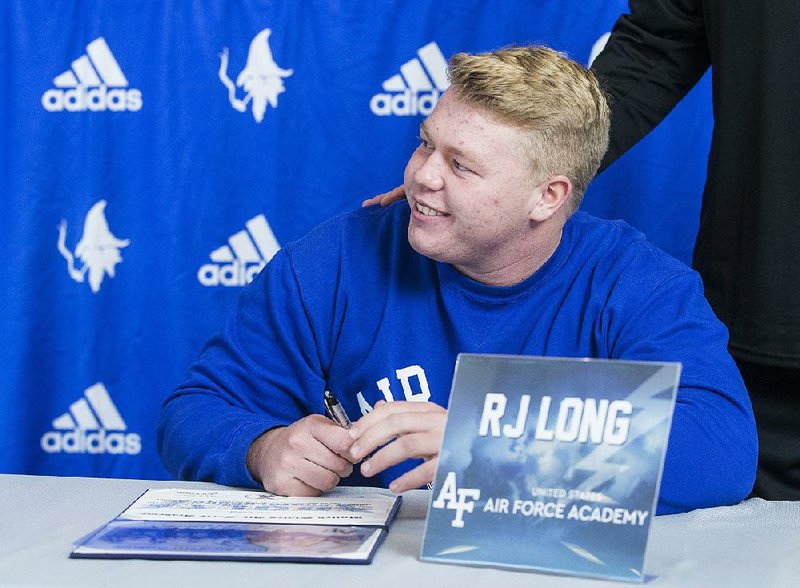 Bryant Burns, a senior tight end and linebacker at Ozark High school, signed with Army on Wednesday, the first day of the early signing period that runs through Friday.

R.J. Long, an offensive lineman from Rogers, put his commitment to Air Force in ink.

Burns, 6-3, 220 pounds, helped lead Ozark to the Class 4A state semifinals this season. He was a three-year starter for the Hillbillies.

He said he has long been interested in a military career.

"I've always thought about service," he said. "When they gave me the opportunity to serve and play college football, it was just something that was too good to pass up."

The West Point campus was a huge selling point.

"It's a beautiful place up there," he said. "If you've never been there ... it's truly an indescribable place."

Burns said he watched the annual Army vs. Navy game Saturday with much more interest knowing he has a chance to play in one of college football's most storied rivalries next season. Navy claimed a 31-7 victory.

"It's definitely a great school to go to," he said. "And after my military career, if I wanted to do that, then having a degree from there would help me get into med school."

Long, 6-2, 290, decided a long time ago that he wanted to play NCAA Division I football, and he also was considering a career in the military. He ended up marrying the two goals.

He said he didn't think he could do both until Rogers Coach Mike Loyd reached out to the Falcons' coaching staff on his behalf.

"It's been a pretty awesome thing," Long said. "I went out there on a visit and didn't really know anything about the academy, and once you go out there, I think you get a good feel about what they have to offer and what it takes. And I really loved it."

He started exploring the possibility a year ago and committed when he was on a visit to Colorado Springs, Colo., in June.

He is slated to play guard in college, but he played different positions for the Mounties as a three-year starter. Long played some guard and tackle, and even took snaps at defensive tackle the past couple of seasons.

Mosier, 6-2, 220, made his decision official Wednesday after committing to Central Florida in July.

"This day means a lot to me," Mosier said. "It's humbling, and I'm very thankful to my teammates, my family and friends, the people who've been with me along the way."

Mosier had 71 tackles as a senior, including a season-high nine tackles during a playoff victory over Cabot. He added three sacks and was credited with seven quarterback hurries for the Bulldogs, who finished 6-6 this season.

Mosier is joining one of the top Group of Five football programs of recent years. The Knights won 25 consecutive games before losing to LSU in last year's Fiesta Bowl to end the 2018 season.

He will graduate from Fayetteville this week, then leave for Central Florida, where he'll begin classes and participate in spring football with the Knights.