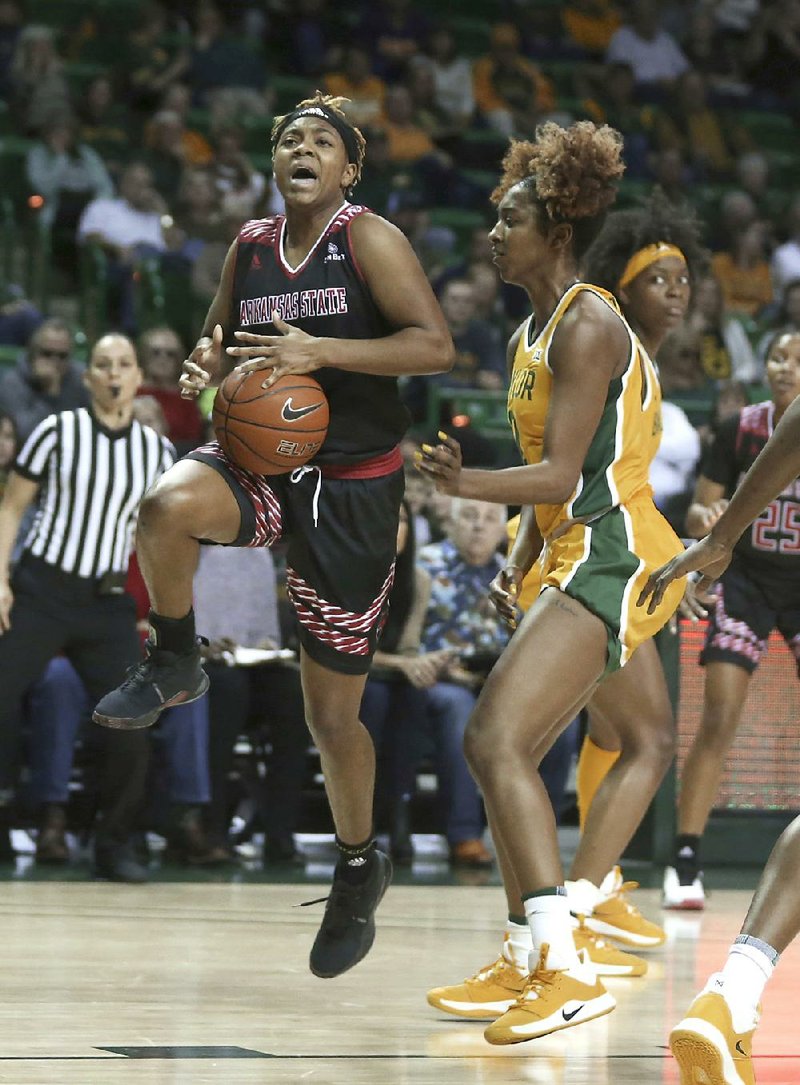 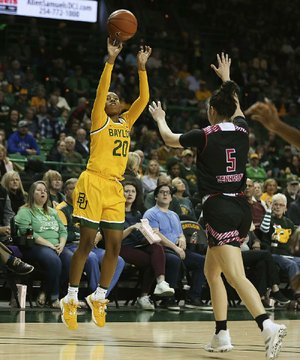 Baylor’s Juicy Landrum (left) shoots over Arkansas State’s Payton Tennison during the No. 7 Bears’ 111-43 victory over the Red Wolves on Wednesday in Waco, Texas. Landrum made an NCAA-record 14 three-pointers and finished with 42 points. (AP/Waco Tribune-Herald/Rod Aydelotte)

Juicy Landrum set an NCAA record by making 14 three-pointers for all of her career-high 42 points, leading No. 7 Baylor over Arkansas State University in Waco, Texas.

Landrum attempted all by one of her 24 shots from three-point range as the Lady Bears (9-1) shot 46% from the three-point line and 59% overall. The senior guard also had eight rebounds and seven assists.

Trinity Oliver had the other three-pointer in Baylor's 56th consecutive home nonconference victory since a loss to Connecticut in January 2014.

Trailing 12-8 after the first quarter Wednesday, the University of Central Arkansas (5-5, 1-0 Southland Conference) outscored Incarnate Word 17-4 in the second on its way to a victory in the conference opener for both schools at the McDermott Center in San Antonio.

Both teams shot poorly from the floor, but UCA (30.2%) managed a little bit better than Incarnate Word (25.7%). The Sugar Bears outrebounded the Lady Cardinals 42-25, including a 17-4 edge on the offensive glass, and held a 22-16 scoring edge in the lane.

The third time was the charm in overtime games for the University of Central Arkansas.

The Bears (2-9, 1-0 Southland Conference), who had lost their first two overtime games of the season, overcame an eight-point halftime deficit to beat Incarnate Word (3-8, 0-1) in the teams' conference opener at the Farris Center in Conway.

Sophomore Eddy Kayouloud led UCA with 26 points and 13 rebounds, while junior Hayden Koval added 12 points, 11 rebounds and 4 blocked shots. Junior Jared Chatham, who scored UCA's first eight points and final three in regulation, had a career-high 23 points and 8 rebounds for the Bears in his second start of the season.

The Bears never trailed in overtime, using a layup by junior Rylan Bergersen, an Aaron Weidenaar free throw and a three-pointer from Chatham to push the lead to 78-72 with 3:12 left. Incarnate Word got as close as 78-74, but UCA went 9 of 11 at the free-throw line in overtime to seal its first victory since Nov. 7 and the first for interim coach Anthony Boone.

Ivan Aurrecoechea scored a game-high 19 points and had a team-high nine rebounds to lead New Mexico State (7-6) over the University of Arkansas at Pine Bluff (1-9) at the Pan American Center in Las Cruces, N.M.

New Mexico State outrebounded UAPB 36-26 and held a 28-16 scoring advantage in the lane.

Jabari Rice had 17 points and Trevelin Queen added 12 for the Aggies. Marquell Carter, Markedric Bell and Dequan Morris had eight points each to lead the Golden Lions.