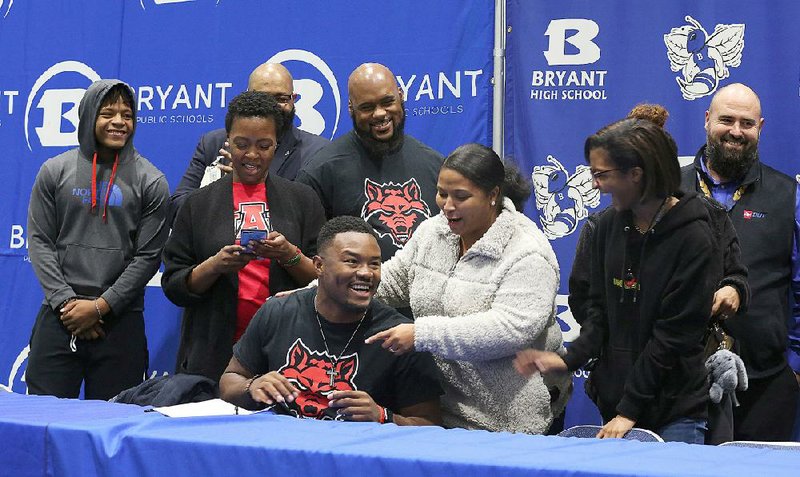 The Arkansas State University football team held its first practice of the week in Montgomery, Ala., on Wednesday in preparation for Saturday's Camellia Bowl, but the program still had plenty to take care of on the recruiting front.

The Red Wolves, who face Florida International at 4:30 p.m. Central on Saturday in Montgomery, Ala., signed 12 players from eight states Wednesday during the opening day of the early signing period.

As of Wednesday night, ASU had the sixth-ranked recruiting class in the Sun Belt and 96th overall nationally, according to 247Sports composite rankings.

"I've been pleased with this class. We haven't had any huge surprises," ASU Coach Blake Anderson said in a statement released by the school. "We held off a couple of Power 5 schools that took runs at guys in the last 24 hours, which is always huge for us. We're still closing out a couple, and then we're holding some spots purposefully for February.

"I felt like we may have rushed to fill all our spots a year ago and had some quality players become available in February that we couldn't recruit. So we've taken a little bit slower approach on this particular class to make sure we've got some room to look and see what is available in February."

"We've taken basically one or more players at almost every position, with the exception of tight end because we're not losing anyone there," Anderson said. "I feel like we've had quality players who have committed and signed at every spot. We had some key spots that we had to attack, and I felt like we did a good job there."

Anderson was not available for comment Wednesday, according to a team spokesman.

Among the notable additions were 6-1, 220-pound Ahmad Adams, who was one of the key cogs in Bryant High School's 2019 state championship run. He rushed for 990 yards and 15 touchdowns in 2019, but he is expected to play linebacker in Jonesboro. Adams is ranked the No. 17 player in the state, according to 247Sports.

The Red Wolves also signed quarterback and Saraland, Ala., native Brett Nezat, a three-star pro-style prospect who measures at 6-5, 224 pounds. Nezat will head into a 2020 quarterback room with Logan Bonner, Layne Hatcher and Coltin Clack.