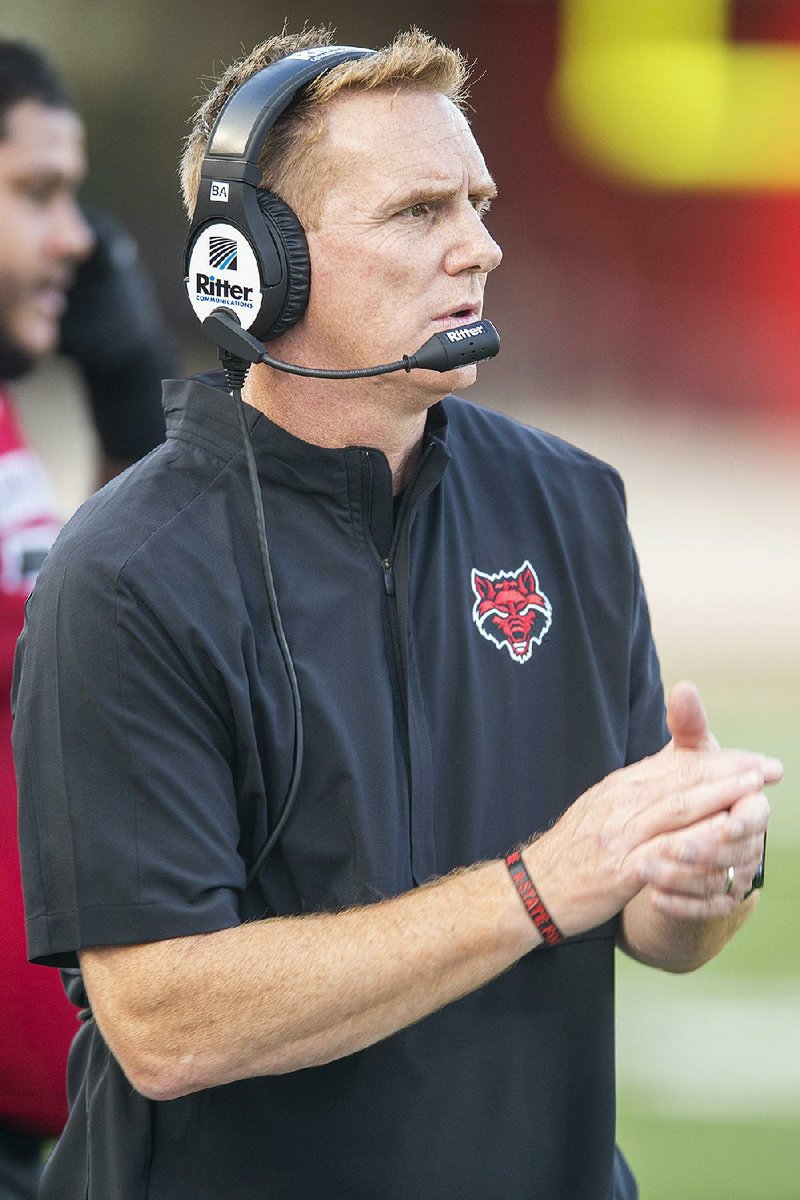 Arkansas State Coach Blake Anderson said he feels undeserving of the award he was given by the Football Writers Association of America on Wednesday. (Arkansas Democrat-Gazette/Jeff Gammons)

MONTGOMERY, Ala. -- Blake Anderson leaned forward in his chair with both hands clasped together, his eyes fixated toward the ground in front of him, his words slowly and carefully being spoken.

Inside a small conference room on the second floor of the Renaissance Montgomery Hotel and Spa on Thursday evening, Anderson humbly reflected on the honor he had received a day prior.

Members of the Football Writers Association of America named Anderson the recipient of this year's Capital One Orange Bowl Courage Award on Wednesday. The Arkansas State University coach has for the past two-and-a-half years, and especially the past four months, endured the most difficult period of his personal and professional life.

How could he feel that way, one might ask?

"I think there's a lot of people that battle much worse and that do on a daily basis than what I've dealt with," Anderson said. "It's hard for me to believe that they chose me. I'm honored and flattered and very grateful for it, and surely hope that I walk in a way that honors the award itself and the people that decide and make the decisions on it."

Thursday marked four months to the day since Anderson's wife, Wendy, died. It also marked the 27th anniversary of the couple's engagement. Anderson took to Twitter on Thursday morning to once again pay tribute to Wendy, who died Aug. 19 after battling breast cancer.

"27 years ago today she said 'yes'... 4 months ago today God took her home," Anderson wrote. "So blessed to have walked beside her if only for a little while. What an amazing heart for Christ & for those around her. Miss you Babe."

Anderson's resolve has been unwavering this season, and he's remained open about his personal loss off the field. He's constantly been forthcoming with interviews, even when he knows the subject matter may cut deep.

In July at Sun Belt media day, he said the situation with Wendy hadn't improved like they'd hoped.

On Aug. 1 at ASU's media day, he named defensive coordinator David Duggan the associate head coach in case he ever needed to step away from the team. That time came a few weeks later, and Anderson missed ASU's season opener before returning in Week 2. At Georgia a week later, emotions ran heavy when Anderson looked around at a pink-filled Sanford Stadium in Athens.

Anderson has since led ASU to a 7-5 finish and a ninth consecutive bowl berth. They'll face Florida International (6-6) on Saturday at 4:30 p.m. Central in the Camellia Bowl.

How was Anderson able to keep the Red Wolves in tact this year?

"Honestly I feel like they're the ones keeping me in tact," Anderson said. "I just feel like I'm putting one foot in front of the other every day, and when I feel the most filled up and the most normal is when I'm around the guys and the ball's being thrown and the whistle's being blown.

"I know my name's on the award but I, under no circumstances, do I deserve it by myself. I would say God's strength and Wendy's legacy and a bunch of great people deserve the award."

Anderson said he's unsure yet if he'll be able to make the trip to Miami Gardens, Fla., for the Orange Bowl on Dec. 30, where he's expected to formally receive the award on the field.

"I'm gonna try to make the trip," Anderson said. "If not, we'll definitely do our best to receive the award as graciously as we can."

Senior wide receiver Omar Bayless raked in plenty of accolades over the past week, a fitting conclusion to what's been one of the top individual seasons by a player in program history.

Bayless, who earlier this month was named the Sun Belt Conference Player of the Year after setting the school and league single-season records for receiving yards and receiving touchdowns, was named an All-American by three outlets in the last week.

"It's been really crazy," Bayless said. "It really catches me off guard because I don't really got my notifications on, so whenever I go on Twitter, that's when I kind of find out everything. But it's been a blessing. I can't thank God enough for Him just putting me in this position. I couldn't do it without Him."

After announcing last Friday that Forrest Merrill had progressed and had a chance to play in the Camellia Bowl, Anderson officially ruled the junior nose tackle out on Thursday.

Merrill, who's missed the last seven games with a torn bicep and was initially ruled out for the season, had been trying to practice last week, but he still wasn't 100 percent and ultimately Anderson didn't want to risk it.

"[He was] just not feeling confident and still having some discomfort, and it's just too risky," Anderson said. "We've got another season with him, and we sure don't want to put him in harm's way."

Anderson didn't offer any other major injury news but was hopeful the players who've played through nagging injuries late in the season will feel better for Saturday.

"Injury wise, same team that we played with the last couple weeks," Anderson said. "Guys that were playing beat up, hopefully we get a little bit better version of them at this point." 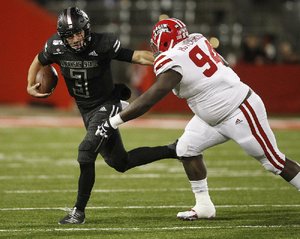