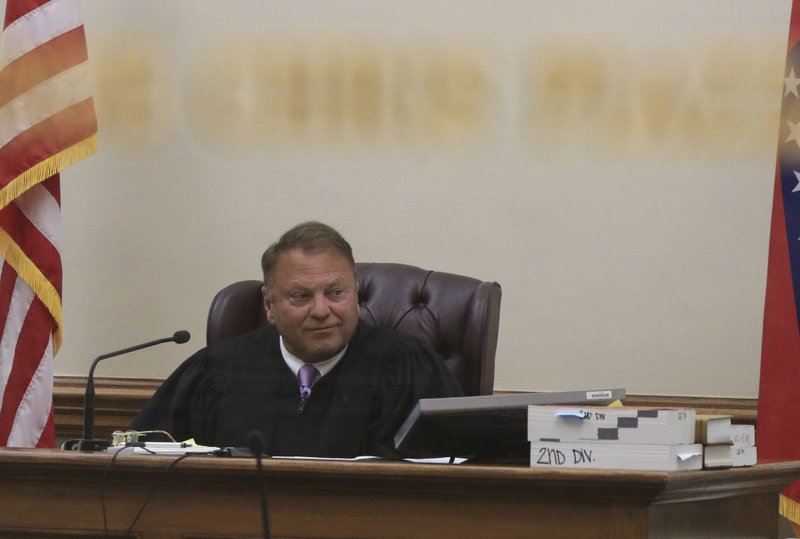 A portion of the state law that allows various agriculture groups to name representatives to the state Plant Board is unconstitutional, Pulaski County Circuit Judge Chris Piazza ruled Thursday.

Piazza's ruling came after a 90-minute hearing on a lawsuit first filed in October 2017 against the Plant Board by Monsanto Co., based in St. Louis. The company alleged that it had been harmed by Plant Board decisions that restricted, or prevented, farmers' use of Monsanto's dicamba formulation.

Piazza said he was inclined to stay his ruling while, or if, the case is appealed to the Arkansas Supreme Court because the Plant Board has other responsibilities beyond devising and enforcing pesticide and herbicide use regulations.

The attorney general's office, which represented the Plant Board in the case, said late Thursday afternoon that it was "in the process of determining our next steps."

Gov. Asa Hutchinson's office said, "We will continue monitoring the case and will review the order once it is issued."

Attorneys for Monsanto, now owned by Bayer, argued that the Arkansas law setting up the 102-year-old board was an unconstitutional delegation of powers because nine of the board's 16 voting members are selected by agriculture groups such as those representing seed dealers, seed growers, pesticide manufacturers, the horticulture industry, foresters and aerial applicators.

Seven other members are appointed by the governor to represent cotton, soybean and rice farmers and other interest groups. Two members represent the University of Arkansas' Agriculture Division but don't have voting privileges.

"There's a problem with this statute," Piazza said, adding he thought it could be resolved with a new law that gives the governor appointment power via a list of nominees supplied by the trade groups. "It eliminates the problem of the private organization making the appointment," Piazza said earlier in the hearing.

Earlier this month, Pulaski County Circuit Judge Tim Fox dismissed the same claims in a lawsuit filed against the Plant Board by six Arkansas farmers. His ruling, on Dec. 2, came without comment.

Like Fox, Piazza rejected Monsanto's claim that a board policy of giving priority to research by UA weed scientists was a violation of U.S. interstate commerce law.

Thursday's ruling was Piazza's second in the case since February 2018, when he dismissed Monsanto's lawsuit on the basis of an Arkansas Supreme Court ruling a few weeks earlier that the state cannot be made a defendant in its own courts.

Thursday, referring to the Supreme Court ruling on sovereign immunity and its continued effects on the Monsanto lawsuit, Piazza said, "This could be a case that never ends [and] a beast that's never killed."

In the February 2018 ruling, Piazza said from the bench that the Plant Board's makeup was "kind of unusual" but that its members had all taken an oath of office. He said he considered the oath-taking to be a "cornerstone" of honesty and fair-dealing. "They're in the position to look at all the information people were bringing to them," he said.

Monsanto appealed to the Supreme Court, which rejected part of the lawsuit last June because new regulations in place had rendered some of the company's initial claims moot.

Like Piazza, Fox cited the Supreme Court's sovereign immunity ruling and initially dismissed the lawsuit filed by the six farmers. However, Fox also said the higher court's ruling effectively curtailed the farmers' rights to due process and their right to appeal the Plant Board's ban of a herbicide linked to crop damage the past three growing seasons.

The Supreme Court also sent that case back to Fox, to reconsider the Plant Board's composition and the research requirement.

The Plant Board in May 2018 approved "Regulation 7" that states, in part, "The Board considers the environment in Arkansas to be unique, therefore there will be a higher consideration given to research that is specific to Arkansas. Research conducted by scientists from universities within the state will be the primary source of expertise to allow the Board to determine if the data is scientifically sound and relevant to growing and cropping conditions in the state of Arkansas."

Piazza didn't spend much time on that issue except for noting, early in the hearing, that Plant Board members consider Arkansas weather patterns and levels of humidity different from that in other states and prefer Arkansas-specific research.

In a statement after Piazza's ruling, a Bayer spokeswoman, Charla Lord, said, "We are pleased with the court's decision and remain committed to putting the best weed control tools in the hands of Arkansas growers who deserve -- and have been calling for -- access to the same tools as farmers in the states across the U.S. where XtendiMax continues to perform extremely well."

Lord said she didn't have any information on whether Bayer will appeal either Fox's or Piazza's rulings.

Weed scientists in Arkansas and other states say all formulations of dicamba, including new versions by Bayer and other companies, have a tendency in summer heat and humidity to move off target hours or days after application.

Some farmers who plant dicamba-tolerant soybeans and cotton say dicamba's use during the height of the growing season is their only defense against pigweed, an invasive plant that has mutated and has become resistant to glyphosate herbicides.