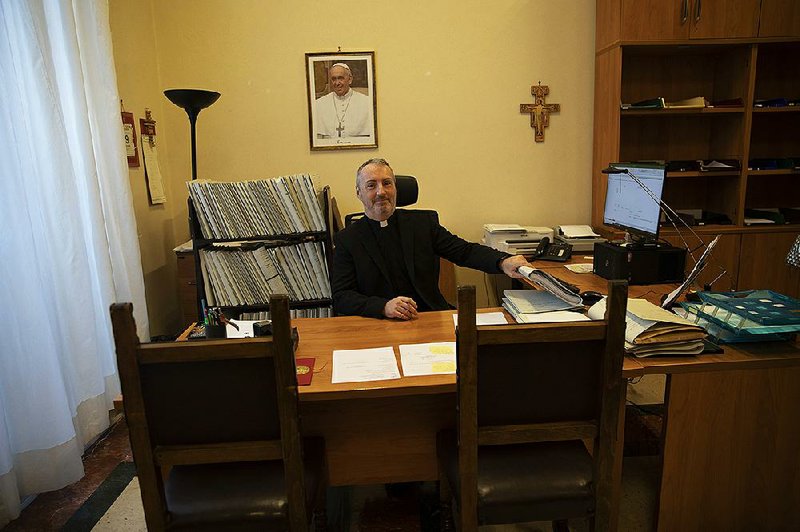 Monsignor John Kennedy, head of the Vatican office that processes abuse claims, said Friday that the office was “seeing a tsunami of cases at the moment, particularly from countries where we never heard from [before].” More photos are available at arkansasonline.com/1221vatican/

VATICAN CITY -- The Vatican office responsible for processing clergy sex abuse complaints saw a record 1,000 cases reported from around the world this year -- and still some regions that haven't reported any allegations at all.

The Congregation for the Doctrine of the Faith is overwhelmed, struggling with a skeleton staff that hasn't grown at pace to meet the four-fold increase in the number of cases arriving in 2019 compared with a decade ago.

"We're effectively seeing a tsunami of cases at the moment, particularly from countries where we never heard from [before]," said Monsignor John Kennedy, the head of the congregation's discipline section, which processes the cases.

He was referring to allegations of abuse that occurred for the most part years or decades ago. Argentina, Mexico, Chile, Italy and Poland have joined the U.S. among the countries with the most cases arriving at the congregation.

Kennedy spoke to The Associated Press and allowed an AP photographer and video journalists into the Congregation for the Doctrine of the Faith's inner chambers -- the first time in the tribunal's history that visual news media have been given access. Even the Vatican's most secretive institution now feels the need to show some transparency as the church hierarchy seeks to rebuild trust with rank-and-file Catholics who have grown disillusioned with decades of clergy abuse and cover-up.

Pope Francis took his own step toward greater transparency with his decision this week to abolish the so-called pontifical secret that governs abuse cases. In making the announcement, the Vatican said the change would facilitate cooperation with civil law enforcement.

[Video not showing up above? Click here to watch » https://www.youtube.com/watch?v=g0UQ0VrQ-Xc]

The Vatican's explanation amounted to an explicit admission that bishops had used the pontifical secret in the past as an excuse to refuse cooperation with criminal subpoenas and civil litigation.

But the congregation's struggles remain, and are emblematic of the overall dysfunction of the church's in-house legal system, which relies on bishops and religious superiors, some with no legal experience or qualified canon lawyers on staff.

As a result, the Vatican finds itself still struggling to reckon with a scourge that first came to light publicly in Ireland and Australia in the 1990s, the U.S. in 2002, parts of Europe beginning in 2010 and Latin America last year.

The Congregation for the Doctrine of the Faith serves as the central processing center for abuse cases as well as an appeals court for accused priests under the church's canon law, a parallel legal system that dispenses ecclesial justice.

In the past, when the congregation was known as the Holy Office or the Sacred Roman and Universal Inquisition, such church punishments involved burnings at the stake for heretics and publishing lists of banned books.

Today, justice tends more toward ordering errant priests to prayer, penance and prohibition from celebrating Mass in public. The worst punishment handed down by the church's canon law, even for serial child rapists, is essentially being fired, or dismissed from the clerical state.

The congregation under then-Cardinal Joseph Ratzinger (the future Pope Benedict XVI) persuaded St. John Paul II to centralize the process in 2001, given bishops were failing to punish predator priests and were instead moving them around from parish to parish, where they could abuse again.

The 2001 revision calls for bishops and religious superiors who receive an allegation to conduct a preliminary investigation, which in the U.S. is often done with the help of a lay review board.

If the bishop finds the claim has a semblance of truth, he sends the documentation to the congregation, which tells him how to proceed: via a full-blown canonical trial, a more expedited "administrative" procedure, or something else, including having the congregation itself take over the investigation.

Eventually the bishop or superior reaches a verdict and a sanction, up to and including dismissal from the clerical state, or laicization.

If the priest accepts the penalty, the case ends there. If he appeals, the case goes to the Congregation for the Doctrine of the Faith.

The Congregation for the Doctrine of the Faith has processed 6,000 abuse cases since 2001, and at one point Francis lamented that it had a backlog of 2,000.

Today, the congregation counts just 17 officials, with occasional help from other staff, plus top managers. Kennedy said he was planning to bring in Brazilian, Polish and bilingual American canonists to help offset expected departures of current staff and to process cases from countries that are only now beginning to reckon with abuse.

But there are still countries the congregation has never heard from -- a scenario that suggests "either that they're all saints or we don't know about them yet," Kennedy said.