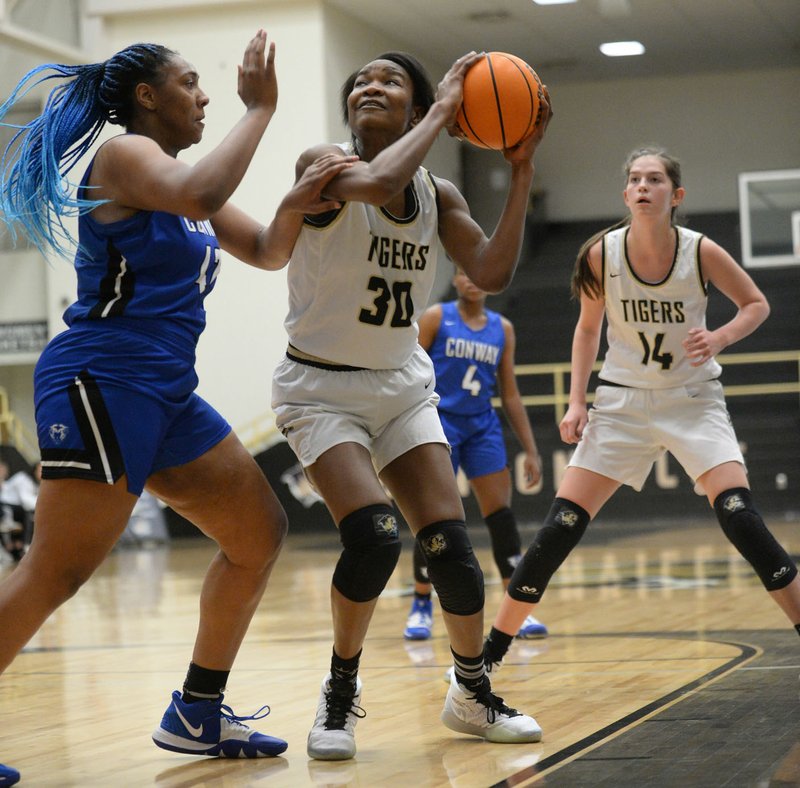 NWA Democrat-Gazette/ANDY SHUPE Bentonville's Maryam Dauda (30) takes a shot in the lane Friday, Dec. 20, 2019, as Conway's Savannah Scott (left) defends during the first half of play of the Malik Monk Classic in Tiger Arena in Bentonville. Visit http://bit.ly/2Mvuucv to see more photographs from the game.

BENTONVILLE -- Tom Halbmaier was ready to see how well his Bentonville High girls would bounce back one night after a blowout loss to Fort Smith Northside.

Maryam Dauda responded by setting a school single-game scoring record, and the Lady Tigers held off enough of Conway's runs to claim a 76-68 victory Friday night over the Lady Wampus Cats in Tiger Arena.

Dauda, Bentonville's 6-foot-4 junior post, finished with 36 points and broke the previous record of 34 set by Avery Hughes in a 2017 game against Greenwood.

"I was really pleased with our effort, from start to beginning," Halbmaier said. "I thought they were really connected defensively, created some mismatch issues and got a lot of deflections in the halfcourt. That led to some easy buckets for us.

"But Conway is a very good team. They made runs. We would get them down 10 or 12 points and boom, they go 8-0 real quick. Fortunately, we hit some free throws down the stretch."

Bentonville (6-1) entered the fourth quarter with a 56-42 lead, but Conway (7-2) pulled within 64-59 after a bucket by Savannah Scott, a 6-3 freshman post, with just under 4 minutes remaining. The Lady'Cats then followed two Katie Kultgen free throws and a Natalie Smith layup with eight unanswered points and made it a 68-66 game on Rebecca Boone's 3-pointer with 1:31 remaining.

The Lady Tigers, however, went a perfect 8-for-8 at the free-throw line over the last 1:21 to secure the victory.

"I'm so proud of how they battled," said Conway coach Ashley Hutchcraft. "When you have two freshmen, one sophomore and really one senior that has varsity experience, you can't be more pleased with the effort they brought throughout the game.

"They made some runs all throughout the game, and we always answered with a big shot or a defensive stop. I think, for us, we'll get better through the year because of our youth, so this is something we can build off of."

Dauda scored six quick points as Bentonville bolted to a 12-0 lead, and all five starters had scored at least once by the time the Lady Tigers had a 17-4 lead with 2:59 left in the first quarter. Conway then answered with a 13-2 run to close out the quarter and made it a 19-17 game.

The Lady'Cats, however, couldn't find a way to slow down Dauda, who scored 12 points in the second quarter and helped Bentonville extend its lead to a 39-27 halftime margin. Dauda then added 10 more points in the third quarter, and Heidi Baum's free throw with 6.5 seconds left gave the Lady Tigers their 56-42 lead, the biggest of the game.

"Maryam helped out a lot," Halbmaier said. "With her scoring 36 points, that took a lot of pressure off of us. Then Bella Irlenborn did a great job of anchoring that back-side defense and getting rebounds. She really, really worked hard.

"But it was a great team effort. All of the other girls did really well when they got in and played."

Fayetteville scored the game's 10 points and was never threatened as the Lady Bulldogs routed winless Little Rock Hall in the first game.

Sasha Goforth had a pair of 3-pointers and finished with 11 points for Fayetteville (6-2), which led 28-6 after one quarter and 52-12 at halftime. Carly Johnson also had 11 points and was the only other player in double figures for the Lady Purple'Dogs, who had 11 players contribute in the scoring.

Fayetteville returns to action at 2:30 p.m. today against Nettleton in Tiger Arena.