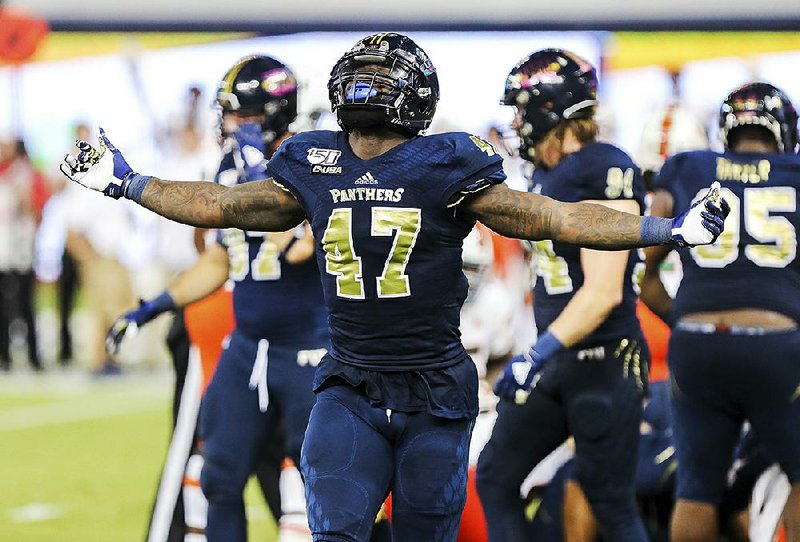 Florida International linebacker Chris Whittaker celebrates after a turnover during the Panthers’ victory over Miami on Nov. 23. The Panthers’ defense ranks among the nation’s best against the pass entering today’s Camellia Bowl against Arkansas State.

MONTGOMERY, Ala. -- There's been one glaring challenge for teams that have faced Arkansas State University this season: How do you slow down wide receivers Omar Bayless, Kirk Merritt and Jonathan Adams?

Containing one can be done, and two is possible. But all three together? Highly difficult.

WHERE Cramton Bowl, Montgomery, Ala.

Enter Florida International, which heads into today's 4:30 p.m. Central kickoff in the Camellia Bowl against the Red Wolves (7-5) with one of the top pass defenses in the country.

The Panthers' stingy secondary is known for its size, athleticism and physicality. FIU (6-6) has been unafraid to press and play man coverage, something most teams that have played ASU this year have strayed from doing.

"We've been wanting teams to do that all year," Bayless said. "It's a challenge for us. If you want that type of challenge, then you got to take it on. May the best man win. But we're ready for it."

Far too often this season, Bayless, Merritt and Adams have been the "best man" against coverages.

Bayless was the Sun Belt Conference's player of the year for a reason, tallying 84 receptions for 1,473 yards and 16 touchdowns, leading the nation in the latter two categories for much of the season. He broke the ASU and Sun Belt single-season records for receiving yards and receiving touchdowns, and he was named to three All-American teams, as well as a Biletnikoff Award semifinalist.

All of that has, to some degree, overshadowed what Merritt and Adams have done.

"It's gonna be a significant matchup, because they have got some unbelievably talented wide receivers," Florida International Coach Butch Davis said Friday.

Davis made sure to note the talents of his secondary, specifically senior cornerbacks Stantley Thomas-Oliver III and Isaiah Brown, calling them "long, fast and quick."

Thomas-Oliver stands 6-2, 184 pounds, and he was a wide receiver on the scout team two years ago before Davis suggested a move to corner. Brown measures 6-1, 185.

The result has been a pass defense that allows 178.5 yards per game, which led Conference USA and ranks sixth nationally.

"Who's gonna have the best day? That'll be a fun battle to watch."

Maybe it's a coincidence that FIU's cornerbacks coach, Bryn Renner, used to play under Anderson.

While Anderson served as Larry Fedora's offensive coordinator and quarterbacks coach at North Carolina from 2012-13, Renner was the Tar Heels' starting quarterback. Current FIU tight ends coach Drew Davis, who is also Butch Davis' son, was even a walk-on at UNC in 2012 before transferring.

Anderson couldn't help but exude a big smile when recalling those days, specifically his relationship with Renner.

"You had to have thick skin to be in that [quarterback] room," Anderson said. "Just smack-talking, laughing, cutting up, fun-to-be-around group of dudes. It was a great room.

"Bryn was a hard, hard worker. His dad's a ball coach, and he loved to play and loved to practice. But we picked on each other unmercifully, competed at everything unmercifully."

Now Anderson's star wide receivers will have their run at Renner's cornerbacks.

ASU offensive coordinator Keith Heckendorf -- who was first hired at UNC in 2011 to a player development role when Butch Davis was the Tar Heels' head coach, then later worked under Anderson and Fedora -- had plenty of his own Renner tales.

"Bryn, every day, you had to reel him in," Heckendorf said. "Every day was like the Super Bowl."

Heckendorf vividly remembers Renner breaking out a lawnmower celebration after he threw a touchdown pass to Giovani Bernard during a victory at Virginia in November 2012.

"As long as we keep him from not doing any lawnmower moves over on the sidelines, we'll call it a good day on Saturday," Heckendorf said.

The Red Wolves are making their ninth consecutive bowl appearance, which ranks 14th nationally and third among Group of 5 programs. During Anderson's tenure, ASU is 1-4 in bowls. One of those defeats came at the Camellia Bowl two years ago, when ASU lost 35-30 to Middle Tennessee State, one of Anderson's former coaching stops.

Plenty of ASU's older players have carried that negative memory throughout this week in Montgomery.

"I think it'll work in our favor just because we have been here before and nothing's really new to us," senior safety B.J. Edmonds said. "We had a great week of work and good practices, and we've just been really dialed in making sure that we get this 'W'."

Anderson spoke candidly leading up to the bowl about how he felt his players weren't emotionally in the right place due to different circumstances heading into the past two bowl trips, both of which resulted in losses.

That hasn't been the case this week. Anderson believes his team is where it needs to be.

"Guys win [bowl] games when they want to be there, they want to win, and they've got the right frame of mind going in," Anderson said. "I love where our guys' heads are at. I think they truly are excited to be here. We've had some of our best practices here going into game day, so you got to feel like we're gonna get their best effort and our best team right here when it matters most." 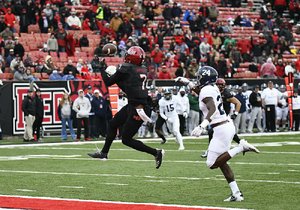 Photo by Terrance Armstard
Arkansas State’s Omar Bayless catches a touchdown pass against Georgia Southern on Nov. 23. Bayless has 84 catches for 1,473 yards and 16 touchdowns this season for the Red Wolves, who average more than 300 passing yards per game.