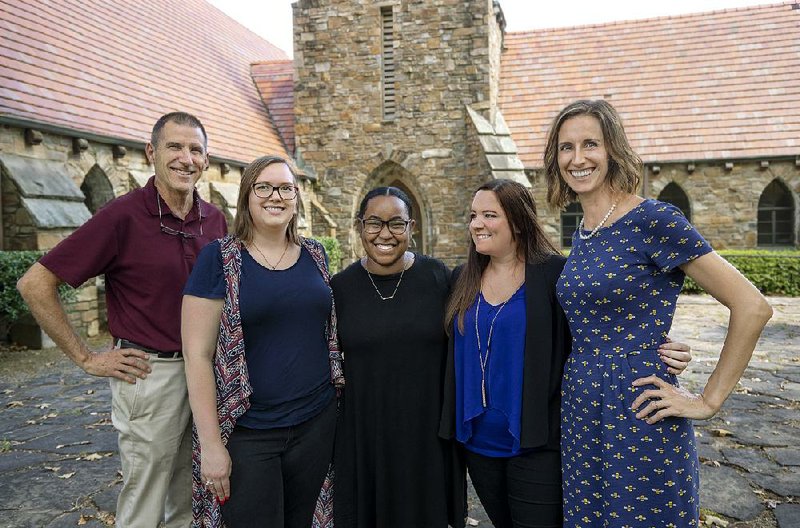 University of Arkansas at Little Rock professor Gerald Driskill (left), student researchers Jessica Olson, Jasmine Pugh and Kaylyn Hager; and fellow UA professor and study director Rebecca Glazier are on the team that conducted the latest survey of the Little Rock Congregations Study along with UA professor Kirk Leach (not pictured), of which the results were released Dec. 11.

A number of nonprofits in Little Rock band together with houses of worship to meet needs in the community, but both the desire and potential exist for more of those collaborations, according to the results of a survey conducted through the University of Arkansas at Little Rock.

The survey is the latest leg of research of the Little Rock Congregations Study, led by Rebecca Glazier, an associate professor at UALR's School of Public Affairs.

Glazier began the research project in 2012 with a focus on learning about the effect that faith-based engagement has on communities and using those results, in turn, to further benefit the community while giving students a chance to conduct hands-on research beyond classroom walls.

The results of the latest study, released Dec. 11, focus on learning about collaborations between nonprofits and congregations, the reasons behind those partnerships and the services they provide to the community.

The study's findings are the result of speaking with 118 area nonprofit leaders -- the number of respondents out of 329 nonprofits contacted -- and the results will shape a more focused look at congregation members' volunteering interests in a survey scheduled to be released next fall.

According to the Dec. 11 executive report, 70% of Little Rock-based nonprofits have partnered with religious congregations in the past and would do so again. No nonprofits reported a negative experience that would deter them from future partnerships. Another 20% of respondents have not partnered with congregations but would be interested in doing so. Seven percent of nonprofits said they did not desire a partnership, and 3% said their organization's policies did not allow collaborations with a religious congregation.

Of the nonprofits surveyed, 79% currently partner with other entities to help the community, and 75% are planning to have partnerships within the next year.

The nature of those partnerships can fall along a spectrum that includes competition to noninvolvement to integrated collaboration, according to Glazier. The majority of respondents said their ideal partnership would involve collaboration or actively coordinated efforts to help their community.

Jessica Olson, one of three student researchers who worked on this semester's study, said nonprofits responded positively overall when asked about their current collaborations, and whether they would do so again.

"Most of the organizations that we talked to, none of them had bad experiences [collaborating]," Olson said. "It's promising to form connections, and it's exciting to help form those relationships that people may not have realized were available, but ... were out there to help."

The nonprofits that were surveyed reported that the issue they addressed most often was education, with 30% dedicated to that cause. Most nonprofits that provide education services reported they are doing so on their own, Glazier said, and congregations have reported in the past that education is an important issue for their communities.

Those conditions, Glazier said, make education an area in which partnerships could be facilitated to the benefit of the organizations and the community.

"It's about bringing those organizations together and seeing how they can work together and benefit each other," Glazier said. "I think the desire to help the community is there, and the idea that we have from the surveys show that the desire to collaborate is there. ... A lot of it is just about connecting with the right people, because as we saw from the results, the views they have [about partnerships] are overwhelmingly positive."

A common focus on meeting food needs, said Glazier, is also an area of potential collaboration. Based on findings from the study's previous surveys, it has been able to provide the community with an interactive map of food pantries on its website, and Glazier and the team hope to be able to provide more resources as the study continues next year.

The hope for next year's study, Glazier said, is to have up to 50 congregations participating, yielding responses from thousands of members. Researchers will begin to look for churches and other houses of worship to participate starting in the spring, and the survey will be taken in the fall. In the meantime, the latest research will be shared at a future event hosted by the nonprofit City Connections next year.

There's also the hope that, with the help of a grant, events can be held in the future that will bring nonprofits and congregations together to talk about the issues they care about as a group.

"I think that's the key next step, as we know that a desire to collaborate is there," Glazier said. "We know that people have the heart to serve in our city, and we just need to facilitate those connections so that they can do it together."

More information about the findings of the Little Rock Congregation Study can be found at research.ualr.edu/lrcs and at facebook.com/LittleRockCongregationsStudy. 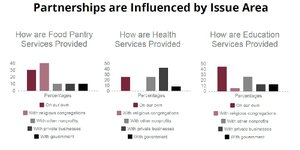