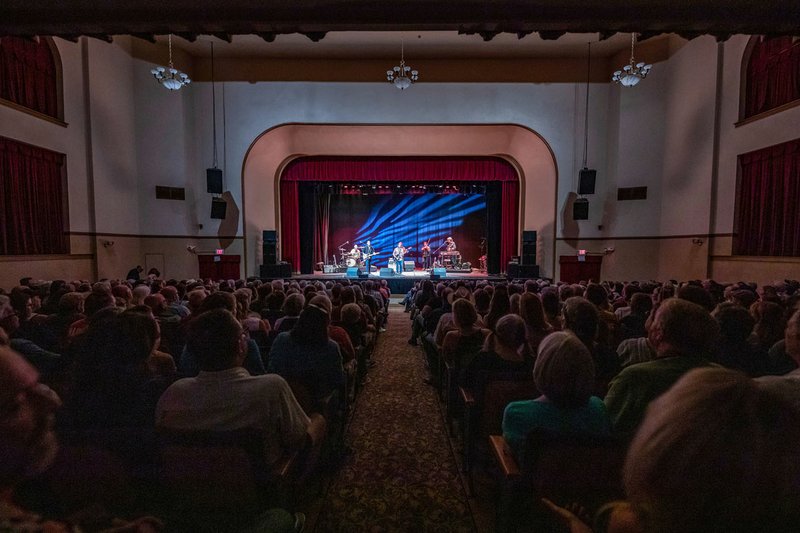 Set one foot in the fairy tale town of Eureka Springs, and you immediately know it's something special. Gracious Victorian style houses are cut into the side of a steep mountain and accessed by fantastically windy, narrow roads. The funky downtown area comprises brick and stone buildings, most dating back to the turn of the 20th century, when the town experienced its biggest boom as a fancy resort destination anchored by the reputation of the healing properties the springs.

The town's quirky past includes a rich artistic history that began when artists Louis and Elsie Freund arrived in town to start an art school for the Works Progress Administration (WPA) in 1939. Those artistic beginnings have blossomed into the vibrant creative community that exists today: This modest town of just under 2,100 people boasts an opera company (Opera in the Ozarks), a community theater (Five and Dime Drama Collective), a nationally recognized book festival (Books in Bloom), two film festivals (Eureka Springs Indie Film Fest and Human Rights Art and Film Fest), a folk festival (Ozark Mountain Music Festival) and a dozen art studios and galleries.

Three of the city's cultural institutions have had particularly good years: The Eureka Springs City Auditorium -- less formally known as the Aud, which hosted huge acts like Marty Stuart and Lyle Lovett this year; the Writers' Colony at Dairy Hollow; and the Eureka Springs School of the Arts, all of which are nationally recognized institutions that have been around for decades and continue to expand.

Eureka Springs' premier performance space had the misfortune of opening mere weeks before the great stock market crash of 1929; its birthday seems to have set a pattern of ups and downs that has been repeated throughout the theater's history. John Philip Sousa and his 67-piece band were the first performers in the space, and other boom times have featured visits by legends like Willie Nelson, BB King, Ray Charles and Arlo Guthrie. More recently, however, money problems have plagued the venue and, in recent years, it has primarily been used for performances by local groups. That's when renowned Tulsa promoter Larry Shaeffer came in to the picture.

"I like this town, and I have for decades," says Shaeffer, who owned Cain's Ballroom in Tulsa for more than 20 years and has a colorful history in the music business. He says he had been a frequent visitor to Eureka Springs before he got the idea to bring some big names back to The Aud. "I have a focus now, and I've made a commitment to Eureka Springs. Because of the caliber of shows I've done over there this year, this has become a very important project to me, not a sideline."

Shaeffer's company, Little Wing Productions, is known for bringing acts to Tulsa that might have previously passed through town. In fact, Shaeffer says he's proud to be known as the promoter who is "the only guy to book both Frank Sinatra and The Sex Pistols to play Tulsa." Since he started bringing acts to the Aud, he's booked the Nitty Gritty Dirt Band, Lyle Lovett , John Hiatt, Steve Earle and the Old Crow Medicine Show, and many of those shows sold out or came close to doing so.

"The key to making that venue work over there is to capture the [National Public Radio] listeners," he says. "Eighty percent of the ticket sales I've tracked are coming in from as far as 200 miles away, like Springfield, Fort Smith, Dallas, Tulsa -- a great little radius of people with expendable income, as well as retirees. The NPR crowd is 38 to 72 years old, which is a broad demographic. I try to do only Friday and Saturday shows, and my importance over there to the city is that I'm able to deliver a crowd for the weekend. Not only do they come to see my show, but they're prone to stay for a couple of nights. I'm not one for self-aggrandizing, but I really feel like I'm changing things there in terms of bringing in larger and larger shows."

The relatively small house -- just under 1,000 seats -- makes for a particularly intimate musical experience for audience and performer alike, and Shaeffer says many of the artists are as charmed by the environment

"The artists I've brought over there so far have enjoyed the town and the experience," he says. "They love the old theater. It's much more intimate. If you're on the back row, you've still got great seats that are close to the stage. There's a magic about it, and the artists are loving it. A lot of them haven't heard of Eureka Springs yet -- there's an excitement to it. It's almost like I'm showing them a little secret treasure."

Shaeffer says The Charlie Daniels Band is already scheduled to play the space in 2020, and he's got many more acts that he's excited about in the works.

"I don't have anything left to prove in this business," he says. "This is just fun for me."

The coming year will mark the 20-year anniversary for this venerated Eureka Springs institution. Eight guest suites in two downtown, side-by-side houses have been home to hundreds of writers who come for a quiet retreat, away from the distractions of the outside world, to focus on their work. Add in the picturesque surroundings of downtown Eureka Springs and two gourmet meals a day, and it's no wonder the program has not only survived but is also thriving. The Colony is beginning a full renovation of its suites to be completed in 2020.

"In 2019, we welcomed 57 writers to Eureka Springs for the first time, and 54 came back for their second, third or 15th visit," says executive director Michelle Hannon. "Some of them have been coming back every year, sometimes even twice a year. [The writers at the Colony have contributed] a significant legacy of literature -- we've got a bookshelf here full of work created by our writers and residents. I'm slowly working my way through it -- it's so much fun, reading these and knowing the writer or knowing I'm going to meet the writer. It's reading in a whole new way."

In addition to the suite updates, says Hannon, the organization is increasing its programming.

"We're adding more workshops, reading parties and community collaboration," she says. "We just started a brand new needs-based scholarship fund. Equity Bank was our first donation, and all of the funds we raised on Giving Tuesday are going right into that scholarship fund. We'll be able to extend opportunities to come here and write to those who may not be able to afford it."

Hannon says the community support from Eureka Springs has been a big reason why the Colony has succeeded for all of these years.

"I think it's a perfect fit here," she notes. "It's a very creative vibe, and [Eureka Springs community members] are very accepting of new ways of self-expression. I know our writers relish the interaction they have with the community. One of the things returning writers say is that they love walking through the town and meeting the locals, because they're so appreciative of their work. That's part of what keeps them coming back."

"We consider our early founders Louis and Elsie Freund, who opened up a summer arts school [in the 1940s]," says ESSA Executive Director Kelly McDonough. "They were also mentors and friends of our founders, Eleanor Lux, Douglas Stowe and Mary Springer." With a pedigree like that, it's not surprising that the school, now moving into its 21st year, has grown so much: It started out on one acre, with one building, and now boasts over 50 acres, multiple studios and is in the process of building housing for up to eight resident artists.

"We have one home on site, at the far back end of the 50 acres," McDonough explains. "It's been housing for one person at a time. We're a nonprofit, so it's not really feasible for us to be able to pay for hotel space for instructors to come to us. Between 30 and 50 of our instructors come from out of state, and it creates an incredible schedule conundrum for us. We're limited to how many people we'll be able to bring in. But, as our profile has risen, we've been able to attract people from all over the country to come and teach -- but we have to have a place for them to stay. [This housing is] going to change everything for us."

McDonough says the new residences will be for visiting instructors as well as artists-in-residence.

"We've had a few small residencies this year -- an artist from Hot Springs Village, Richard Stevens, a winner of a 2018 Governor's Arts Award. He's been teaching here for over a decade. We hosted him for a month and started modeling what the residency program might look like. He taught a workshop and was able to utilize the small studio in the back of the property, as well as our 2D studio. He did a public painting demonstration at the Eureka Springs Community Center to add that element of bringing the artist out to the community, which I think is a very important part of the residency program. He taught additional master's classes, offered to students who had taken a previous class with him at ESSA. That kind of gives you an idea; you can do a lot in a few weeks. It's a really nice thing for the artist and the community at large."

For McDonough, there's little mystery as to why ESSA has been such a success.

"I think the biggest thing is that [ESSA has benefited from] many decades of passion and dedication from focused individuals who thought this was a great opportunity to have something like this in this part of the country," she says. "But [they] also saw it as their duty and obligation. This is a revival of people understanding the importance of working with our hands.

"We're a very approachable institution -- very few classes aren't appropriate for the total beginner to come in and take a workshop and be successful," she adds. "We have world-class facilities, especially our wood and iron studios. There aren't a lot of other institutions like ours in the country. To be located in this community that has, for so long, been relentlessly focused on this work and the importance of carrying this kind of handicraft into the future -- it's a perfect storm of things that have made us successful."

Print Headline: A Renaissance In The Hills