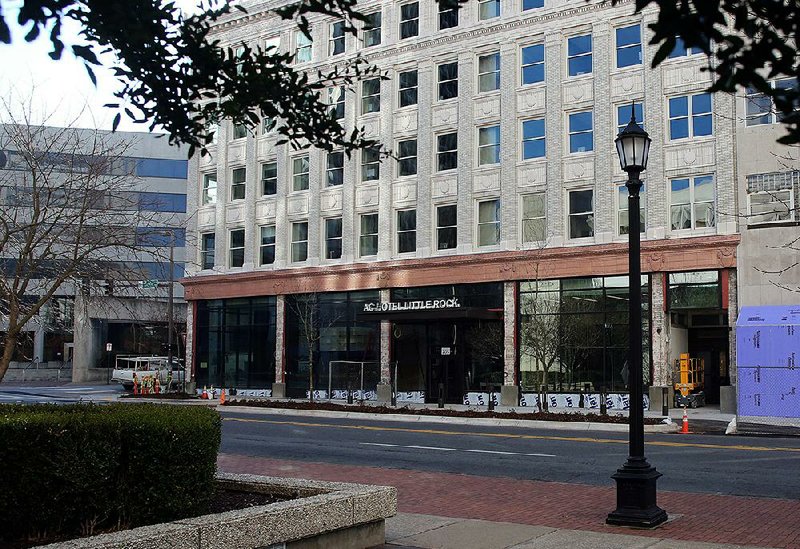 Workers are putting the finishing touches on downtown Little Rock's newest hotel that its backers hope will help spark a renaissance in the city core.

Last week, the 114-room AC Hotel Little Rock, at Capitol Avenue and Louisiana Street, was issued a temporary certificate of occupancy, a milestone that says an opening date is near.

The $18 million development spearheaded by Derek Alley should open in February, perhaps sooner.

Alley said he estimates the hotel is 95% complete. "We're at the point of punch lists," a list of items that need to be fixed or completed before a project is considered finished.

The company that will manage the day-to-day operations of the hotel, Schulte Hospitality Group, is advertising for three management positions, which include supervisors for the front office, housekeeping and food and beverage. Once the employees are hired, Marriott will fly in a team to train them, Alley said.

The AC brand, the marriage of the global Marriott hotel chain and Spanish hotelier, is merging its contemporary design and European roots into the classic architecture of the historic Hall-Davidson building. The five-story Hall structure was built in 1923 while the Davidson annex was put on in 1946.

The European vibe isn't Spartan, but it dispenses with such hotel staples as the bedside clock. No bath and shower combination, either. Just the shower. Few modern travelers use hotel clocks and baths.

"Everything has a purpose," Alley said of the AC design ethos that caters to younger travelers.

The continental flair will be apparent in the lobby, which will feature a tapas bar and lounge area that Alley said will be for Little Rock residents as much as for the hotel's guests. It will serve as a magnet for crowds and future development in the corridor.

"We're big believers in downtown, and the re-imagination and the resurgence of what's going on down here -- more people living down here, more retail, more hotel rooms," Alley said.

The breakfast buffet will feature a hint of Europe as well, he said.

The investors remain in negotiations with people wanting to lease 5,000 square feet of retail space that is part of the hotel.

"We expect probably after the first of the year, once the hotel's open, we'll be finalizing negotiations on our retail space," Alley said. "So by summertime, hopefully, we'll have retailers in there. And more amenities for downtown to enjoy."

The contractor for the project is VCC in which Alley serves as a senior executive. He has been involved in the construction of more than three dozen hotels. This will be the first he has helped develop.

Because the buildings are on the National Register of Historic Places as part of the Capitol Main Historic District, the investment group Alley heads, 201 W. Capitol LCC, was able to use historic tax credits as part of its financial plan supporting the project.

The tax credits are "a significant part of our capital stack and [the project] would not have been possible without it," he said during a recent tour of the hotel.

Like many investors in projects involving historic buildings, 201 W. Capitol LCC wanted immediate access to the cash it could realize from the credits.

"We sold the credits and then used that money we sold them for to fill the gap to get this project done," Alley said.

The buyer was Monarch Private Capital of Atlanta, which specializes in investing in projects qualifying for federal and state tax credits. Monarch boasts that since 2005, it has provided more than $1 billion in taxpayer investment in more than 500 projects in 25 states, resulting in $6 billion in economic development.

But historic structures still present challenges. As the developer, Alley said he wanted the project finished months ago. As the contractor, he ran into unforeseen obstacles that come with old buildings.

"Anytime you're working in an urban, historic environment you're going to have surprises," he said. "Early on we found some structural conditions that caused us to tweak our design to adhere to structural engineer's calculations."

The building's columns didn't line up from floor to floor, which played havoc with the room design.

"Then we had a lot of strategic redesign once we realized that was not the case," Alley said. "We had to fit in the rooms floor to floor."

The "biggest conflict" was the concrete joists from the "second floor to the third floor didn't line up," said Randy Murray, the construction superintendent for VCC.

"All the plumbing stacks, the [heating and air] stacks from two to three we couldn't get lined up because the structure was shifted," he said.

"When it comes to scheduling and delivering, they are considerations that take time," Alley added.

The next challenge, adding to the growing vibrancy of recent Main Street development, will come after the hotel opens.

Alley notes the hotel will be the closest one to the Little Rock Tech Park, which is on the next block at Capitol and Main.

"We've been talking to them," he said. "We look forward to a great partnership with them. And this whole Capitol [Avenue] corridor. This block 12 months ago was dramatically different. Hopefully this will be a catalyst project for the rest of the corridor."

Alley said that the Bank of America Tower across the street is for sale. Marketing documents suggest the 24-story office building, the third-tallest skyscraper in the state, "presents the opportunity to re-position the asset into residential, multifamily or hotel uses."

"I imagine somebody will do something exciting there," Alley said. "I don't want to speak for other people's business, but there is some exciting ... some of these tenant spaces down the block are getting traction.

"We believe the vitality of downtown Little Rock is crucial to the success of the entire city and entire metroplex."