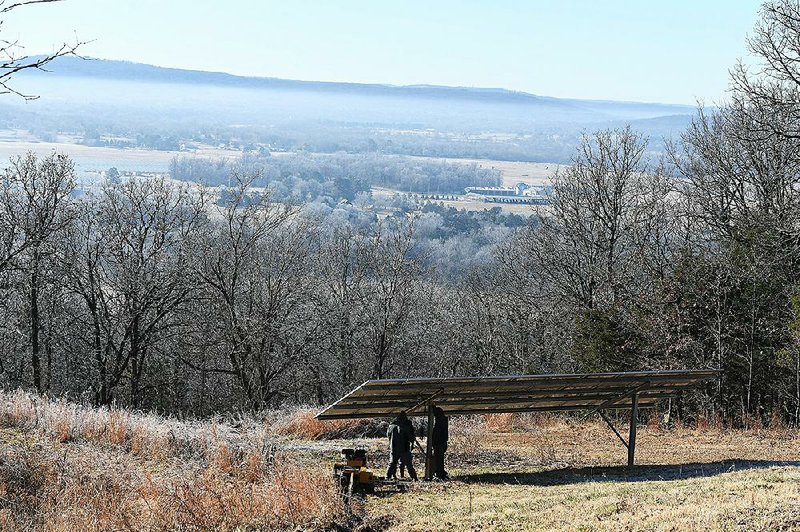 FAYETTEVILLE -- Solar panels that recently went up near Carol Reeves' home won't just help her save money on her electric bill, they'll also serve as the first residential test of a protective coating developed by a former student and are part of a project coordinated and installed by companies led by two of her other former students.

Reeves is the associate vice provost for entrepreneurship at the University of Arkansas, Fayetteville. WattGlass, founded by UA graduate Corey Thompson in 2014, was initially formed as part of an entrepreneurial class Reeves teaches. The companies that coordinated the installation of the panels, Seal Solar and Delta SunEnergy, are both of Little Rock and headed by entrepreneurs who learned the ropes in classes taught by Reeves.

"It is so exciting," Reeves said in a recent interview. "We've wanted solar panels for a while to do our part for climate change."

She said she mentioned adding solar panels to her home to former student Doug Hutchings, chairman of Delta SunEnergy, and he took the ball and ran with it. Hutchings said Delta SunEnergy focuses on commercial and agricultural solar projects so he teamed with Seal Solar for its residential solar panel experience and coordinated with Thompson from WattGlass so the project could serve as a testing ground for WattGlass' product.

"When the opportunity arose for a joint solar project at Dr. Reeves' house, it made sense to deploy WattGlass' modules there," Hutchings said in response to email questions.

WattGlass developed and brought to market a nanoparticle glass coating developed by Thompson during his doctorate research. Now WattGlass is testing the coating on solar panels installed last week at the Reeves home. The panels will be WattGlass' first full-scale residential test of its protective coating.

The glass coating is anti-reflective, anti-fog and self-cleaning. In applications for the solar industry, it reduces labor costs in cleaning and results in increased energy production, since panels stay cleaner and fog-free longer, according to Thompson.

He said WattGlass' coating system is water-based, making it a non-toxic and an easy addition to "drop in" to the manufacturing process. Other coatings are alcohol-based, which require respirators and protective clothing for employees and sealed rooms when they're applied to glass.

According to the company, the coating increases solar energy production by up to 3.5% when compared with uncoated glass and at least 0.3% over competing coatings. The coatings have a wide variety of applications including use in commercial lighting.

Thompson credited Reeves with motivating him to create WattGlass and with supporting the company with her know how.

The panels at Reeves' home will allow WattGlass to study the coating in a dedicated residential setting. Currently WattGlass has three research installations at Department of Energy regional test centers to field test its coatings against others currently on the market.

​The solar panels were installed by Delta SunEnergy, and Seal Solar oversaw the electrical and interconnection part of the project. Seal Solar was co-founded by Heather Nelson, who credits Reeves with a lot of her success. Over the summer, co-founders Josh Davenport and Nelson shifted their construction company's focus from general construction and spun off their heating and air operation to focus solely on solar projects both large and small. They rebranded the company Seal Solar.

Grant Beach, project coordinator with Seal Solar, said one of the advantages of WattGlass' coating is how well it resists dust and pollen, which naturally settle on solar panels. The coating, he said, makes them far easier to clean and therefore homeowners spend less time on upkeep.

"One of the most asked questions is how much maintenance the panels need," he said.

Nelson said she was excited to work with WattGlass on the project, adding she thought it was the first time three entrepreneurs who learned their business from Reeves got to work together on the project.

"She's the godfather of so many entrepreneurs in Arkansas," Nelson said of Reeves.

According to data released in March from the Solar Energy Industries Association, a solar-power advocacy group, 0.34% of Arkansas' electricity comes from solar power. The state's solar installations for 2018 jumped to just shy of 120, up by just a handful from the year earlier. The association pegs the value of 2018 investment in solar in Arkansas at $140.2 million.

The U.S. Energy Department says that since 2008, solar installations have grown from producing 1.2 gigawatts of power to about 30 gigawatts -- enough to power 5.7 million average American homes. According to the department's website, the average cost of solar panels has dropped more than 60% and the cost of a solar electric system has dropped by about 50% since 2010.

Hutchings said working on the project has been a unique opportunity for all of Reeves' former students.

"I've never run into a former Dr. Reeves student I didn't like," he said. "I'm a strong advocate for entrepreneurship and its ability to improve economic outcomes in Arkansas. It brings everything full circle to have three entrepreneurial companies, formed under Dr. Reeves' mentorship, working together on this project." 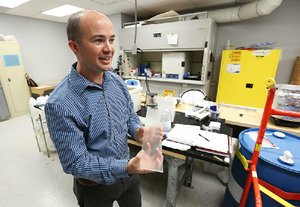 Photo by NWA Democrat-Gazette/DAVID GOTTSCHALK
Corey Thompson, chief executive officer of WattGlass, discusses the testing methods for styles of glass at the company lab at the University of Arkansas Research and Technology Park in Fayetteville.