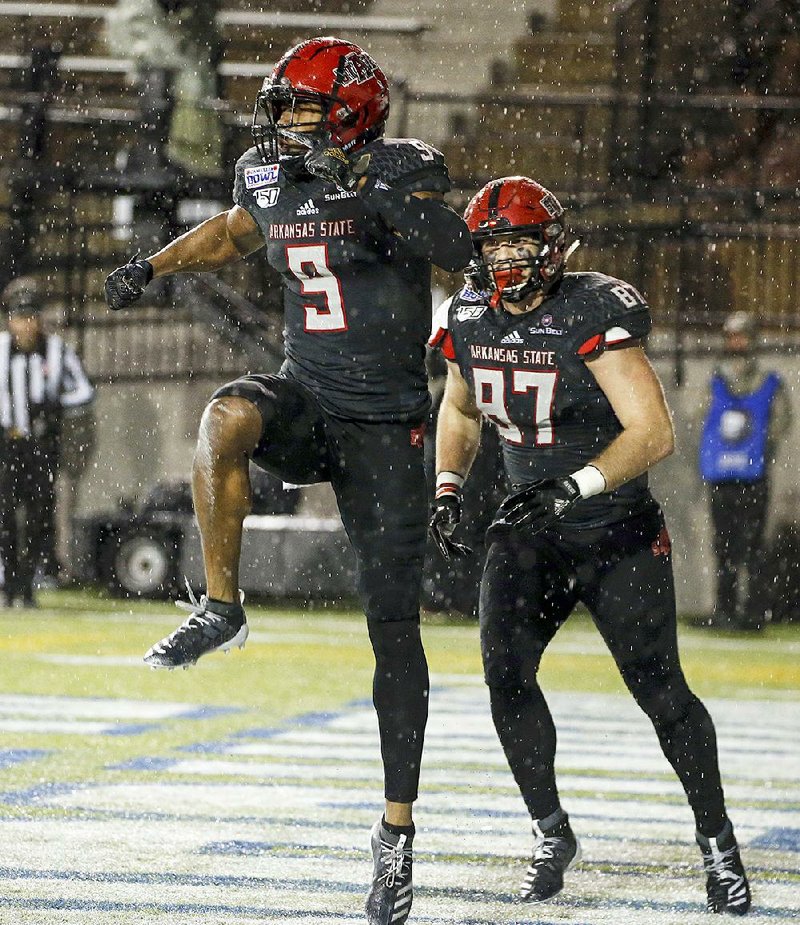 Arkansas State wide receiver Jonathan Adams (9) celebrates after his 13-yard touchdown reception from quarterback Layne Hatcher in the fourth quarter for the Red Wolves’ final score during Saturday night’s victory over Florida International in the Camellia Bowl at Montgomery, Ala.

After ASU took a 27-13 lead early in the third quarter, Florida International had pulled within one early in the fourth, thanks to 13 unanswered points. FIU kicker Jose Borregales lined up for a potential go-ahead 29-yard field goal attempt with just over five minutes remaining.

But Borregales -- who had hit all four of his previous attempts in the game, including a 52-yarder -- missed wide left, allowing Hatcher and the Red Wolves' offense to redeem themselves.

Hatcher found junior receiver Jonathan Adams for a 13-yard touchdown pass with 3:37 left -- the decisive play that lifted ASU to a 34-26 victory at the Cramton Bowl.

ASU, which entered 1-4 in bowls under Coach Blake Anderson, earned its first bowl victory since the 2016 Cure Bowl. The Red Wolves finished the season 8-5, their fourth season of at least eight victories under Anderson.

The emotions flowed through Anderson as the finals seconds ticked away. He was the recipient of a Gatorade bath. He accepted countless hugs from his team. Junior Logan Bonner, the starting quarterback ASU lost four games into the season, was one of the first to grab him. ASU defensive ends coach Brandon Joiner quickly joined in, wrapping his arms around both.

By the time he showed up for his postgame news conference, Anderson's voice was nearly gone.

"It's been an unbelievable ride, in every way, shape or form," he said. "It's a special group of guys, got me through a lot and got each other through a lot, too. It's gonna be a season that we'll never forget."

It was a season that began with an unfathomable low. Anderson's wife, Wendy, died Aug. 19 of breast cancer, less than two weeks before the opener against SMU. Anderson said he felt Wendy's presence with him Saturday.

"She may have blocked that kick, I don't know," Anderson said. "[Borregales] doesn't miss from there. We got a gift there."

Despite a persistent rain throughout, ASU racked up 525 yards, including 393 through the air. Hatcher completed 27 of 51 throws and had 4 touchdown passes. Senior wide receiver Omar Bayless capped his record-setting season with 9 catches for 180 yards and a touchdown, earning him the game's MVP award.

"You put in the hard work, and everything else will take care of itself," said Bayless, the Sun Belt player of the year. "The main thing I did throughout the year was just put God first, and I also learned how to overcome adversity."

An elite FIU pass defense, which entered ranked sixth nationally, was left reeling for most of the game. The Red Wolves attacked early and often. Multiple drops, including one by Bayless late in the second quarter that prevented a touchdown catch, was about the only thing slowing them down.

"Just felt like that we had to take what our best component of our offense has been all year and say 'thank you' for playing man coverage, and then go try to beat them," Anderson said. "We weren't trying to be careless. We just felt like we had good matchups and that we could win, and we did most of the day."

ASU put together two long scoring drives -- one of 15 plays and 80 yards, and the other of 13 plays and 90 yards -- to take a 14-0 lead by the end of the opening quarter. Hatcher hit Bayless for a 4-yard touchdown pass, and later found senior Kirk Merritt for a 9-yard touchdown pass.

FIU's offense -- which didn't cross midfield during its three first-quarter drives -- got going on the ensuing possession when running back Napoleon Maxwell punched in a 3-yard touchdown run to make it 14-7 ASU with 12:50 left before the half.

The teams traded field goals twice over the next four series to close out the quarter, and the Red Wolves took a 20-13 lead into halftime. Sophomore Blake Grupe hit field goals of 46 and 37 yards for ASU, and Borregales connected twice from 25 yards.

The Red Wolves' offense put together another surgical drive -- 11 plays, 74 yards -- to open the third quarter, with Hatcher finding wide-open sophomore tight end Reed Tyler on the left side of the end zone to give ASU a 27-13 lead with 12:22 left in the third quarter.

ASU began to unravel late in the quarter when Hatcher fumbled in his own territory, which gave way to Morgan hitting Maloney for a 19-yard touchdown pass to pull FIU within 27-20. Borregales tacked on a 48-yard field goal with 38 seconds left in the quarter to cut it to 27-23, then added another field goal -- this one from 52 yards, a Camellia Bowl record -- with 11:52 left in the fourth to pull within 27-26. The latter kick came after Hatcher committed his second turnover, an interception while targeting Merritt.

But Borregales' missed field goal with 5:10 remaining swung the game back into ASU's favor.

That's when the celebration ensued, and when all of the attention turned toward the Red Wolves' emotional head coach.

"I'll be honest with you -- I'm not really sure how [Coach Anderson] held his composure together like that [this season]," Smith said. "He rarely broke down, but we could tell he was hurting. Everything we did, we tried to keep him in mind." 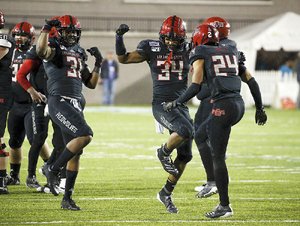 Photo by Special to the Democrat-Gazette/Butch Dill
Arkansas State defensive back Darreon Jackson (34) celebrates with teammate Jeremy Smith after his fourth-quarter interception sealed the Red Wolves’ victory over Florida International on Saturday in the Camellia Bowl.