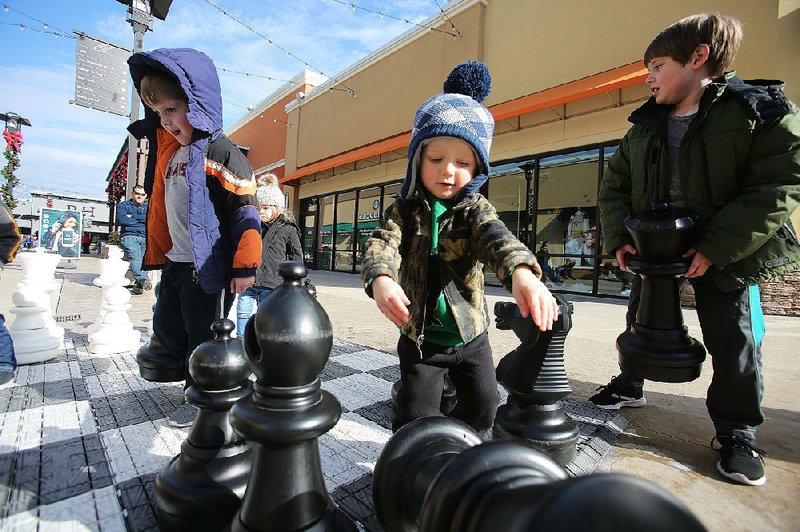 Maverick Stevens, 2, (center) makes his move while playing with big chess pieces Saturday with Benjamin Bortowski, 5, (left) and his brother, Jonathan Bortowski, 7, during a shopping excursion at the Outlets of Little Rock.  ( Arkansas Democrat-Gazette / Thomas Metthe)

With only four days until Christmas, stores and shopping centers in Little Rock were crowded Saturday with last-minute shoppers and gift-seekers.

"It does seem busier," said Erica Schoelkopf, a manager at Anthropologie at The Promenade at Chenal shopping center. "Some new stores have moved in, and the shipping cutoff has passed."

At the Promenade, where stores and shops line a long central corridor, the crowds didn't seem as tightly packed. At the Outlets of Little Rock, however, people laden with shopping bags, purses and children squeezed through doorways and around kiosks as they searched for the last items on their lists.

Michael Bortowski initially planned to take his sons, Jonathan, 7, and Benjamin, 5, to the outlets to pick out their mother's gifts. At the last minute, he changed his plans.

"I was just taking the kids out to get gifts for her," he said, gesturing to his wife, Angela, who was watching the boys ride on a small carousel. "But we decided it would be more fun this way."

Patrick Phelan and his three sons, ages 9, 11 and 14, had a similar idea. They went to the Promenade on Saturday morning to pick out gifts for mom. Each boy already had a gift idea in mind, and Phelan was escorting them from shop to shop to find it.

Naturally, what they were seeking as gifts cannot be printed in today's newspaper because that would ruin the Christmas surprise.

Many people, like Mary Smith and the gaggle she took to the Promenade, had already wrapped up their Christmas shopping by Saturday. Smith and her brother, Ryan Pittman, her daughter Mia Harrison and her daughter's friend Emily Owen, instead went to the shopping center to get pedicures, see a movie and get a bite to eat.

Smith and the girls had driven two hours from Paris, in Logan County, to spend the day with Pittman, who lives in Mayflower.

"We're not looking," Pittman said of gift buying. "But you never know, you might find something anyway."

Brittanee and Dillon Stevens were almost finished with their shopping Saturday afternoon, but had paused near a large chess set to let their 2-year-old son, Maverick, play with some other toddlers there.

Some of the children moved around and pushed the bishops, pawns and knights, while an older boy plowed through the opposing forces with a rogue rook.

Maverick jumped on a pawn, and the boy and the chess piece tumbled to the floor.

"Some kids would just play nice with them," Brittanee Stevens said, laughing. "Maverick has to tackle them."

The more cautious player, Emma Sarno, also 2, held one of the plastic pawns up to her chest and watched the chaos around her. Jordan Sarno, Emma's mother, watched from the sidelines and smiled.

"Oh, we did it all early this year," Jordan Sarno said of Christmas shopping. For Saturday, she said, "we just came out to see the Christmas tree and everything. We're just enjoying it." 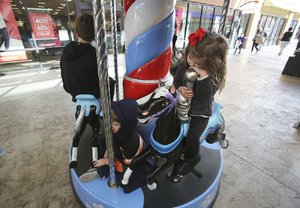 Photo by Thomas Metthe
Skylar Williams, 4, of Ward rests her head on a carousel horse as she takes a break from shopping with her family on Saturday, Dec. 21, 2019, at the Outlets of Little Rock.