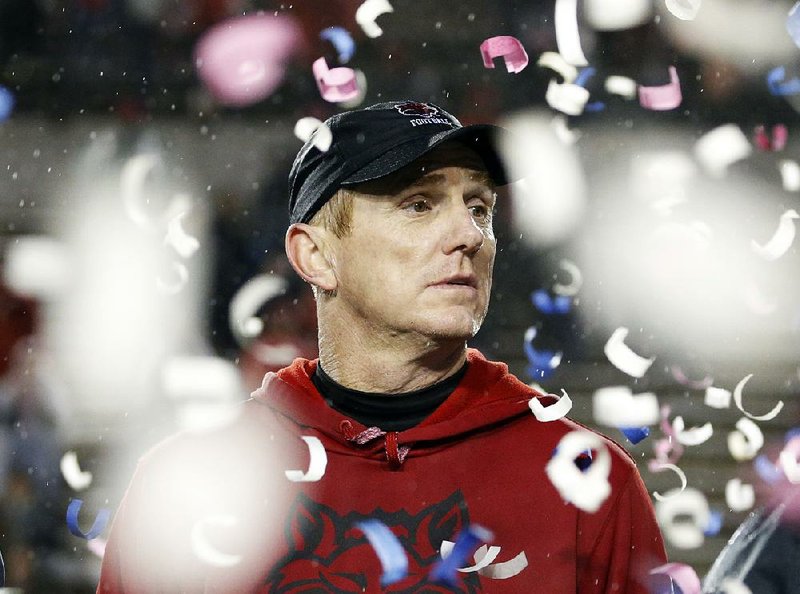 Saturday’s Camellia Bowl victory over Florida International in Montgomery, Ala., was the culmination of an emotional season for Arkansas State and Coach Blake Anderson.

All of the emotions the Arkansas State University coach carried with him during this taxing season had come rushing back.

As he addressed the media for the final time during the 2019 season after the Red Wolves captured a 34-26 Camellia Bowl victory over Florida International, Anderson was conflicted.

The one person he wanted to share the victory with the most -- his late wife of 27 years, Wendy -- wasn't there.

"All I could think about [was] I wish Wendy was here to be a part of it," Anderson said, doing everything he could to not choke up. "I've been trying to hold onto it for months and get to the finish line. It was really a tough few days -- a really long day [Saturday] just knowing that she wouldn't be here to be a part of it. Proud of the guys for how they got us across the finish line."

Four months ago, this finish line seemed like an eternity away.

With Wendy's health deteriorating, the school announced Anderson was taking a leave of absence from the team in the early evening of Aug. 19. Wendy died hours later. She had been diagnosed with breast cancer in the spring of 2017.

Anderson returned Sept. 7. He made a last-minute trip to Las Vegas the day ASU faced UNLV in Week 2, surprising players and staff members a few hours before kickoff at the team hotel. The Red Wolves won 43-17 that night.

"Just seeing him show up at the UNLV game ... that meant a lot to the players," Smith said. "And at that moment, everybody really just pulled together, and we felt like we had to do this for him, for everybody else around the team."

Smith said Anderson kept his composure throughout the season. Between his return at UNLV and Saturday night, about the only time Anderson publicly showed emotion was at Georgia in Week 3, the day Bulldog fans pinked-out Sanford Stadium in honor of Wendy. After the game, Anderson fought back tears.

Many players were close with Wendy off the field. Most referred to her as "Mama Wendy." Junior quarterback Logan Bonner and senior quarterback Carson Coats said earlier this season that the quarterbacks used to spend time chatting with her at the Andersons' home.

So, too, did senior wide receiver Omar Bayless, who frequently made trips to visit Wendy. Bayless maintains a tight relationship with Anderson off the field. He constantly kept in contact with his head coach when Anderson was struggling.

"Days went by when I knew he was down. I just always texted him, uplifted him," said Bayless, the Sun Belt player of the year who almost gave up football, but Anderson refused to let him quit. "Just to get this [win] for him, it's an honor. I just appreciate him for not giving up on me through all the things we've been through."

And the Red Wolves never gave up on Anderson.

When asked last week how he kept this team together this season, Anderson quickly responded: "Honestly, I feel like they're the ones keeping me intact."

The season culminated in a stirring bowl victory -- the second of Anderson's ASU tenure -- and an 8-5 finish.

At the end of his news conference Saturday night, Anderson was asked what's next for him. The answer was simple: He's going to spend time with his family.

He plans to head to Texas soon to visit his father, who is ill. He's also headed to Colorado on a ski trip with his three children, who celebrated at the Cramton Bowl with their dad.

"Next week is gonna be really good, in my opinion, because it's gonna be me and my kids and a cabin on the slopes in Colorado, with the phones turned off and just spend some time together," Anderson said. "We have not had an opportunity to do that since August.

"The collateral damage for me going back to work was I haven't had time to spend with my kids. And they were ready for me to go back. They knew I needed to and that it was what Wendy wanted me to do. She'd even talked to them about it -- about, 'Make sure Dad goes back to work, get him back to the guys.' "

On Saturday night in Montgomery, Anderson savored every waning moment of the season with his guys.

"As tough as it's been," Anderson said, "I think it took every step along the way for us to really come together and get to this point.

"I'm proud of the guys and excited for them. It's a good way to spend Christmas, I'd say." 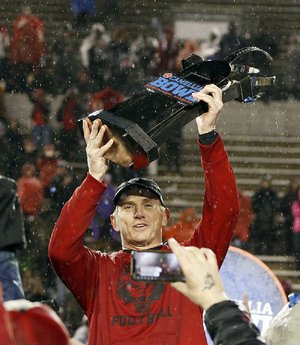 Photo by Special to the Democrat-Gazette/Butch Dill
Arkansas State Coach Blake Anderson hoists the Camellia Bowl trophy Saturday night after the Red Wolves’ 34-26 victory over Florida International. The victory capped an 8-5 season for Anderson and the Red Wolves.