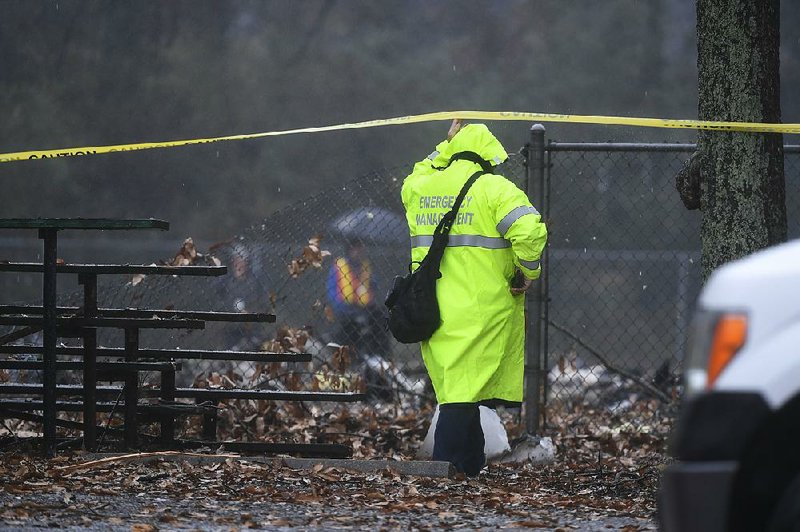 An investigator works at the scene of a small plane crash in a park in Atlanta on Dec. 20, 2018.

Central Flying Service, which bills itself as the state's oldest general aviation company, is one of several defendants in lawsuits arising from the crash of a private jet in Georgia a year ago that killed four executives of a Memphis company.

The four executives were aboard a Cessna 560, a popular twin-engine business jet, that crashed shortly after takeoff from Fulton County Airport-Brown Field shortly after noon on Dec. 20, 2018. Its destination was Millington-Memphis Airport in Millington, Tenn.

The aircraft was owned and piloted by Wei Chen, the founder and chief executive officer of Sunshine Enterprise Inc., a North American distributor of Chinese construction and industrial equipment based in Memphis.

One was filed by Zhaohui Xu Chen, who is Wei Chen's widow and the mother of their three children. The other lawsuit was filed by survivors of the remaining three company executives who died in the crash.

Both lawsuits focus on the installation of a flight navigation system on the aircraft, which was performed by Central Flying Service staring in August 2018. The work was completed in early September 2018.

They include Hill Aircraft, which Wei Chen engaged to manage the aircraft; Duncan Aviation of Atlanta, which performed work on the aircraft's autopilot system in July 2018 and again in October and December 2018; Eagle Aviation of West Columbia, S.C., which performed "extensive inspection, maintenance and repair" on the aircraft in October 2018; and Pinnacle Air Network, which is an alliance of more than 20 general aviation companies, including Central Flying Service and Eagle Aviation.

Chen Aircrafts, the limited liability company Wei Chen formed to purchase the aircraft, and Zhoaohui Xu Chen, also are named as defendants in the Georgia litigation.

The crash remains under investigation by the National Transportation Safety Board.

Richard Holbert, chairman and chief executive officer of Central Flying Service, said that while the litigation is in its early stages, he expects the company will be held blameless.

"I'm quite confident that between the time we released the airplane on Sept. 4, 2018 -- when the owner accepted the airplane and the test flight checked that all systems are good -- and the crash on the 20th of December in which there were two or three intervening companies that did maintenance on that airplane, that Central will be ultimately absolved of any responsibility," he said.