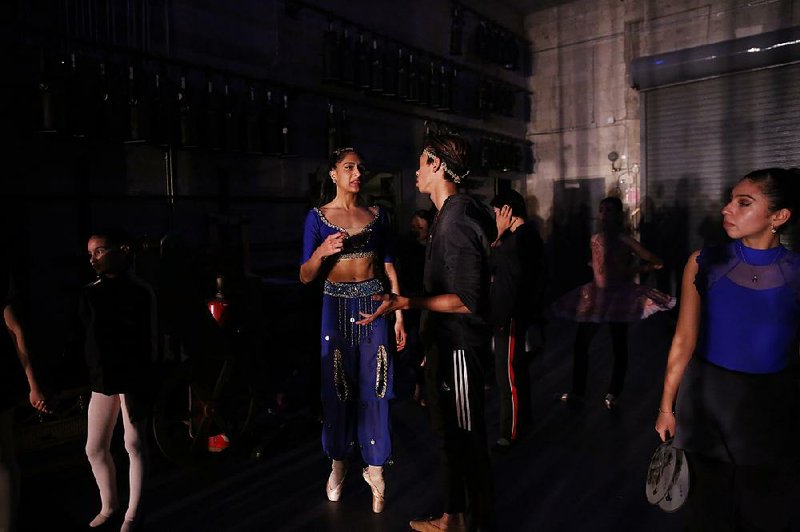 Dancer Lusian Hernandez stretches her feet backstage earlier this month during a rehearsal of Vladimir Issaev’s rendition of The Nutcracker in Fort Lauderdale, Fla. (AP/Brynn Anderson)

MIAMI -- Lusian Hernandez's eyes watered when she recalled receiving a free pair of pointe shoes after arriving in Miami on a dance scholarship as her native Venezuela descended into an economic crisis.

On a recent night, Hernandez appeared on a south Florida stage in a burgundy gown for the opening scene of The Nutcracker. She glided through the scene, hugging the lead, Clara, and waving to guests during the Christmas Eve party scene of the holiday favorite.

Hernandez, 25, is a professional dancer for Arts Ballet Theater of Florida, a Miami school and company that has built a reputation as a haven for the Venezuelan dancing diaspora. More than 20 dancers of Venezuelan origin are playing roles in the holiday production, from tiny mice gobbling cheese to snowflakes waltzing in a winter land.

Some of these dancers are seeking asylum with their families. Others, such as Hernandez, have secured visas and green cards through the company or their parents' work.

"Dancing has saved them," said Ruby Romero-Issaev, the Venezuela-born executive director of Arts Ballet Theater of Florida. "The parents feel they are protected here."

Venezuelans have been drawn to the school and company in the Miami suburb of Aventura because of its Russian artistic director -- a familiar name in the ballet scene of the South American nation. Vladimir Issaev, husband of Romero-Issaev, left the former Soviet Union when he was hired to be ballet master at the National Ballet of Caracas, working alongside late choreographer Vicente Nebrada from 1987 to 1997 before founding the school and company in Florida. Issaev had worked as a ballet dancer and graduated as a choreographer from the GITIS institute, a leading arts school in Moscow.

Famous for adding a modern theatrical style to ballet, Nebrada heavily influenced Issaev. And Issaev says he, in turn, persuaded Nebrada to create versions of classic ballets the Venezuelan initially shunned such as Romeo and Juliet, Swan Lake and Coppelia.

Issaev is credited with training a generation of Venezuelan dancers in Caracas who have become prima ballerinas, principal dancers and soloists at U.S. dance companies.

As the economic crisis worsened in Venezuela over the past decade, old acquaintances of the Issaevs began recommending the school in Miami to families moving to Florida.

Despite late President Hugo Chavez's initial intentions to expand access to the arts, critics say the leftist government was inconsistent and raised tensions with artists, which kept audiences away. Dance companies have been closing their doors as cultural institutions have received less state funding. Professional dancers have left for Argentina, Chile, Uruguay and the U.S.

Back in Florida, Issaev stood in the back of a theater in Fort Lauderdale facing the stage during a rehearsal and spoke to the dancers through a microphone in a Russian-accented Spanish. Not all are Hispanic. Some are U.S.-born or from countries like Brazil and China.

Some of his teenage students are waiting for asylum proceedings as they continue to train in Vaganova technique, a rigorous Russian ballet method he follows.

Paola Nava, 17, arrived in 2015 and is now a senior in high school. She hopes she and her parents will be granted asylum so she can go to college and continue to dance. She considers herself lucky to be dancing with a full scholarship. In her native Maracaibo, her school was canceling performances. She remembers the choreographer created routines that could be danced with soft slippers because many families couldn't afford the pointe shoes.

"The obstacles were just too many," Nava said.

The dancers in Miami often organize collection drives to send ballet shoes, leotards and costumes to a school in Barquisimeto, Venezuela, which is Lusian Hernandez's hometown.

Hernandez continues to perfect her skills and learn from the Russian choreographer.