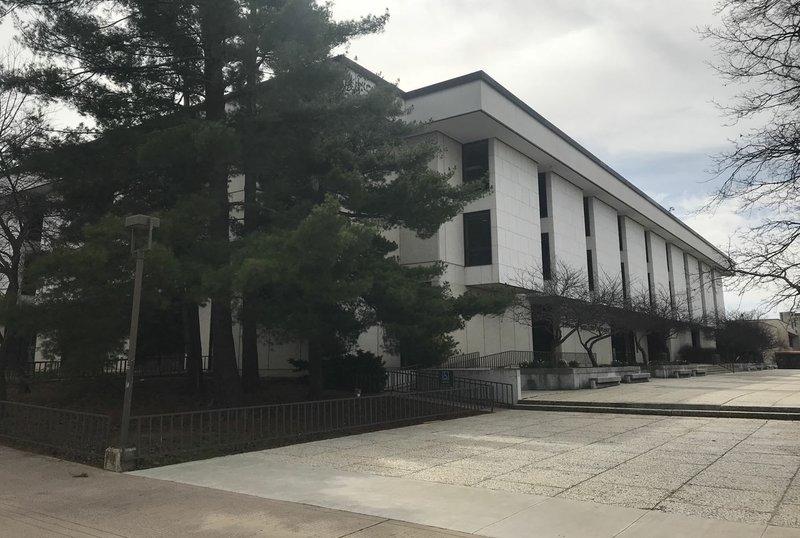 Mullins Library on the University of Arkansas campus in Fayetteville is shown in this file photo. (NWA Democrat-Gazette/ANDY SHUPE)

FAYETTEVILLE -- The main campus library at the University of Arkansas, Fayetteville has temporarily closed two floors to prepare for an estimated $23.5 million renovation.

In the fall semester, the third and fourth floors of Mullins Library had been almost completely empty of shelves and books. At a Nov. 22 event, students were allowed to doodle on and graffiti third-floor walls.

Colorful drawings --and the occasional off-color message, as well as more than one "Ok Boomer" -- almost completely covered the third-floor walls by the end of the semester.

The 18-month renovation project, once complete, will add seating for students and return some books to the library, said Dennis Clark, UA's library dean since August.

Most of the approximately 1.2 million books and other printed materials once housed at Mullins Library were moved beginning in the summer of 2018 to an off-site storage facility, about three-fourths of a mile from the main campus.

Once the renovation is complete, "we'll have 225,000 volumes on the third and fourth floor of the building," Clark said in November.

The removal of books came about as library officials pledged to provide more study space for students and after years of declines in the number of books borrowed.

Students can still check out the books now in storage, with workers making several trips per day to retrieve requested items, library officials have said.

In 2017, the renovation -- which does not involve the library's lower levels -- was estimated to cost about $17 million.

Clark said work had been delayed for about a year because of a lack of fire suppression sprinklers and a need to boost the capacity of the building's air conditioning and heating system. Clark said this has added cost to the project.

The top floors of Mullins closed Friday after final exams. The first phase of the renovation involves the abatement of asbestos, Clark said. One design goal is to provide electric and USB power at tables to more conveniently allow students to plug in their laptops and devices, Clark said.

"About five years from now, we'll begin the second phase of the renovation, which will be the first and second floor of the building," Clark said.