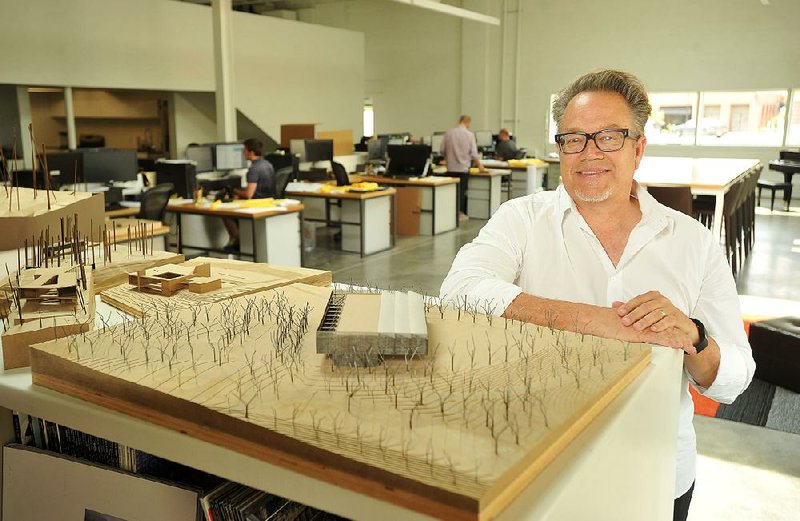 Marlon Blackwell is shown at his office in Fayetteville in this 2016 file photo. (NWA Democrat-Gazette/MICHAEL WOODS)

A Fayetteville architect designed the new Pine Bluff casino resort, but a Memphis design firm is taking credit for it, according to a lawsuit filed in U.S. District Court for the Eastern District of Arkansas.

"I don't think they would have come up with this design in 100 years," said Marlon Blackwell. "It's not what they do."

According to the lawsuit, which was filed Dec. 20, HBG Design of Memphis made some minor changes but the overall design is still Blackwell's.

Mark Henry, Blackwell's attorney, said Saracen Development is the Arkansas corporation that will operate what will be called Saracen Casino Resort. Saracen was a Quapaw leader who is buried in Pine Bluff, according to quapawtribe.com.

Construction on the $350 million project has already begun. Plans are to have the casino open by June 1. Besides a casino, the resort will feature a 300-room hotel, a spa, restaurants, a conference center, an entertainment venue, and a museum and cultural center that will open early in 2021. Saracen Casino Annex, which opened in September, has 300 slot machines.

Blackwell said he has done work over the past five years for the Quapaw Nation, and he considers Berrey to be a personal friend.

Blackwell said Berrey approached him in 2017 about designing the casino, and he'd done a considerable amount of work on it since then.

Blackwell suggested bringing HBG in on the project because the company has extensive casino design experience. The architectural fee was to be 6% of the project's overall budget, according to the lawsuit. Blackwell's firm was to get 34.42% of the architectural fee, with the rest going to HBG.

Blackwell was getting the lesser amount because his firm had done the front-end design work, and HBG would ultimately put in more time on the project, said Henry.

"But instead of honoring these agreements, HBG and the Quapaw Nation have stolen MBA's copyright-protected architectural designs for that project, and refused to pay MBA what it is owed for its work on the project," according to the lawsuit, which refers to Marlon Blackwell Architects as MBA.

Henry is asking for a judgment against HBG and Saracen Development of "a sum not less than $4,452,227," according to the lawsuit. He's requesting a jury trial.

According to the lawsuit, things were going fine until early March, when something happened to cause Berrey to become "angry and agitated" at Blackwell's firm.

HBG representatives -- including HBG's principal Rick Gardner -- "misled and misinformed" Berrey about the Blackwell firm's conduct and role in the project, wrote Henry.

"On information, HBG provided false information to Chairman Berrey to exclude MBA from continued work in order to avoid paying the agreed 34.42% fee split," according to the lawsuit.

On March 15, Berrey suggested to Blackwell that "we should part ways on this project," wrote Henry.

"Despite Mr. Blackwell's continuous attempts after that to learn what had gone wrong and how to mend the relationship, those efforts were to no avail," wrote Henry. "On March 26, 2019, Chairman Berrey informed Mr. Blackwell that after 'talking to all of the team' he could not see MBA 'returning in the current capacity.'

"On information, an HBG representative later bragged to a disinterested witness about 'schmoozing the Indians' in order to force MBA off of this project in order to save the agreed 34.42% fee split," according to the lawsuit.

"We don't know fully what happened," said Blackwell. "We don't know why. We have never gotten a formal explanation. We haven't been paid, and we keep telling them they're using our design work."

But Berrey did email a statement:

"We think that Mr. Blackwell is a very talented boutique architect. But functionality and construct ability was lost in our process. We had hoped he was able to mold our specific needs into a great expression of the history of the wonderful Pine Bluff community, but it became very clear he didn't share our vision. We are very surprised by this litigation but we plan to defend ourselves and a very needed and community-minded successful project."

Henry said the lawsuit shouldn't have come as a surprise because his co-counsel, Jack East III of Little Rock, has been trying to negotiate some sort of resolution for months.

Blackwell said he's used to working with clients to build within a budget, so he's open to changing the design when necessary.

Blackwell said the design of the casino and hotel was unique, with imagery related to the Quapaw and the Delta, of which Pine Bluff is a part.

"In many ways, it was the manifestation of John Berrey's vision of coming back to Arkansas," he said.

Blackwell said he tried to reflect that in the design.

Blackwell said he envisioned the hotel tower covered in a blue Indian blanket, with windows in the shape of 18th-century Quapaw long houses.

"The design came about from me imagining a beautiful blanket that welcomed all ... a blanket lifting up in a kind of aspirational way to the sky," he said.

Blackwell's plan used a special blue steel that has an iridescence that allows it to change colors during the day. He said the colors of the Quapaw are blue and red.

Blackwell said the shape of the hotel tower was inspired by grain elevators rising into the sky from the flat horizon of the Delta. He envisioned the blue hotel tower as a beacon of hope.

Blackwell said it was a unique design.

"It's not generic," he said. "It's not something off the shelf. It doesn't look like a typical casino because it's not. ... This was made for only one tribe, for one site."

Blackwell is a professor in the Fay Jones School of Architecture and Design at the University of Arkansas, Fayetteville. He was recently named the winner of the 2020 Gold Medal, the highest honor from the American Institute of Architects.

"You hire one of the best architects in the world, and you don't pay him -- that's what it amounted it," said Henry.

"Plaintiff seeks a permanent injunction against defendants from use of the entire architectural and design works created by MBA for the Saracen Casino Resort project, and from making any further derivative works therefrom," according to the suit.