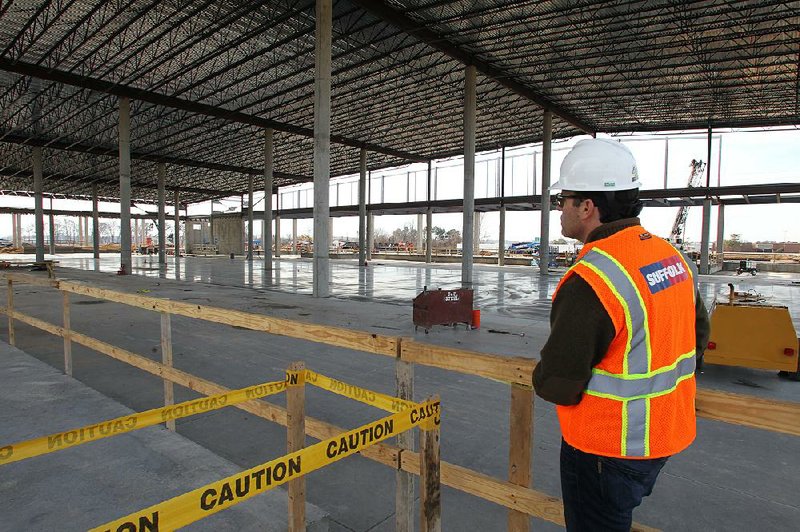 Carlton Saffa, project manager for Saracen Casino Resort, looks over the progress of the building that will house the 80,000-squarefoot gambling floor of the casino. (Arkansas Democrat-Gazette/Dale Ellis)

PINE BLUFF -- In the run-up to the Christmas holiday, work at Saracen Casino Resort continues at a feverish pace as construction crews race the calendar to have the 80,000-square-foot casino open for business in June.

A concrete crew was on site from 1 a.m. to 9 p.m. Monday, pouring and finishing a concrete floor in the casino area, and on Christmas Eve, a small crew of workers labored to finish routing pipe in the central utility plant area -- which, when completed, will supply heating, air conditioning, water, gas and electricity to the more than 500,000-square-foot casino resort complex.

"We're doing the mechanical piping underground for the chillers, and we need to be out of the way for a crew to come in and pour concrete on the 30th," said Allen Dixon, a supervisor with Bernhard Construction, the subcontractor responsible for the central utility plant pipe work.

Once completed, Saracen Casino Resort, situated on 110 acres at Martha Mitchell Expressway and U.S. 63/79, will include 2,000 slot machines and 50 table games where gamblers from around the region can try their luck. The casino itself is scheduled to open for business in June 2020.

And, provided everything stays on schedule, the casino will be followed by a 300-room hotel, spa, restaurants, conference center, an entertainment venue, and a museum and cultural center slated to open early in 2021.

But as the project progresses, as many as 800 construction workers will be on site, said Chris Roper, director of construction for the Quapaw Nation. Once fully up and running, Saracen Casino Resort projects to provide more than 1,000 full-time jobs, with most of those jobs going to residents of Pine Bluff and surrounding Jefferson County.

Those jobs should represent a significant contribution to the economy of the area, which has suffered economically in the past two decades with declining population and a declining industrial base.

Jefferson County and Pine Bluff already are seeing economic benefit following completion of the Saracen Casino Annex and Q-Store, which opened in September. The Q-store and its attached, 15,000-square-foot annex, complete with 300 slot machines of all descriptions, employs more than 250 people and has already begun contributing to the tax base of the area.

The popularity of the new annex was apparent immediately. In the final four days of September, according to the Arkansas Racing Commission, the annex took in over $1.7 million in revenue, paid out over $1.4 million in jackpots, took in just under $270,000 in gross profit, and remitted $35,000 to the state in taxes.

Pine Bluff's share of that money, said Carlton Saffa, project manager for Saracen Casino Resort, would come to just over $200,000, and Jefferson County should receive about $82,000.

"These numbers will skyrocket once the main casino is finished and opened up," Saffa said. "When that happens, we'll have seven times the number of machines that we have operating now."

Quapaw Nation officials said at the outset that their intent was to get the casino up and running as quickly as possible, a point which Dixon confirmed, who said, "This couldn't be any faster a production schedule than any of them I've ever seen."

"We're doing everything we can to beat that date and I anticipate we will," Berrey said. "But, until we get a little further down the road we won't have a good feel for it."

Roper, who oversees the construction project, said weather has been a major factor in the progress, but even with the rain, he said, the project is on schedule.

"We've been able to make up the rain days so far and keep everything on schedule," Roper said. "When we get the roof on and get the building in the dry I expect we'll really be able to make up some time on that. The construction traffic will ramp up to about 800 or more people daily once we're moving full speed."

Roper said most of the metal decking has been placed on the roof of the casino building and workers will begin installing the roof and the exterior walls by the end of December.

"By the first of February the majority of our casino floor should be in the dry," Roper said. "We can really start moving faster then."

Jefferson County is one of four locations that were authorized for a casino by Amendment 100.

Approved by voters through a state ballot initiative last year, Amendment 100 authorized casinos to be placed in Pope and Jefferson counties -- which had no gambling facilities -- and allowed Oaklawn Racing Casino Resort in Hot Springs and Southland Gaming and Racing in West Memphis to expand their operations into full-fledged casinos.

The 2018 ballot initiative was largely shepherded through the electoral process by Berrey, who said the Quapaw people consider Jefferson County to be their ancestral home. The tribe's Downstream Development Authority contributed $3.65 million to the successful 2018 campaign. The Quapaw Nation was the first to apply for a license to build a casino under the new law, at which time Berrey announced that the Arkansas development would be named Saracen Casino Resort in honor of a Quapaw chief who was buried in Pine Bluff in the 1830s.

Although the license application process in Pope County has been mired in controversy and uncertainty, that same process in Jefferson County went smoothly, the outcome a virtual foregone conclusion with the Quapaw Nation of Oklahoma -- a major backer of the casino amendment -- the only applicant for the Jefferson County license.

"We are actually the people who brought everyone together from Southland and Oaklawn and the Cherokees," Berrey said. "We primarily wrote the language of the amendment and paid for the signatures. We were the main driver of that."

Berrey, who has been the elected chairman of the Quapaw Nation for 18 years, said the effort to get the casino amendment on the ballot and secure the license to build the casino in Jefferson County was the culmination of efforts going back years to bring the Quapaws back to Jefferson County.

The Quapaw leader was born at Arkansas Post and is remembered for his kindness to missionaries and other early settlers. He also is credited with the rescue of several Quapaw children who had been captured by Chickasaw warriors.

"Our relationship with Arkansas goes back to before the first non-Indians showed up and it continues through today," Berrey said. "It's not like we're carpetbaggers. We've been there a long time."

On May 1, the first day to apply for casino licensure with the Arkansas Racing Commission, Quapaw officials delivered an application and a $250,000 check to the commission for the Jefferson County license. That application was unanimously approved on June 13, and shortly after, construction crews broke ground on the project, which, once completed, will have a footprint exceeding a half-million square feet.

At the same time, workers began construction of the casino annex on the site of the recently purchased Southern Edge Truck Stop property adjacent to the main casino site. That work was completed in three months, and on Oct. 1, the Saracen Casino Annex and Q-Store was officially unveiled to the public, following a soft opening on Sept. 27.