FILM REVIEW: In 'Uncut Gems,' hang on for dear life

Hustling jeweler Howard Ratner (Adam Sandler) shows off one of his signature items, a gold-and-diamond-encrusted Furby, in Uncut Gems, the kinetic new action movie from brothers Josh and Benny Safdie.

They say some movies are like theme park thrill rides.

Uncut Gems, the new movie from brothers Josh and Benny Safdie, is kind of like that. Because on a theme park thrill ride, you deep down understand that you're safe, that you're only tricking your lizard brain into believing you're in danger by the pulling of g's and the stop-and-start whiplash hurtling around hairpins. On a theme park thrill ride, you see the guardrails, you're aware of the apparatus. Keep your limbs inside the cart at all times and you can probably walk away when it clicks to a stop. You know this, even if your body doesn't.

That's pretty much the same trick the brothers pull off here. You know that's really Adam Sandler, not some scuzzy degenerate gambler being threatened on screen. You know they're not really going to hurt him. But knowing and feeling are different things, and watching Uncut Gems is like being dragged by your lapels through a black-lit mirrored funhouse populated by hard men with murderous eyes while fireworks scream and bang, and a wheedling goblin with the voice of Gilbert Gottfried rides your back. Sound like fun?

Anyway, Uncut Gems begins in the opal mines of northern Ethiopia, where an especially colorful example is being pulled from the ground, before audaciously cutting to colonoscope footage displayed on a hospital monitor. And yes, the opals have gotten deep inside this patient, Howard Ratner (Sandler), a Jewish jeweler operating out of Manhattan's diamond district. Howard has spent 17 months working to acquire (smuggle in) the ragged, raw opal, from which he expects to realize a $1 million profit.

And Howard needs a big score -- his gambling debts are such that he's being shadowed by goons. He's making increasingly reckless bets, hoping to get clear. His creditors are worried and given to violence.

When he gets back to his shop, the Boston Celtics' all-star center Kevin Garnett (playing himself) is waiting, browsing his shop for bling. Garnett and his entourage have been steered to Howard's shop by Demany (LaKeith Stanfield), who specializes in procuring the business of wealthy black athletes and entertainers. (One of Howard's signature items is a gold and diamond-encrusted Furby that comes with a necklace chain.) Howard, a basketball fan, is so excited about his new opal, he has to show it to Garnett -- and for a moment we think that he might be trying to hustle the player, as he goes on about the reputed magical powers of the stone. But when Garnett tries to buy it, Howard refuses, saying he's already consigned it for auction. It's not for sale.

So why did you show it to me? Garnett asks. He's taken with it, he's all caught up in the folklore. He feels a connection with the uncut opal. He wants to borrow it. He's playing a game back home in Boston tonight, game 1 of the 2012 Eastern Conference semifinals against the Philadelphia 76ers.

Howard reluctantly agrees to let Garnett borrow the stone overnight (the first of a series of bad decisions) but not before taking the player's 2008 World Championship ring as collateral. And as soon as Garnett and his crew are out the door, Howard runs out to pawn the ring to raise funds for a bet on Garnett and the Celtics to win the opening game of the series.

But Howard isn't just betting on the Celtics, he's combining it with various prop bets on Garnett's performance -- a six-way parlay, which depends not only on the Celtics winning the game, but leading at half-time and Garnett going over on his projected totals for points, rebounds and blocked shots. Oh, and the Celtics also have to win the opening tip.

Howard's bookie Gary (played by New York sports talk host Mike Francesa) describes this bet as the dumbest he's ever seen. "I disagree. I disagree, Gary," Howard lilts on his way out the door. He thinks he knows that Garnett believes in the power of the opal. Howard is playing a hunch and getting 15 to 1 odds. But if he loses on any component of the bet, he loses.

Somehow the bet comes through. Howard wins -- but his loan shark brother-in-law Arno (Eric Bogosian), to whom Howard owes a six-figure sum, got wind of the irresponsible bet and cancelled it. He doesn't like Howard making wild bets while he still owes him money. He doesn't like that Howard resurfaced his swimming pool either. And he probably doesn't like how Howard treats Dinah (Idina Menzel), his wife and Arno's sister, who's just waiting until after Passover to file for divorce. Howard's got a mistress (Julia Fox) stashed in his midtown apartment.

Howard's in more trouble now. He needs to get his opal back from Garnett, and Garnett's championship ring back to him. He needs to be there for his daughter's school play. He needs to avoid Arno and his muscle. He needs to feed his addiction to action.

Maybe even more than with their breakout 2017 film Good Time, the Safdies throw the audience into the midst of this cacophonous confusion, as the constantly running Howard churns through this dazzling chaos, raising funds and making bad decisions. Sandler, who has proved his worth as a dramatic actor before (Punch-Drunk Love being the prime exhibit), has never been better, or funnier, than he is here. His Howard is forever falling, flailing and failing -- nothing he does ever turns out right, he whines at one point -- but he's determined to stay in the game.

The film revolves around the facts of the actual basketball games, and the Safdies, working with longtime collaborator Ronald Bronstein, have crafted an intricate scenario that relies on the clockwork precision of the performers, who often seem to be riffing in real time. It's a remarkably well-cast movie, and the decision to use charismatic Garnett turns out to be more than just stunt casting. Venerable performers Bogosian, Menzel and Judd Hirsch add ballast, while newcomers like Fox, Keith Williams Richards and Jonathan Aranbayev (playing , respectively, Arno's chief thug and Howard's 15-year-old son) click seamlessly into place. (One might find the casting of exuberant former dress designer turned megamillionaire Wayne Diamond as a slightly outsized version of himself a stretch too far.) It says something about the cultural moment the Safdies are enjoying that Tilda Swinton and Natasha Lyonne lent their voices to the production.

There's a loopy momentum to the way Howard -- and maybe Sandler too -- improvises, finding just the right lies to tell to buy another few seconds in which he might come up with something better.

Though, for Howard, as with any addict, there's probably nothing better than the ride itself. 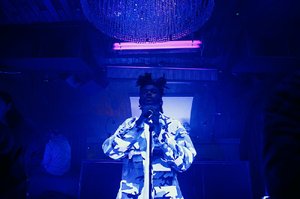 R&B singer The Weeknd plays himself — and has a fight scene — in the Safdie brothers’ Uncut Gems, a seedy crime movie about a gambler trying to outrun his demons. 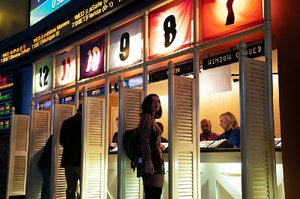