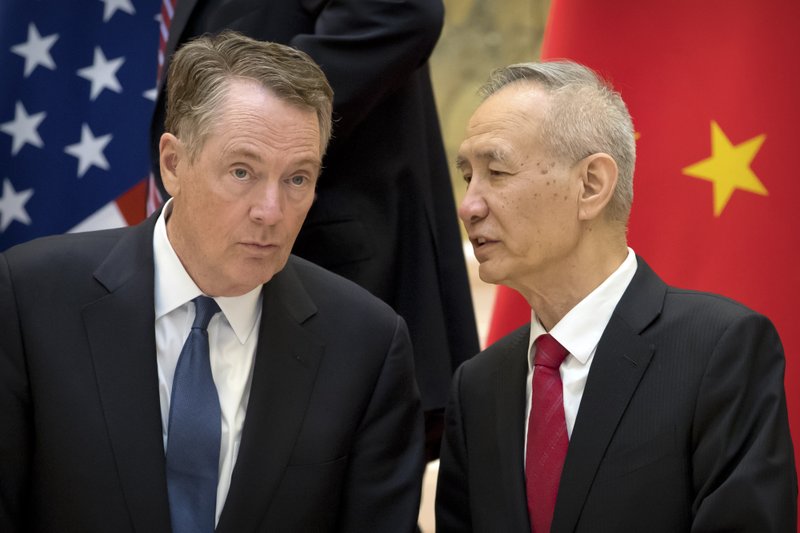 In this Feb. 15, 2019, file photo, Chinese Vice Premier Liu He, right, talks with U.S. Trade Representative Robert Lighthizer, while they line up for a group photo at the Diaoyutai State Guesthouse in Beijing. (AP Photo/Mark Schiefelbein, File)

If President Donald Trump's trade deal with Beijing works as planned, Chinese purchases from American manufacturers and farmers will more than double over the next two years and American investors will finally be welcome to own some of China's financial services companies.

Yet while the "phase one" deal suggests the United States and China are drawing closer, the two countries actually are edging toward a partial economic divorce.

Away from the trade talks, the Commerce Department is poised to issue new regulations to prohibit exports of advanced technologies such as artificial intelligence to China. An interagency panel chaired by the Treasury Department is intensifying scrutiny of Chinese investments in cutting-edge U.S. companies. And the Justice Department last month announced its latest indictment of a Chinese citizen accused of pilfering U.S. trade secrets.

"Selective decoupling is really the unstated policy that's driving all of this," said David Hanke, a partner at Arent Fox, who worked on China-related issues while on staff at the Senate Intelligence Committee.

China likewise is taking steps to extricate itself from a relationship of mutual dependence with the United States. After Chinese telecom giant ZTE was nearly put out of business by U.S. sanctions last year, Chinese President Xi Jinping reemphasized efforts to reduce China's reliance upon American high-tech suppliers. He also is pushing a state-backed campaign for Chinese companies to dominate 10 futuristic industries including artificial intelligence and new-energy vehicles, with specific sector-by-sector market-share goals.

Indeed, tomorrow's technology is the crux of the slow-motion split. After 40 years of ever-closer economic ties, including collaborating on internet, computing and telecommunications breakthroughs, officials in Beijing and Washington increasingly see a potential enemy where they once saw a partner.

U.S. officials worry that depending upon Chinese components could leave critical military, communications and public transit systems vulnerable to sabotage or spying. The administration already has strictly limited the ability of China's Huawei to buy American parts, barred U.S. government agencies from buying the company's equipment and sought to persuade U.S. allies to keep the telecom giant out of their most advanced 5G networks.

"Trump has set in motion an anti-China train that will not be derailed just because the Trade War has been temporarily settled," Andrew Collier, managing director of Orient Capital Research, said in an email.

Aftershocks from the trade conflict are encouraging multinational corporations to shift portions of their supply chains from China to other low-cost countries, including Vietnam and Malaysia. Continuing uncertainty about future tariff rates may chill business investment "at the expense of global economic growth," wrote Collier, a Hong Kong-based adviser to institutional investors.

The tougher stance toward China enjoys bipartisan support on Capitol Hill. In a recent speech, Sen. Marco Rubio, R-Fla., a member of the Senate Foreign Relations Committee, warned that China was seeking to replace the United States as the "world leader in industries such as aerospace, quantum computing and industrial machinery" and needed to be stopped.

"For the first time in three decades, we are confronted with a near-peer rival that seeks to displace us militarily, economically, technologically and geopolitically," Rubio said.

Yet moves to decouple the two countries' technology sectors are being resisted by U.S. industry and its Washington allies. The Commerce Department was expected to make public its export-control regulations in August, but officials have been stalling, according to Derek Scissors, a China expert at the American Enterprise Institute, who supports tighter controls.

The agency last year began work on draft regulations designed to limit exports to China of 14 technologies, such as robotics, biotechnology and quantum computing. Now, nongovernment analysts who are tracking the regulations say the first installment, which is expected soon, will focus on just a handful.

"Commerce's export control draft is so bad. They're going to get attacked for it," Scissors said. "It's a blatant undermining of the will of Congress. They're not doing what they're supposed to."

A department spokesman said only that the rule-making process was "ongoing."

Previously, the committee could act only if foreign buyers attempted to gain control of a U.S. enterprise. The focus now is to prevent China from buying knowledge it can't develop on its own.

At the Justice Department, investigators and prosecutors are in the second year of a "China initiative" designed to thwart Beijing's efforts to steal American technology secrets. John Demers, the assistant attorney general for national security, describes China's approach as "rob, replicate and replace."

This year alone, U.S. attorneys have charged Chinese citizens with stealing turbine technologies from General Electric and medical trade secrets for the treatment of pediatric diseases from an Ohio hospital's research institute.

Last month, a federal grand jury in the Eastern District of Missouri returned an indictment of Haitao Xiang, 42, a former Monsanto employee.

Xiang is accused of stealing a secret Monsanto algorithm called the "Nutrient Optimizer," part of a cloud-based software program that allowed farmers to track the condition of their fields from a desktop.

While working for Monsanto, Xiang applied for the Chinese government's "Hundred Talents Program," designed to reward Chinese citizens who returned from abroad with valuable skills. Beijing uses the program, which often dangles rewards and future employment, "to encourage employees to steal intellectual property from their U.S. employers," according to Demers.

One day after quitting his job in June 2017, Xiang bought a one-way ticket to China and headed for Chicago O'Hare International Airport, the indictment alleges. Federal agents intercepted him before he could board the aircraft and confiscated a 32-gigabyte memory card containing a proprietary Monsanto algorithm.

Xiang entered a plea of innocent to the charges, according to court records. Eric Selig, his St. Louis attorney, declined to comment.

Even as various federal departments toughen their approach, the administration has yet to articulate a consistent strategy toward China. The president has oscillated between accusing China of the "rape" of the U.S. economy and proclaiming China's Xi a blameless "good friend."

Details of the president's initial trade deal with China, announced Dec. 13, remain unclear; the text has not yet been made public. Robert Lighthizer, the president's chief negotiator, says the agreement will mean a sharp increase in Chinese orders for American farm, energy and manufactured goods of $200 billion over two years.

"I'm not one who thinks you can at this point decouple the economy of the United States from China," he said. "On the other hand, we do have major technology issues and other issues of market access and the like that we have to deal with. So, hopefully, this is one building block in building up something that will actually lead to the ability for the two systems to work together to mutual benefit. That's my hope."