Demand is high for Hanukkah doughnuts at Jewish bakery in Maryland by REBECCA TAN THE WASHINGTON POST | December 28, 2019 at 2:49 a.m. 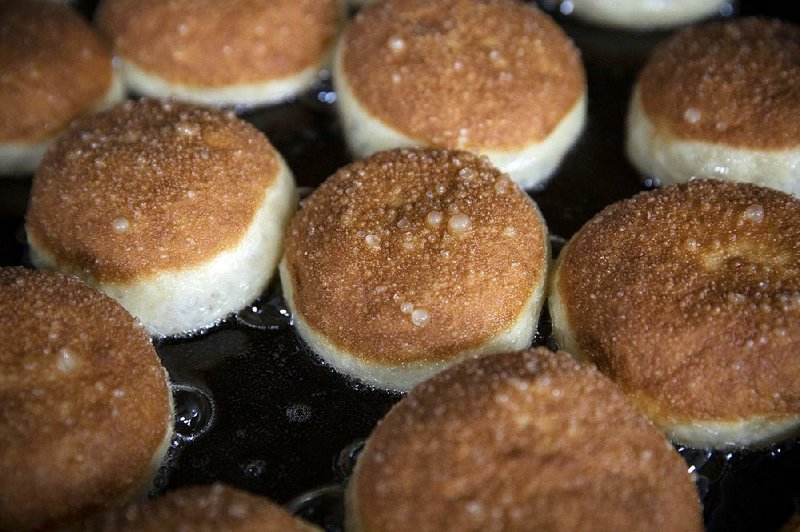 Customers line up to order Hanukkah doughnuts from Shula Eloum at the Kosher Pastry Oven in Silver Spring, Md., on Sunday. Jelly doughnuts are a traditional food eaten by Jewish people during their Hanukkah celebrations. (The Washington Post/Evelyn Hockstein)

It was still dark -- and quiet -- when the first doughnuts were dipped in hot oil.

Hanukkah would be starting at sundown, less than 12 hours away, and the husband-and-wife owners of the Kosher Pastry Oven in Silver Spring, Md., needed to fry, fill and box several thousand doughnuts, an increasingly popular treat for the Jewish holiday.

Hundreds of people from across the Washington region have flocked to the bakery in Montgomery County, Maryland's Kemp Mill neighborhood throughout the eight-day festival to buy the jelly- or custard-filled pastries known in Hebrew as sufganiyot. Every year, the store sells 15,000 to 18,000 of them during the holiday.

"The people, they waiting for this the whole year," said Shula Eloul, 67, who owns the Kosher Pastry Oven with her husband, Arie "Popi" Eloul, 70. In previous years, she remembered, some customers cried when the bakery ran out of sufganiyot on Hanukkah.

"I ask them, 'Why are you crying? Why? It's only a doughnut!'" she said, shaking her head. "They make you feel bad, so you can't disappoint."

Demand has gotten so overwhelming that this year the owners chose not to take orders for the first day of Hanukkah -- unless someone was ordering five dozen or more. Everyone else simply had to turn up at the store and wait in line.

Long before the 8 a.m. opening, Popi and pastry chef Lior Weisman pulled out trays filled with balls of dough from metal refrigerators decorated with order slips. The dough had been kneaded days earlier, but now each sphere needed to be proofed, fried in oil and filled with flavored stuffing before being dusted with confectioners' sugar.

Popi, a friendly, affectionate chef of Israeli-Moroccan heritage, is beloved in Kemp Hill's Orthodox Jewish community. He whistles while he bakes and slips easily -- too easily, his wife says -- into tales from his time in the Israeli army or from his travels through Europe.

He was busy recounting the story of the couple's immigration to the United States when Shula chided in Hebrew, "You need to start on the flavors!"

It was just after 7 a.m. The phones were ringing and Shula had already turned away an extra-eager customer, Mark Schutz, 67, of Bethesda, Md., who had been relegated to waiting in his car.

Schutz, a doctor, has been a regular at the store for decades. When he got married in 1990, Popi made his wedding cake. "I wanted to be first," he said, grinning. "The guy's got golden hands ... I'm happy to wait."

Hanukkah is considered a minor Jewish holiday but has been culturally elevated in the United States because of its proximity to Christmas. It commemorates the rededication of the Second Temple in Jerusalem in the second century before the Common Era, and is observed over eight nights with the ritual lighting of the menorah, meant to mark the "miracle of the oil."

The story goes: After reclaiming the temple, Jewish warriors found a small amount of oil that seemed like enough to light only a sacred lamp for one night. Miraculously, it lasted for eight.

The holiday is celebrated by lighting candles, reciting certain prayers and consuming oil-based foods. For centuries in Europe and the United States, that meant fried potato pancakes called latkes. Now, Jewish Americans are increasingly adding sufganiyot to their menus.

"Latkes used to dominate in the U.S., while doughnuts dominated in Israel. Now, I think both are equally popular in the U.S.," said Rabbi Levi Shemtov, executive vice president of American Friends of Lubavitch, which organizes the annual lighting of a giant menorah on the Ellipse on the first night of Hanukkah.

The rising popularity of sufganiyot in the United States is due in part to their widespread availability, said Jayne Cohen, a Jewish cookbook and food writer. Commercial chains such as Krispy Kreme and Dunkin' have opened kosher stores, meaning they operate under the rabbinical supervision required by those who strictly observe Jewish dietary laws.

And various retailers offer a range of gourmet doughnuts that are perfect for Hanukkah celebrants who don't require kosher certification.

"In hipster Jewish communities, like parts of Brooklyn, you're seeing savory jelly doughnuts, doughnuts with kosher bacon or pastrami," Cohen said. "Very different from the tradition."

At Kosher Pastry Oven, where the doughnuts sell for $2.25 or $2.50 a pop, there are only four flavors -- original raspberry jelly, chocolate, vanilla custard and caramel. Customers say they would not have it any other way.

At 7:40 a.m., Shula spotted Terry Esterowitz, 48, standing outside in the cold. She opened the door, and Esterowitz took a prime spot in front of the cash register, trailed by a dozen others.

"My role is to bring the sufganiyot. It's expected," said Esterowitz, who like many in line was headed to a family party Sunday evening. One year, when she sent her husband to pick up the doughnuts, he made a joke, saying the store had run out. She has never sent him again.

Just after 8 a.m., Popi glanced up from where he was injecting the fried doughnuts with sticky sweet jelly and eyeballed the line of customers, which was just about to snake out of the store. "Uh oh," he said, quickening his pace.

Restless children climbed onto chairs and pulled on their parents' clothes, asking for doughnuts. Friends greeted one another, swapping notes on Hanukkah plans.

Finally, Shula took her position behind the counter.

With a wave of her pen and a gruff "What do you want?" she launched a tidal wave of sales that she predicted would last at least 10 hours.

Esterowitz stacked four boxes between her chin and her hands, and headed out, triumphant. Schutz, in second place, asked for two boxes, one without tape so he could eat a few -- three, to be exact -- on the way home.

Helene Zeltser, 74, was No. 15. She would have come earlier, but she had some trouble getting into her car because of a recent knee replacement surgery. Actually, she confided, her doctor had advised her not to drive at all.

"These sufganiyot are worth it," she said, winking.

Zeltser is a longtime resident of Kemp Mill and a personal friend of the Elouls. When Shula called her name, the grandmother of four picked up her order and blew a kiss to Popi inside the kitchen. Then, with her box of 18 jelly doughnuts, she hobbled out, satisfied. 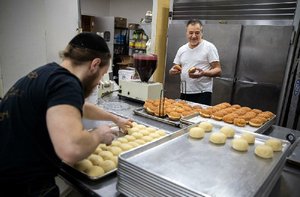