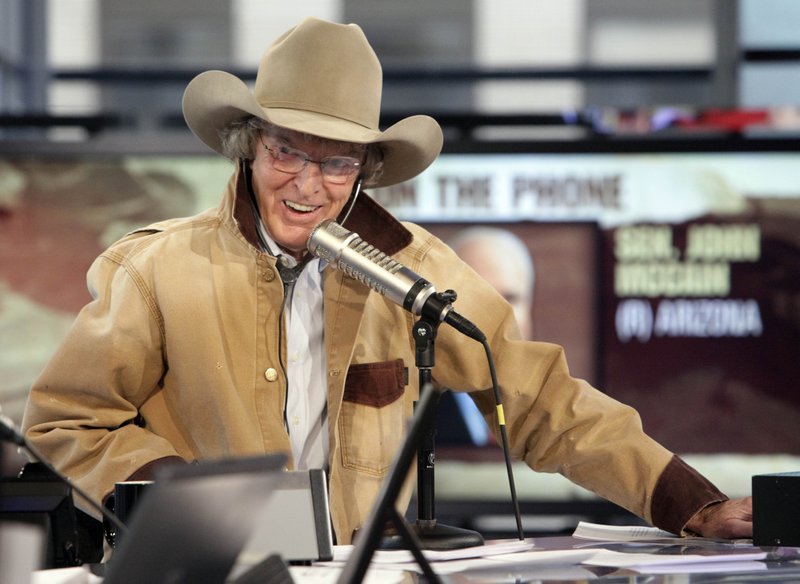 In this Monday, Oct. 5, 2009 file photo, radio personality Don Imus interviews Sen. John McCain, R-Ariz., by telephone during his debut show on the Fox Business Network in New York. Disc jockey Don Imus, whose career was made and then undone by his acid tongue during a decades-long rise to radio stardom and an abrupt public plunge after a nationally broadcast racial slur, has died, Friday, Dec. 27, 2019. He was 79. (AP Photo/Richard Drew, File)

COLLEGE STATION, Texas -- Disc jockey Don Imus, whose career was made and then undone by his acid tongue during a decadeslong rise to radio stardom and an abrupt public plunge after a nationally broadcast racial slur, has died. He was 79.

Imus died Friday morning at Baylor Scott and White Medical Center in College Station, Texas, after being hospitalized since Christmas Eve, according to a statement issued by his family.

Deirdre, his wife of 25 years, and his son Wyatt, 21, were at his side, and his son Lt. Zachary Don Cates was returning from military service overseas.

Imus survived drug and alcohol woes, a raunchy appearance before President Bill Clinton and several firings during his long career behind the microphone. But he was vilified and eventually fired after describing a women's college basketball team as "nappy-headed hos."

His April 2007 crack about the mostly black Rutgers squad crossed a line that Imus had long straddled as his rants catapulted him to prominence.

Despite repeated apologies, Imus -- just 10 years earlier named one of Time magazine's 25 most influential Americans -- became a pariah for a remark that he acknowledged was "completely inappropriate ... thoughtless and stupid."

Imus' unsparing on-air persona was tempered by his off-air philanthropy, raising more than $40 million for groups including the CJ Foundation for Sudden Infant Death Syndrome. He ran a New Mexico ranch for dying children, and often used his radio show to "solicit" guests for donations.

In the decade before the racial controversy, Imus redefined his show by mixing his comedy segments with A-list guests: journalists, musicians and politicians -- including former Arkansas Gov. Mike Huckabee, who appeared on Imus' show several times and allowed the jockey to broadcast from the governor's mansion in 1997.

Huckabee said Friday that he was sad to hear of Imus' death.

"You never knew what mood he would be in but he truly cared about [people] evidence[d] by his unselfish philanthropy for kids with cancer. One of a kind!" Huckabee wrote in a Twitter post.

Imus engaged in a long-running feud with shock jock Howard Stern, who usurped Imus' position as the No. 1 morning host in New York City.

And he angered guests at the annual Radio and Television Correspondents Association Dinner in 1996, cracking wise about Clinton's extramarital activities as the first lady sat stone-faced nearby.

"I talk to millions of people every day," he said in a February 2006 profile in Vanity Fair. "I just like it when they can't talk back."