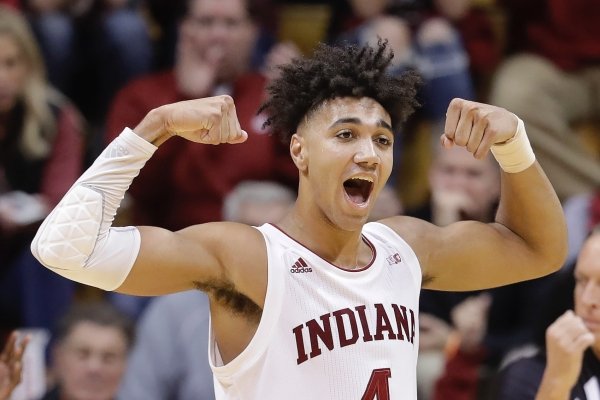 Indiana's Trayce Jackson-Davis (4) reacts after making a shot and getting fouled by Louisiana Tech's Amorie Archibald (3) during the second half of an NCAA college basketball game, Monday, Nov. 25, 2019, in Bloomington, Ind. Indiana won 88-75. (AP Photo/Darron Cummings)

FAYETTEVILLE -- Indiana literally will be the biggest challenge for the University of Arkansas basketball team so far this season when the Razorbacks (10-1) play the Hoosiers (11-1) at 5 p.m. Central on Sunday in Assembly Hall.

"Even at the small forward they're big," Arkansas Coach Eric Musselman said. "So yeah, I think it is probably our biggest challenge so far.

"It might be our biggest challenge all year, too, when you think about their offensive rebounding, their ability to put pressure at the rim.

"I certainly feel like this team, as much as anybody we'll face, has inside presence."

Adrio Bailey, a 6-6 senior, is Arkansas' tallest starter. The only Razorback taller than Bailey who is averaging as many as 16.0 minutes per game is 6-8 sophomore Reggie Chaney.

"We've been undersized in multiple games," said Bailey, who is averaging 7.3 points and 4.6 rebounds. "We just know how to adjust and stick to what Coach Muss has on the script. We try to come out and play to the best of our abilities."

Jackson-Davis, a McDonald's High School All-American who chose Indiana over Michigan State and UCLA, is averaging team-highs of 15.0 points, 8.9 rebounds and 2.0 blocked shots. He's shooting 65.5% from the field (63 of 96) and has been named the Big Ten Freshman of the Week three times.

"Phenomenal player," Musselman said. "He's a great passer out of the post. He's got great vision. He's physically strong. He rebounds. He rebounds out of his area. He's a man.

"He's got a bright, bright future ahead of him. Certainly, he's one of the best freshmen in the country for sure."

Wisconsin is the only team to outscore the Hoosiers in the paint (32-30), when the Badgers beat them 84-64 at home to hand Indiana its lone loss.

"I think that's the big thing -- how to eliminate extra possessions with them," Musselman said. "The one thing that's a killer is if you defend for 25 seconds, they put up a shot, then they get an offensive rebound and you have to go back and defend again for a shot clock.

"That's one of the things we're trying to emphasize, is when you work and put as much energy as you do [into defense] just to not allow second-chance opportunities.

"[The Hoosiers] also have to decide how many guys they're going to send to the glass, because we're pretty good at getting out in transition. We've hurt people that overextend and try to go to the offensive glass, so we're going to have to use our speed in the open court as much as we can as well."

Arkansas has done a good job on the defensive boards as the Razorbacks are rebounding 72.7% of their opponents' missed shots. That's Arkansas' highest percentage of defensive rebounds going back to the 1986-87 season according to Hogstats.com.

"Knowing we're undersized, the only thing we do is get to the details and stick to real technical basketball -- good box outs," Bailey said. "Sometimes you have to double box out. That means sending two guys at one person to make sure he gets out of there."

"Jimmy is a freak of nature," Bailey said. "He gets in there and bangs with the big kids."

Whitt has seven or more rebounds in five games, including 12 at Western Kentucky and 10 against Texas Southern.

"It's crazy, because he's 6-3, but his wingspan is like 7 feet," Razorbacks sophomore guard Desi Sills said. "His ability to rebound is crazy.

"I just appreciate him doing it, because if we're lacking in rebounding, he's picking it up."

Working to rebound against Indiana's size advantage has been a focal point of practice since the Razorbacks returned to campus on Wednesday after a three-day Christmas break.

"We certainly don't want people to go over our backs, so it's important how we utilize our defensive blockouts and some of the old-school technique stuff that Chuck Daly used to talk about when I was around him," said Musselman, who was Daly's assistant coach with the Orlando Magic. "We have to physically defensively block out for sure and play in the post.

"There are some things out of their sets that we're going to [defend differently], that we haven't done in the past. We can always revert back to what we've done all season long if need be."