'20 holds tax cut for high earners in Arkansas; rate in state drops to 6.6% as latest reduction phases in 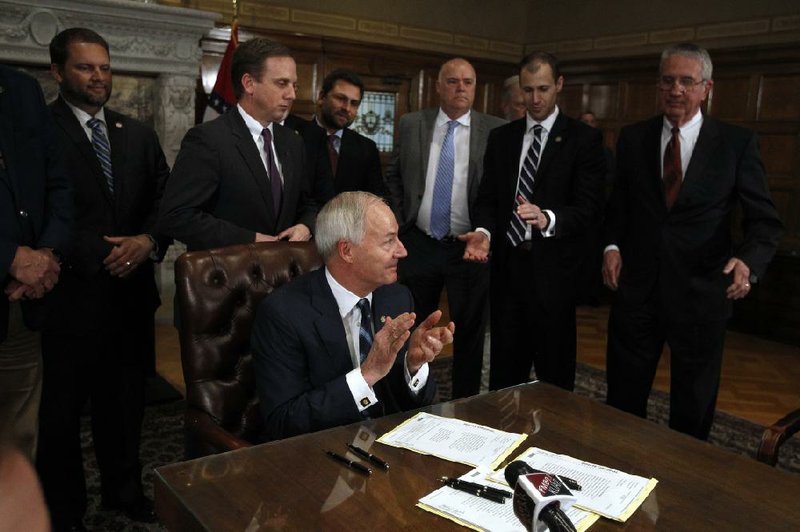 The state's top individual income tax will be trimmed to 6.6%, starting Wednesday.

The rate cut is part of Gov. Asa Hutchinson's plan -- enacted by the General Assembly and the governor in the regular session earlier this year -- to phase in a reduction in the top individual income tax rate over two years. It will drop to 5.9% on Jan. 1, 2021.

"The tax reduction on January 1 is the next step in cutting taxes for all Arkansas taxpayers," Hutchinson said in a written statement when asked about the benefits and drawbacks to paring the top rate.

"This will also make Arkansas more competitive with surrounding states and will improve our ability to keep capital and talent in our state," the Republican governor said. "As long as we reduce taxes carefully based upon a growing economy and government efficiencies, then it is all positive for the state."

The income tax cut is in Act 182, which also cuts the number of brackets in the upper-income table from six to four in 2020 and then to three in 2021.

For middle-income earners, the act creates a top rate of 5.9% in that tax table rather than the current 6%.

It's Hutchinson's third cut for individual income taxes since becoming governor in 2015. The others reduced lower- and middle-income taxes.

Among Arkansas' surrounding states, neither Tennessee nor Texas has an individual income tax.

Arkansas is one of 34 states with major tax-policy changes taking effect on Wednesday, according to the Tax Foundation in Washington, D.C.

"To say that 2018 and 2019 were 'big years' in state tax policy would be quite the understatement," foundation policy analyst Katherine Loughead said in a report issued this month on state tax law changes as of Jan. 1.

"With a major overhaul of federal individual and corporate income tax systems in December of 2017, followed by the U.S. Supreme Court's South Dakota v. Wayfair decision impacting interstate sales tax collections the following June, states have spent the past two years reacting to major federal policy changes, in addition to enacting many of their own state-specific reforms," she said.

In Arkansas, the changes include reducing the corporate income tax; requiring internet retailers based outside the state to collect sales tax on in-state purchases; applying a wholesale sales tax on motor fuels to raise highway funds; and increasing the homestead property-tax exemption.

In this year's regular session of the Arkansas General Assembly, Senate Bill 211 by Sen. Jonathan Dismang, R-Searcy, required a three-fourths vote for approval in the 35-member Senate and 100-member House because it increased individual rates on some taxpayers, even though it won't increase their overall income-tax bills, according to state officials.

The bill cleared the Senate in a 28-5 vote on Feb. 6, after first falling two votes short of the 27 required for approval, and the House in an 82-14 vote the next day. The Senate consists of 26 Republicans and nine Democrats. The House had 76 Republicans and 24 Democrats at that point.

Some Democratic legislators who opposed SB211 said that money spent on tax cuts should instead be spent on other needs, such as more funding for pre-kindergarten programs and reducing the waiting list for services for developmentally disabled residents.

About 579,000 taxpayers will receive a cut under what is now Act 182, the state Department of Finance and Administration estimated earlier this year.

In 2015, the Legislature enacted Hutchinson's plan to cut rates for people with between $21,000 and $75,000 a year in taxable income. State officials projected that cut would eventually reduce revenue by about $100 million a year and cut tax rates for nearly 600,000 Arkansans.

In 2017, the Legislature approved Hutchinson's plan to cut the individual rates for people with up to $21,000 a year in taxable income. State officials forecast that cut would trim revenue by $50 million a year. The tax cut took effect at the start of 2019.

Since taking office in 2015, Hutchinson has repeatedly said that he would eventually like to reduce the top individual rate to 5%.

Asked whether he plans to propose further cuts in the 2021 regular session and, if so, by how much, Hutchinson said a recent written statement, "I have consistently stated my ultimate goal is to reduce the top income tax bracket to 5%.

"The timing of any future reductions depends upon state economic growth and our continued capability to fund essential services," the governor said.

Rep. Lane Jean, R-Magnolia, who is a co-chairman of the Legislature's Joint Budget Committee, said in an interview that the governor "hasn't told me officially, but a lot of people around him think they may be looking at another cut."

The state's tax cuts are pretty significant in the next few years, and they are "still looking at $63 million [for a] Medicaid increase next year," said Jean, who was a co-chairman of the Legislature's tax overhaul task force that met in 2017 and 2018.

"You certainly don't want to leave a state much like what Louisiana and Kansas did where you have to cut service to the elderly or the youth, the kids," he said.

"I think it is still a wait-and-see, at least it is in my book, and see where we are fiscally," said Jean.

Dismang, chairman of the Senate Revenue and Tax Committee, said, "We have one of most complicated income tax systems in the country.

"We need to have simplification [and] I think our constituents deserve that simplification. We have three brackets, plus a number of different cliffs that fall into place," he said in an interview. "I can't speak for the other [lawmakers], but that will be my focus, trying to simplify the tables and make it so that people understand and don't have an accountant or buy software to file a very simple return.

"I think it is great that we have set the top bar at 5.9%. It is going to take a couple of years to carry that through, but I think it is time to focus on the actual code and structure and put simplification in place," Dismang said.

Whether the state can afford that "is part of what we have to find out," he said. "It is nothing that I expect that we would be able to do in a year, but long term I think it is best for our system."

"There are still some recommendations of the tax reform task force that were not implemented because of budget concerns," said Hendren, who also was a co-chairman of the tax task force.

He said these recommendations include some important to business: extending the five-year carry-forward period for net operating losses to 20 years; repealing the throwback rule that's part of the calculation used by Arkansas for the apportionment of income by multistate businesses for income-tax purposes; and creating a nonrefundable income-tax credit equal to the amount of property taxes paid on business inventory with a 10-year carry-forward period.

As part of Act 822 of 2019, the Legislature extended the net operating loss carry-forward period from five to eight years for losses occurring in the tax year starting Jan. 1, and to 10 years for losses in tax years beginning on or after Jan. 1, 2021. That is projected to reduce state revenue in fiscal 2026 by $7.8 million and increase each subsequent fiscal year, eventually reaching $70 million in fiscal 2032, according to the finance department.

"I would think that probably some of those [task force recommendations] would have a higher priority than continuing to drop the top [individual tax] rate, but that is going to be something that is debated in the next subsequent General Assembly [in 2021], so all of that is going to be on the table," Hendren said.

"I think it was important for us to get below 6[%], which at 5.9[%] we are," he said. "I would also say long-term it's important for us to get below 5 [%]. When you get into the 4's, psychologically that has a significant impact on our competitiveness. But that is going to take some time and it is going to take some careful management, so we don't put ourselves in a budget crunch."

Asked whether he is expecting an attempt to cut the top individual tax to 5% in the 2021 regular session, Senate Democratic leader Keith Ingram of West Memphis said, "We'll just have to look at the numbers.

"The economy is very strong right now. We'll just have to look at it when we deal with it," he said. 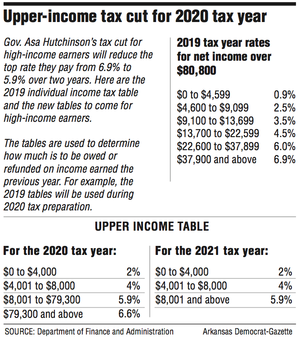