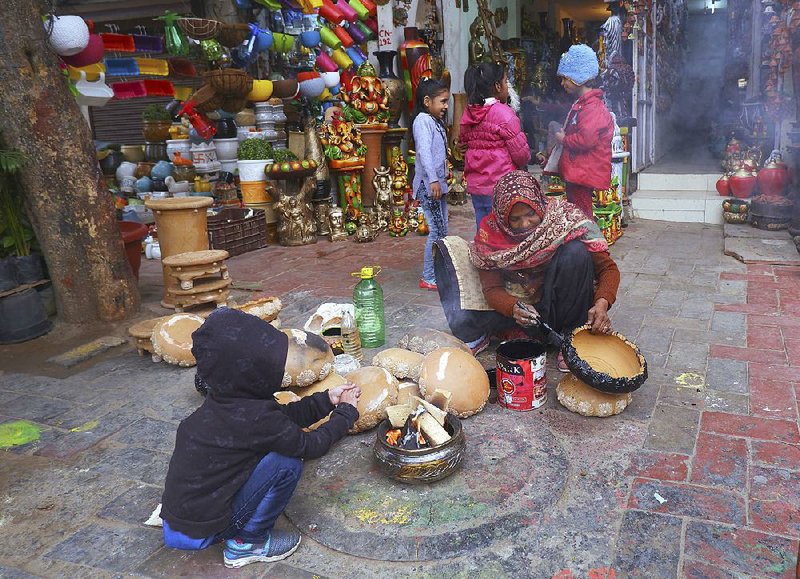 A potter paints as a child warms himself at a fire in New Delhi, where cold and foggy conditions continued Saturday. The temperature dipped into the mid-30s in India’s capital, and this December is expected to be the second-coldest there since 1901, weather officials say.

CAIRO -- Health authorities said that about two dozen people, mostly laborers, were killed Saturday when a minibus collided with a truck on a highway in Port Said in northern Egypt.

Officials said in a statement that the minibus, a vehicle widely used in Egypt as a communal taxi, was taking the laborers from a garment factory in Port Said. The city is about 125 miles north of the capital, Cairo.

At least 22 people were killed in the crash, which took place on a highway linking the cities of Port Said and Damietta, the statement said. The workers were from Damietta.

Eight others were injured, some of them severely. All the victims were taken to hospitals and morgues, the statement said.

Egypt has a history of serious bus and car crashes because of speeding, careless driving, poor road conditions and poor enforcement of traffic laws.

President Abdelmadjid Tebboune gave Djerad the job of forming a new government, a delicate task in the North African nation that's been divided since the emergence early this year of a pro-democracy movement that boycotted his Dec. 12 election after forcing out predecessor Abdelaziz Bouteflika.

In his first public statement, Djerad stressed the need to work together to meet "social-economic challenges and pull ourselves out of this delicate period."

The gas-rich nation's economy has suffered during this year's developments, and Tebboune has not had a smooth transition into office.

Tebboune, widely viewed as the favorite candidate of the military, was discredited in the eyes of the pro-democracy movement for his brief period as prime minister. He was forced out by Bouteflika's brother Said, a special presidential adviser who was recently convicted for corruption along with two former prime ministers and two intelligence chiefs.

Taliban spokesman Qari Yusouf Ahmadi said the militants claimed responsibility for the attack, saying the insurgents also seized weapons and ammunition. The insurgents have a strong presence in Helmand province, especially in Sangin district where the attack took place.

The Taliban have increased attacks in recent days against Afghan army bases and checkpoints across provinces.

The Taliban now control or hold sway over nearly half of Afghanistan. The insurgents continue to stage near-daily attacks targeting Afghan and U.S. forces, as well as government officials, even as they hold peace talks with a U.S. envoy who is working to negotiate an end to the 18-year conflict, America's longest war. Scores of Afghan civilians are killed in the crossfire or by roadside bombs planted by militants.

ALMATY, Kazakhstan -- Technical failure, pilot error and weather conditions are being considered as possible causes of the plane crash in which 12 people were killed and more than 50 injured, officials in Kazakhstan said Saturday.

The plane with 98 people on board apparently struggled to get off the ground, with its tail striking the runway twice during takeoff.

Residents of Almaty were continuing to take flowers and candles to a makeshift memorial near the airport entrance and 49 people injured in the crash were still hospitalized.

Kazakhstan's Interior Ministry said Saturday that the investigation of the tragedy was underway. Police are analyzing documents, audio and video recordings related to the crash, questioning officials and passengers and inspecting the airport's infrastructure.

The Ministry of Industry also said that the plane's flight recorders would be passed on to the Interstate Aviation Committee in Moscow for examination and analysis. 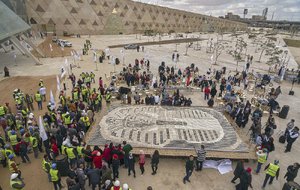 Photo by AP/Hamada Elrasam
Visitors walk Saturday around thousands of coffee cups that were used to create a mosaic of ancient Egyptian King Tutankhamun’s mask in the yard of the Grand Egyptian Museum near the Great Pyramids of Giza. The mosaic of 7,260 coffee cups was created by a group of Egyptian youths and set a Guinness World Record.