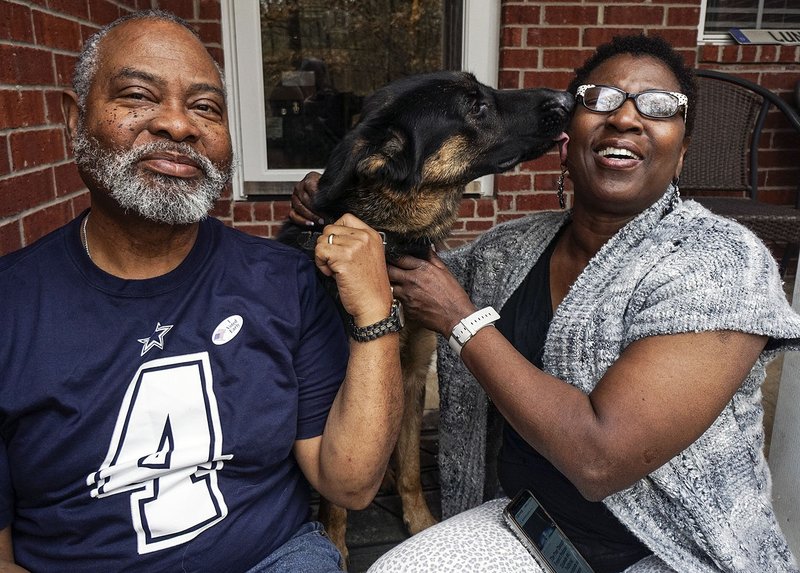 Arkansas Democrat-Gazette/MITCHELL PE MASILUN -- 11/25/2018 -- Darryl Lunon and his wife Barbara Lunon pose for a photo with Bibi at their home in Pulaski County Sunday, Nov 25, 2018.

The effort by a Pulaski County dog owner to hold animal-services officials accountable for failing to quickly reunite him in 2017 with his captured pup -- despite it being collared, tagged, microchipped and tattooed -- was quashed Friday by a federal appeals court.

The three-judge panel of the 8th U.S. Circuit Court of Appeals in St. Louis reversed a district judge's 2018 ruling allowing Darryl Lunon, a championship dog breeder, to pursue a civil-rights case against the county, North Little Rock and each agency's animal-services employees.

Lunon's 8-month-old pup, Bibi, a registered German shepherd with championship lineage, was on its way to being a competitive show dog and, when old enough, giving birth to puppies that would cost $2,500 to $4,000 apiece, when a clap of thunder and a flash of lightning scared the dog and it ran away during an outdoor bathroom break the night of Feb. 14, 2017.

The next day, a neighbor 4 miles away from Lunon's home near Arch Street and Dixon Road found the pup cowering in his garage and called the sheriff's office, which dispatched an animal-control officer. The animal officer said he didn't notice a riveted-on identification tag on Bibi's collar, and booked the dog into the North Little Rock Animal Shelter, which had a contract to house dogs picked up in the county, incorrectly listing Bibi as a male dog.

Someone removed Bibi's collar, and no one from either agency scanned the animal for a microchip or searched for an identification number, which they would have found tattooed on its ear.

Five days later, after no one claimed the dog, it was spayed and put up for adoption. Within another five days, Bibi was adopted.

Lunon, meanwhile, hadn't called or visited the shelter because, not only was he unaware that the North Little Rock shelter housed dogs picked up in the county, but he was confident that if any animal-control officer picked Bibi up, he would have been notified immediately.

He did, however, paper his community with fliers bearing Bibi's photograph. It wasn't until March 18 -- more than a month later -- that Will Quinn, the neighbor who had found Bibi in his garage, saw one of the fliers and called Lunon, relaying what had happened.

Lunon immediately headed to the shelter, which denied picking up such a dog until Lunon returned with a copy of Quinn's report to the sheriff's office. Then he learned that Bibi had been spayed and adopted out.

When the new owner refused to give Bibi back, citing his children's attachment to the animal, Lunon sued him in Pulaski County Circuit Court, resulting in a court order months later requiring Bibi's return to Lunon and his family.

The lawsuit, which began as an effort to retrieve personal property, was then amended to include a new claim that the impounding and sterilizing of Bibi without proper notice had violated Lunon's constitutional right to due process, for which Lunon's attorney, Kenya Davenport, sought compensatory and punitive damages.

The constitutional claim allowed Colin Jorgensen, an attorney for the Association of Arkansas Counties, which was representing Pulaski County, to move the case to federal court.

In October of 2018, U.S District Judge Brian Miller denied the entities' motions to throw out the case, disagreeing with them that the officials were protected by qualified immunity, which shields public officials from liability if their conduct doesn't violate clearly established statutory or constitutional rights of which a reasonable person would have known.

Miller wrote, "Before the government deprives a citizen of his property, the citizen is entitled to notice of the proposed government action and an opportunity to be heard."

He also said Lunon had demonstrated that a genuine dispute existed "as to whether there was a predictable, established practice, approved and furthered by the directors of Animal Control and the Animal Shelter, of not scanning dogs for microchips and waiting for owners to call, in violation of written policy and ordinance."

But in a 12-page opinion released Friday, a three-judge panel that recently heard oral arguments in the case said Miller and Lunon "assumed that defendants are collectively responsible for any due process violation. This is wrong. We require an individualized analysis of each officer's alleged conduct."

The appellate judges wrote, "Lunon's claim is that defendants had an affirmative constitutional duty to learn that he was Bibi's owner, a duty they breached by failing to scan Bibi's microchip." But, they said, U.S. Supreme Court precedent required the district court to examine the law in Arkansas relating to stray animals, and, "At a minimum, these Supreme Court of Arkansas decisions establish that the procedural due process right alleged by Lunon ... was not clearly established at the time of the alleged violation."

The appellate panel noted that the Arkansas Supreme Court has held that animals, defined as "stock," can be seized and sold "without personal service of notice on the owner, and without any kind of judicial proceedings."

They also noted that Lunon's claim is similar to one that the Arkansas Supreme Court "expressly rejected" in 1885. In that case from Fort Smith, a property owner challenged the impoundment and sale of swine found running at large, and the court held that five days' notice by posters in public places was "all that was necessary" to satisfy due process.

"We agree ... that affirmative pre-deprivation notice is not constitutionally required in this situation, when an animal shelter holds a stray dog for more than five days and then adopts out and spays the dog after the owner fails to file a claim," said the panel, consisting of U.S. Circuit Judges James Loken of Minneapolis, Steven Colloton of Des Moines and Jonathan Kobes of Sioux Falls, S.D.

"In addition," the opinion said, "Lunon failed to prove that each individual defendant's conduct violated his right to procedural due process. ... There is no constitutional duty to scan a stray dog for a microchip."

Neither Lunon nor either of his attorneys could be reached for comment Friday, but Jorgensen, representing the county, said he expects that once the case is remanded to Miller, it will be dismissed in its entirety. He said that even though the appellate court didn't address official-capacity claims against North Little Rock and the county, the opinion indicates the judges found no underlying constitutional violation to litigate.

Jorgensen said that in the past year, the county has made some policy changes. He said Kathy Botsford, director of Pulaski County Animal Services, persuaded the Quorum Court to purchase more microchip scanners, which she had sought before the lawsuit, so that workers in the field can scan picked-up animals and, if a chip is found, "take the animal straight to the owner."

Jorgensen said he doesn't know what the county does now with animals it picks up. He referred the Arkansas Democrat-Gazette to Botsford, who was not working on Friday.

Other animal-services employees refused to say whether the county has an animal shelter of any kind, and referred the newspaper to the county spokesman, who is on sick leave.

David Miles, director of North Little Rock Animal Control for 3½ years, said Friday that for at least a decade, the county paid about $100,000 annually to house its stray animals in North Little Rock, but didn't renew the contract in January.

"Evidently, they have some type of facility behind the county jail, but I don't know how many cages there are or how they're operating," he said.

He said that was typical for the number of animals picked up by the county and housed in North Little Rock each year, and, "I don't know what they're doing now with those animals."

"The crazy part is," Miles added, "if we don't take in a stray, it's guaranteed that animal is going to reproduce into eight to 12 animals" in a few months.

"They're going to get sick and die, or get hit by a car, or someone will get mad and shoot them, or they'll reproduce," he said, noting that even if North Little Rock can't adopt out all the animals it takes in and has to euthanize some, it still gets them off the streets -- and until January, off the county roads as well.

It's each animal agency's job "to control the unwanted animal population in our jurisdiction," Miles said.

Expressing frustration about Pulaski County's decision to discontinue its contract, which he said leaves many animals with nowhere to go, Miles said, "It, in my professional opinion, affects four or five other jurisdictions," by increasing the numbers of stray animals in Little Rock, North Little Rock, Jacksonville, Sherwood and Maumelle.

In January, as the county discussed requiring pet owners to license and register their animals. County Attorney Adam Fogleman said that when county animal officers find an animal with no identification, they try to find an owner. If they can't, he said, the animal is held for five days in a shelter and then is either adopted out or euthanized.

The Quorum Court ultimately rejected the license and registration ideas.