Last-minute stand-in ends up standing at the altar 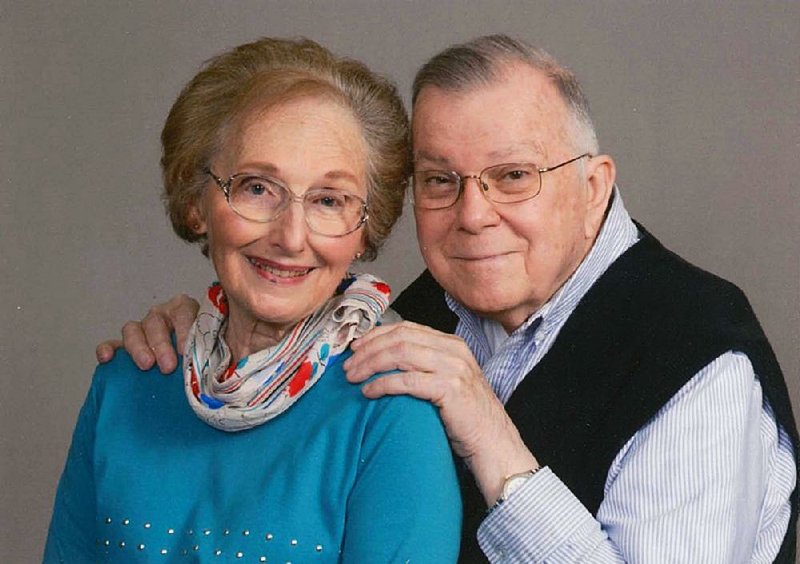 Jan and Dennis Schick just celebrated their 60th wedding anniversary. They worked together for 25 years at the Arkansas Press Association. Jan says she’s not sure she fully comprehended the meaning of “’til death us do part” in their vows. “But here we are 60 years later, and we’re thinking, ‘Good heavens, where did the time go?’” she says.

Dennis Schick filled in as a last-minute substitution on a double-date so his friend could go out with a girl he liked in 1957. His temporary position soon became permanent.

Dennis was in the U.S. Army and stationed at Fort Hood, Texas, and his friend Maurice asked if he would go out with the cousin of the girl he liked. The girl's parents would only let her go on double-dates, and the guy who had escorted her cousin, Jan Davis, on their first double date wasn't available this time around.

She says: “I was impressed with his maturity.”

He says: “She had just graduated from high school. She was neatly dressed and she was cute and perky. She came bouncing out of the door and into the car.”

She says: “If I had any concerns it was about trying to blend two very different families’ expectations for a wedding.”

He says: “I remember rather distinctly standing in the door at the front of the church waiting until they got started and as the music started playing and everything and I remember turning to my best man and saying, ‘What am I doing here?’”

She says: “You want to choose somebody you would choose as a best friend as well as a spouse. There has to be an element of trust, and there has to be a sense of humor. Don’t take yourselves too seriously.”

He says: “You have to tolerate each other’s strengths and weaknesses and make it work. I think you have to give the other person some space and accept their weaknesses just like they’re accepting your weaknesses.”

"I wasn't a big dater and so the whole thing was a little bit unusual for me, but I agreed to go to help my friend," Dennis says.

Jan had just graduated from high school. Her cousin had met Maurice in church, and because of their kinship, Jan's mother had allowed her to go on a double-date with her cousin and the first soldier, but the idea of taking a chance on a second one was a bit much.

Jan had said it was fine when she was asked if it would be OK if Dennis stood in as her date.

"When Mother came home that afternoon and I told her what was going to happen, she said, 'Well, you should have asked first because I don't want you to go with another guy that's older than you and in the Army. We did this one favor, and we don't need to continue,'" Jan says.

Jan didn't know how to reach Dennis, however, so when he showed up she was allowed to go.

Dennis, who had worked in a men's clothing store in high school, was wearing dress slacks and a button-down shirt with a sweater tied loosely around his shoulders. Jan thought he looked like Jackie Cooper.

"He looked much more fashion-conscious than any of the 18-year-old boys that I had dated when I was in high school," she says.

Dennis had wanted to see Giant, with Elizabeth Taylor, Rock Hudson and James Dean, at the drive-in movie theater but Jan's mother thought the drive-in was an inappropriate destination so they went to a theater to see Dragoon Wells Massacre instead.

"Yes, it wasn't very good, but it didn't matter," Dennis says. "I don't remember any more about the evening, other than Jan and I hit it off."

The next time he saw the soldier whose place he had taken on the double date, he asked if it would be OK if he continued dating Jan and was relieved to hear no objection.

Dennis and Jan went out a few more times, but a couple of weeks after they met, Jan left for Southwest Texas State University in San Marcos.

She had previously arranged to return home for a date with another young man to a football game in late September 1957, and when she got there she spotted Dennis on the sidelines with a couple of his friends.

"He seemed a little disgusted," she says of the moment they locked eyes across the field.

She called him the next day and smoothed things over.

"When I went to school, Dennis visited my parents regularly and was getting favorite person establishment with my mother," Jan says. "Mother decided that he was a really nice guy and that it would be OK if we dated."

Jan came home once a month and Dennis, who hadn't had a reason to learn to drive while growing up in New York, sometimes hitchhiked the two hours to San Marcos to see her.

"By the end of the fall semester it was obvious we were serious about each other," he says.

That's when Jan transferred to Mary Hardin-Baylor University in Belton, Texas, so they could see each other more often.

Dennis proposed in December 1958, and they were married a year later, on Dec. 28, 1959, in First Methodist Church in Belton.

Dennis had been discharged from the Army by then and was attending Temple Junior College in Temple, Texas. They both graduated in 1960.

The Schicks moved to Little Rock in 1979, where Dennis became executive director for the Arkansas Press Association -- and Jan became his secretary. They retired in August 2004.

They enjoyed working together over the years and now enjoy being active in church and traveling. They have been to 49 states so far, including a two-month-long journey to Alaska.

"We shared a lot of things together and we were able to travel a lot in the job, go to conventions and so forth," Dennis says. "We have spent a lot of time together on a lot of fun things and a lot of fun places." 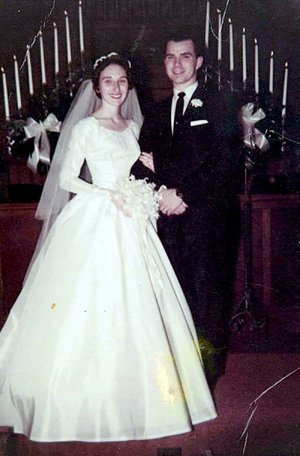 Photo by Special to the Democrat-Gazette
Jan Davis and Dennis Schick were married on Dec. 28, 1959. He wanted to see Giant on their first date, but her mother vetoed their going to a drive-in movie, so they saw Dragoon Wells Massacre in the theater. “Incidentally, years later I spotted the framed movie poster for that movie in a flea market and bought it and gave it to her as a souvenir of our first date,” he says.

Print Headline: Last-minute stand-in ends up standing at the altar