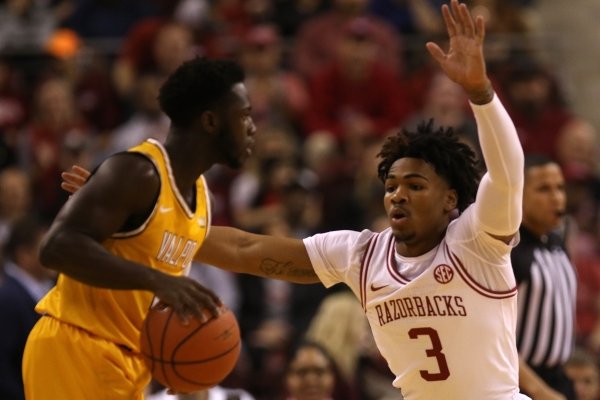 Arkansas’ Desi Sills (3) guards Valparaiso's Donovan Clay (5) during the first half of the Razorbacks' 72-68 win over Valparaiso on Saturday, Dec. 21, 2019, at Simmons Bank Arena in North Little Rock.

Sills, a sophomore who has started every game this season and is averaging 9.7 points, suffered a bruised left knee in the Razorbacks' previous game -- a 72-68 victory over Valparaiso on Dec. 21 -- and played just 39 seconds in the second half.

"The knee is coming along pretty good," Sills said after Friday's practice. "I've been working hard doing therapy, doing treatment each and every day to come back.

"I'll be ready by [today], yes sir. I'll do anything I can to help my team win. Sacrifice my whole body. Just as long as we come out with a W, that's all that matters."

"He didn't do much of our contact stuff, but we still have over 48 hours before game time," Musselman said. "If he still keeps doing as much rehab as he possibly can, we would expect him to be able to play."

Sills scored 18 points at Indiana last season before fouling out with 4:25 left when the Hoosiers beat the Razorbacks 63-60 in overtime in a second-round NIT game.

That was Sills' highest-scoring game as a freshman. He surpassed that by scoring 20 points at Western Kentucky earlier this season.

Indiana Coach Archie Miller was full of praise for Arkansas 6-5 junior Mason Jones, who is averaging a team-high 19.6 points.

"He's a very, very crafty offensive player," Miller told reporters in Indiana on Saturday. "He's got great range, he's got good size ... and he can put the ball on the floor.

"But he also isn't a guy that needs to have [the ball] to be effective. He moves without the ball well, he runs in transition well, they use him very effectively off the ball in space. He can also rebound the ball and go. So he's one those guys that's kind of like a jack of all trades."

Coach Eric Musselman said the Razorbacks were ready to practice on Christmas Day when they returned to campus after a three-day break.

"Honestly, it was the best Christmas Day practice that I've been a part of in five years of college basketball [as a head coach]," Musselman said. "They seemed ready. Normally you're worried about a guy running through the door 15 minutes before a practice starts, but everybody was here early."

Senior forward Adrio Bailey said the older Razorbacks told their teammates to make sure to get in some work during the break.

"Not to just take those days off and sit around and eat," Bailey said. "We told them to stay in the gym and stay active and when you get back, get ready to get back on track because this ship doesn't stop."

Musselman said a coach doesn't always know what to expect after a holiday break.

"Sometimes there's carryover and sometimes there's not carryover," he said. "But I certainly didn't feel that there was any lack of focus or preparation on Christmas Day -- and that can certainly be the case with a lot of teams."

Guard Desi Sills said the Razorbacks watched some film of Indiana during the break that Musselman texted to their cellphones.

"We're all buying in," Sills said. "We all had energy, we were all ready to practice because we knew we had a big game against Indiana."

"Their defense really stands out," Indiana Coach Archie Miller said. "For being a quick team, a very fast team, they use it to their advantage to get in transition.

"They turn you over. They do a great job of really crowding the floor in terms of not being able to feed the post. A lot of teams are turning the ball over throwing it inside."

Arkansas figures to play in front of the largest crowd by far of its three road games this season with Indiana averaging 16,116 fans in its nine games at Assembly Hall.

"We practiced with crowd noise kind of like what a football team might do ... where you can't really hear the play calls and they have to overcommunicate their defensive assignments," Arkansas Coach Eric Musselman said. "We've worked on that as much as we can with doing it in your own practice gym.

"I thought Georgia Tech was pretty loud on the road. Certainly Western Kentucky was as loud as you could experience in a 7,000-seat area, and in a close overtime game.

"It's hard to win on the road for any team on any level, and it's especially hard to win in Assembly Hall. But I think it's a great game for us, for sure."

Indiana beat No. 17 Florida State 80-64 at home, beat Notre Dame 62-60 in Indianapolis and beat Connecticut 57-54 in New York, but Hoosiers Coach Archie Miller said Arkansas doesn't have to take a back seat to any of those teams.

"This will be as difficult of a game as we have played all year," Miller said.

The teams didn't play again until the 2008 NCAA Tournament when Arkansas won 86-72 in a first-round game in Raleigh, N.C.

Last season, Arkansas and Indiana played in the first of a two-game series with the Razorbacks winning 73-72 in Walton Arena. The teams weren't scheduled to play again until today, but they were matched in a second-round NIT game that Indiana won 63-60 in Bloomington, Ind.

So after playing twice in 67 years, the Razorbacks and Hoosiers will meet for the third time in a 407-day span.

Arkansas doesn't have a starter taller than 6-6 Adrio Bailey and Indiana has three starters 6-7 or taller, but Hoosiers Coach Archie Miller is concerned about matching up with the smaller Razorbacks.

Miller said the Hoosiers might play four guards with 6-9 freshman Trayce Jackson-Davis, who is averaging team-highs of 15.0 points and 8.9 rebounds.