There's a novel way to say it with flowers 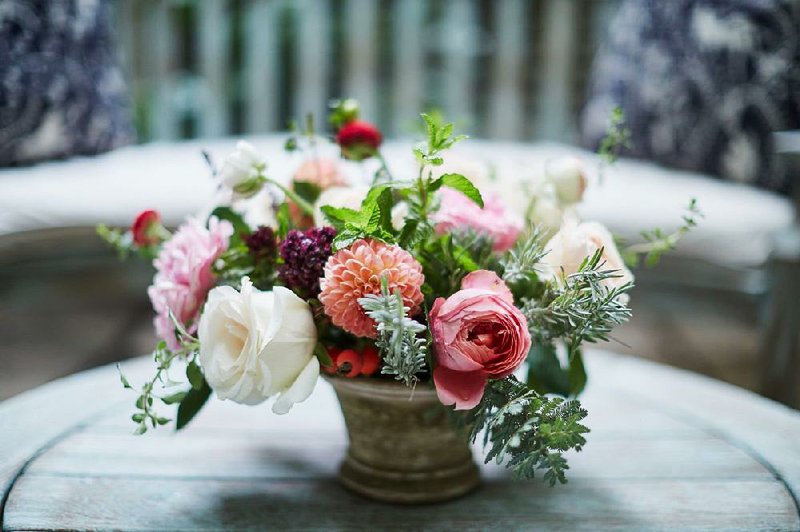 A Cathy Graham arrangement includes dahlias, garden roses and ranunculus plus fragrant rosemary, which signifies remembrance. It would make a nice Mother’s Day or get-well arrangement.

When London flower designer Shane Connolly discusses arrangements with his clients, which include members of the British royal family, he sometimes suggests using a flower that has a special significance.

"Considering the meaning of flowers really adds an extra dimension of thoughtfulness to an arrangement," Connolly says. It could be sending peonies, which represent devotion, for Mother's Day or including rosemary in a sympathy bouquet because it signifies remembrance. In the wedding bouquet Connolly created for Kate Middleton's 2011 wedding to Prince William, some white Sweet William blossoms were mixed in to symbolize gallantry. "Plus that was a nice pun on the groom," says Connolly, who has written several books about the language of flowers.

When you send flowers, you are sending a message. It's up to you to decide how personal or proper the message is. Floriography, the language of flowers, emerged during the reign of Queen Victoria. It assigned meanings to certain flowers so emotions and sentiments could be communicated. Daffodils meant new beginnings, daisies signified innocence, and forget-me-nots meant true love and fidelity. Today, there are many ways to send your message with flowers. And many of the strict rules have been relaxed.

It's no longer expected that you must send an all-white arrangement for a funeral or red roses for Valentine's Day. "Times have changed," says Laura Dowling, former White House chief floral designer. "We are now more open and don't really like a lot of rules. And there are more kinds of flowers available throughout the year." She says peonies, which are the quintessential flower of May, are now available throughout the winter shipped from the southern hemisphere and romantic garden roses are grown year-round in green houses.

Her latest book, Bouquets, which comes out in February, will touch on how a bouquet can communicate a message or tell a story. Dowling says bouquets can tell a personal story or evoke a cherished place or memory. A Mother's Day bouquet for a mom who loves purple and adores the Pacific Northwest could be violets in a rustic wooden box with woodland mosses and ferns. A get-well bouquet could channel a favorite place, pastime or dream.

Ashley Greer, owner of Atelier Ashley Flowers in Alexandria, Va., said clients tend to get stressed about their flower choices. "Some people are very self-conscious when it comes to flowers and their impressions," Greer says. "People think that the flowers they use at an event or that they send are a direct reflection on them. And they want to be careful that their arrangement reflects their taste, their style and the occasion."

Condolence flowers may be what people most obsess about. "When you are sending something for a funeral you want to be sensitive," Greer says. "Sometimes people say they don't want to send anything that looks fun. They prefer something white and green."

Dowling, whose studio is in Alexandria, says condolence flowers "don't have to be all white. Having flowers that are soft and comforting and focus on texture is a good way to go. Make them personal, and possibly reflecting a certain flower the person loved. Then they can really evoke the sense of a warm hug."

New York flower designer and illustrator Cathy Graham says her go-to sympathy flowers include a paperwhite plant and a white or blue hydrangea plant that could bloom for a few weeks. "You don't have to do all white, but I would not use bright, festive colors."

Don't overlook household pets when you are creating a bouquet or arrangement to send to someone, Graham says. "Lilies and other flowers are bad for cats," says Graham, who worries about that with her own two ginger cats, Reggie and Cheddar. The American Society for the Prevention of Cruelty to Animals publishes a list of plants that are poisonous to pets.

The main thing with flowers is don't overthink them. "People are so touched by your making the effort to send flowers that pretty much whatever you send will be appreciated," Graham says.

Anne Chertoff, chief operating officer of Beaumont Etiquette, a New York consulting firm, says it's always a good idea to check on religious practices and customs. "People like to know the rules," she says. "They can think about the message they want to get across. Then it's up to them if and when they want to use the rules or break with them."

For instance, flowers for a funeral often center on lilies. But she says instead of flowers, it's customary for Jews to send or take food to the homes of the family who aren't supposed to cook during the shiva, which lasts seven days, and also to feed people who come to pay respects to the family. "I'm Jewish, so I would send an edible arrangement," she says.

Amy Merrick, a flower designer who ran her own studio in Brooklyn and now focuses on events and teaching, says she has found that many customers don't have a very good knowledge of the varieties of flowers and place more importance on the style or mood of their arrangements. "The average person does have an interest in what flowers represent, but not in the historical context," she says. People are sending their own messages, choosing them based on the personality of the recipient and the personality of the flowers. "I think buying a bunch of daisies signifies this is a sweet, free-spirited personality, whereas an orchid has a more elegant feel to it," Merrick says.

In her new book On Flowers: Lessons From an Accidental Florist, Merrick observes one of the mysteries of a florist's life. Even though she spends her days arranging thoughtful bouquets and compositions for others, "it is an unwritten law of the universe that no one ever sends a florist flowers," she writes. Are they afraid they would be judged or that their message would be messed up?

"I would be so thrilled to get anything," Merrick says. "Flowers are this ephemeral, beautiful expression. To receive them is all about simple delight and joy." 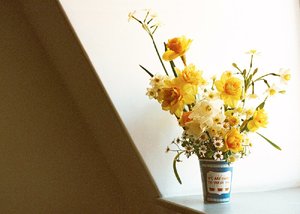 Photo by Tif Hunter
Daisies are good to send to someone who has a casual, free-spirited style, Amy Merrick says in her new book, On Flowers: Lessons From an Accidental Florist.

Print Headline: There's a novel way to say it with flowers