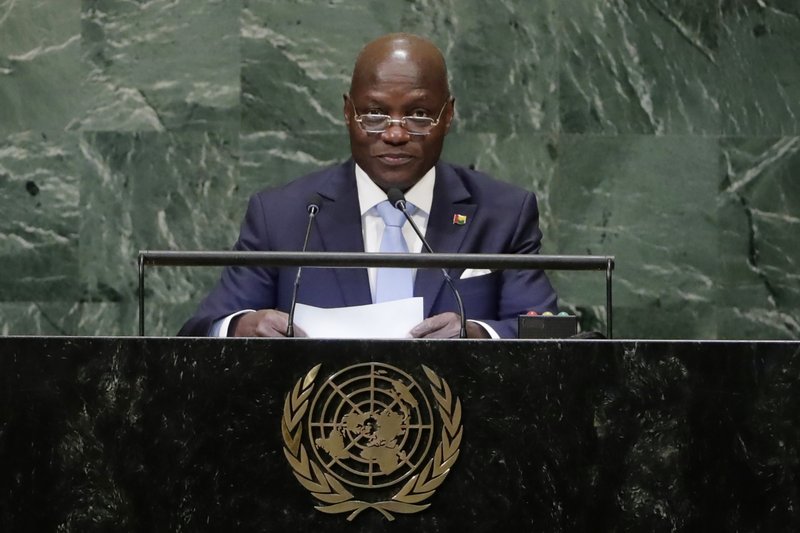 FIEL - In this Sept. 27, 2018, file photo, Guinea-Bissau President Jose Mario Vaz addresses the 73rd session of the United Nations General Assembly at the United Nations headquarters. Two former prime ministers of Guinea-Bissau are vying for the presidency in a runoff election Sunday, Dec. 29, 2019 after the incumbent failed to reach the second round in the tumultuous West African country once described by the United Nations as a narco-state. (AP Photo/Frank Franklin II, File)

BISSAU, Guinea-Bissau -- Two former prime ministers of Guinea-Bissau faced a runoff presidential election Sunday after the incumbent failed to reach the second round in the West African country once described by the United Nations as a narco-state.

President Jose Mario Vaz, in power since 2014, has vowed to respect the results in a rare gesture of political stability. Vaz is the first democratically elected president to complete a full term without being deposed or assassinated since the country's independence from Portugal in 1974.

Linica Correia, 29, said she cast her ballot for front-runner Domingos Simoes Pereira, who finished with 40% of the first-round vote and has since been endorsed by six of the 10 eliminated candidates.

"The Guinean people have already suffered enough," she said. "I hope that the next president recognizes this suffering and works to transform the country by giving back peace and stability to the people."

While there has not been a power grab in Guinea-Bissau since 2012, the country has had seven prime ministers appointed since August 2015. There was enough concern ahead of the Nov. 24 first-round vote that the regional bloc Economic Community of West African States said it had a military force on standby to "reestablish order" in the event of a coup.

The lead-up to the election was bumpy: Vaz fired his prime minister and Cabinet a month before the November vote, sparking anger. The ousted prime minister, Aristide Gomes, refused to step aside and his designated replacement swiftly resigned as regional pressure mounted.

Pereira, the front-runner, has a long history of feuding with the president: Vaz fired him as prime minister in 2015 and refused earlier this year to choose him for the post.

Pereira has cast himself as the candidate who can create the economic conditions that would allow for development in Guinea-Bissau, one of the world's poorest countries.