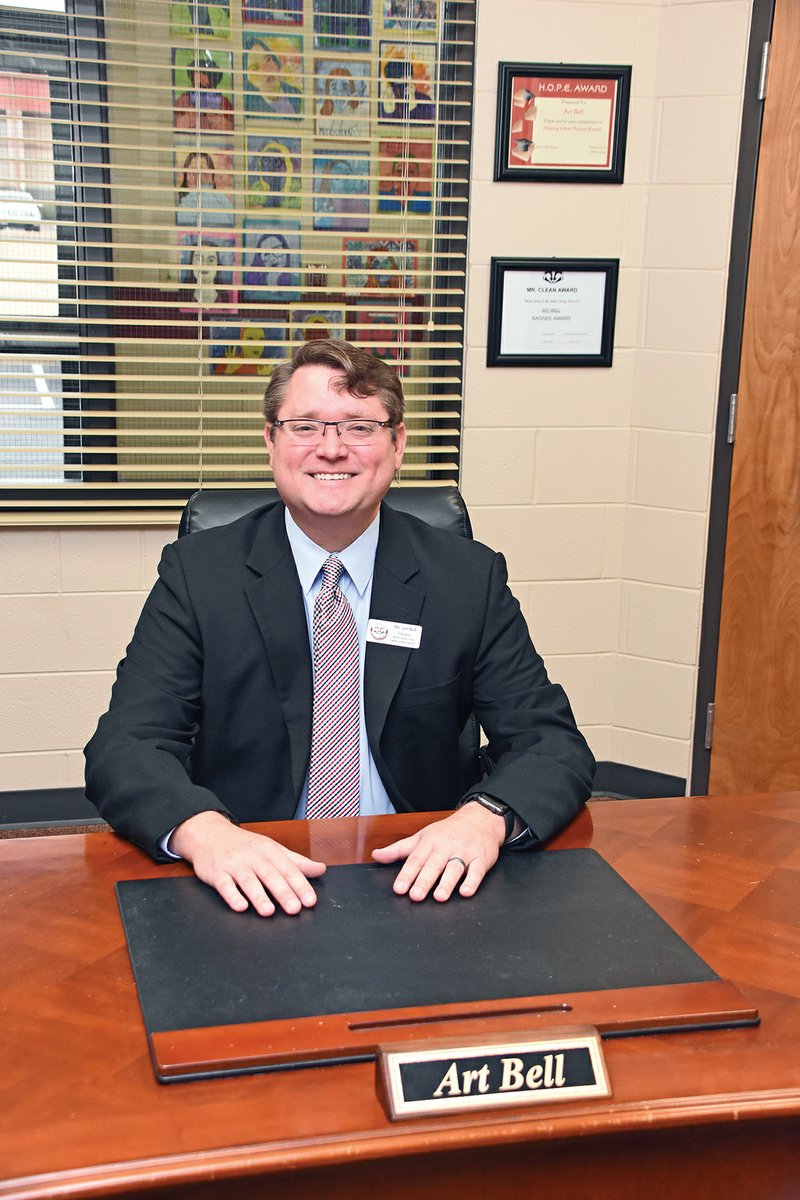 Two years ago, Art Bell traded his basketball coaching position for an administrative job as the Beebe Junior High School principal. Although he misses the excitement on the court, he said, he enjoys the fact that he is able to make a positive impact on even more students.

When Art Bell was a teacher at Beebe Junior High School, he only impacted about one-third of the students, but when he made the switch to administration, that number increased dramatically.

“I get to have a positive influence on 525 students, as opposed to about 100. [I just] have a broader spectrum of young people that I can help,” he said. “Our goal is to prepare them for high school, but at the same time, we want them to enjoy their time here, and as principal, I feel like I can impact more lives and touch more lives this way and in a good positive way.”

Bell has been the principal at Beebe Junior High for two years. Prior to that, he was an assistant principal for a year and was the basketball and golf coach for three years before moving into administration.

“I think building relationships is about being transparent and inviting people in, and Art is committed to building relationships with students, parents and staff that go beyond the school,” Beebe School District Superintendent Chris Nail said. “They buy into what he says, and he has a really good quality about him.”

Nail hired Bell two years ago as principal at the junior high.

“Our test scores have really jumped under his leadership, and the relationships he has built with his kids and staff have been fantastic,” Nail said of Bell. “He has done an excellent job; we are really proud to have him.”

Prior to coming to Beebe, Bell was the senior boys basketball coach at Bald Knob for two years and was not looking to make a change anytime soon.

“In 2014, I was engaged to my now wife, and she is an attorney in Little Rock. We moved to a rent house in Beebe, just to make the commute about halfway for both of us,” Bell said.

“About two weeks after the move, I got a phone call from the varsity boys basketball coach [at Beebe], and he told me the district had a high school social-studies teaching and a junior high head basketball coach position open,” Bell said. “[My fiancee and I] drove from the house to the campus, and we were blown away with the facilities and the community.

“With Beebe, it was just a perfect fit — it just made a lot of sense, and it was definitely the right decision.”

Bell is originally from Searcy. In fact, his parents and sister still live there. He graduated from Searcy High School in 2001. He attended college at Southern Methodist University in Dallas, earning a bachelor’s degree in 2005.

“After college, I knew I wanted to do one of two things, and that was to either coach and be in education or become an attorney,” Bell said.

He went to the University of Arkansas at Little Rock William H. Bowen School of Law after college and passed the bar exam in 2008. He also received a master’s degree in education leadership in 2018 from Harding University and is pursuing a specialist degree at Arkansas State University-Jonesboro to become a superintendent.

For one year, Bell worked for a private practice and is still a licensed attorney.

“I had a calling to education. My true passion was for education and to be around young people. That’s when I made the switch,” Bell said.

“I think Art pulls from all of his past experiences into his leadership style,” Nail said. “I think his legal training helps him with his diligence and preparation.

“He was also an excellent teacher.”

Bell eventually knew he wanted to go into administration, and his first job was as assistant principal in 2017, even though he was only halfway through his master’s program.

“I don’t think I was ready to be done coaching because I do have a passion for it, and I really enjoyed teaching,” Bell said. “But I knew that eventually, this was going to be a path for me, and it was too perfect to pass up.

“I love Beebe, and I love that my first administration job was here. … This is what I needed to do, and this was the right time, but it wasn’t something that I actively sought out. But once I got into it, I realized it was the right choice.”

Being an educator is in Bell’s blood, he said. His grandmother was a teacher, and his mom is retired but worked in the central office for the Searcy School District.

“My parents and my grandparents instilled in me the importance of education, and that drew me to it. They had very high expectations for me as a student,” Bell said.

“But I don’t think they directly influenced me to do either one or anything else, for that matter …,” he said. Just being around educators, my parents instilled in me at an early age that we want to have good educators and good leaders in our schools.

Bell has four goals for his students at the junior high.

“We want them to do their very best, with everything they do, including various extracurriculars,” Bell said.

“We stress the importance of being here, and while they are here, being part of a team. If you aren’t here, you can’t learn,” he said. “Some kids just don’t like school, and we really want to influence those students in a positive way. And finally, we just want their time here at Beebe to be positive.

“That’s simple and generic, but that’s the same message that I deliver with our teachers: Keep a positive attitude, and things are going to be all right.”

Bell said that as principal, he gets to see firsthand just how hard the teachers at Beebe work.

“It is a fulfilling job, but a challenging job, with a lot of hours spent away from school preparing, grading and making sure students are successful in the classroom,” he said. “Beebe has grown, but it still has a small-town feel to it, and we all care very much for it together. … Right now, my current goal is to be the best building principal that I can possibly be for our students, parents and staff and be willing to adapt, change and be open-minded.

“I can always be better than I was yesterday.”

Kieth Williams, an associate professor of education at Harding University in Searcy, has known Bell and his family for more than 40 years.

“He’s done extremely well in a very short period of time,” Williams said of Bell. “He is very perceptive and really savvy — he knows people. He has a good solid background, and his maturity level is high.

“As an educator, Art has done very well, and he has all the attributes that you are looking for. He knows people, and he knows how to communicate with people.”

Bell said he never wants to rule out altogether returning to coaching.

“I’m not going to say that I’m never going to go back because you just never know,” Bell said. “I do miss it. It was exciting, and coaching was one of the reasons why I went into education.

“I was able to build rapport with student-athletes in a different way, but I know I made the right decision going into administration.”