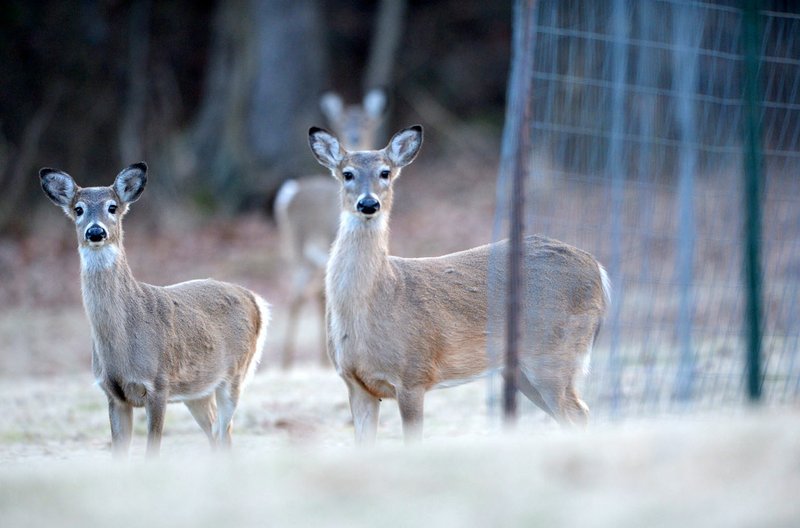 FAYETTEVILLE -- The city of Fayetteville wants residents to follow a state law passed this year prohibiting the baiting and feeding of deer. The law is intended to prevent the spread of chronic wasting disease.

Baiting or feeding deer causes the animals to unnaturally congregate, which helps the disease spread through direct or indirect contact, according to information from the federal Centers for Disease Control and Prevention. Chronic wasting disease is a fatal neurological disease that affects deer, elk and moose. The animals transmit the disease directly through bodily fluids. The disease can be indirectly transferred through contaminated soil, food and water.

For more information, go to:

A state law went into effect in April making it illegal to put out food, scents, lures, grains, minerals or pellet feed for the purpose of enticing, hunting or attracting wildlife. The law has some exceptions, such as for bird or squirrel feeders, using bait to hunt during deer season from September through December, and hand-feeding ducks at a pond.

Meghan Dale, chairwoman of the city's Animal Services Advisory Board, said the focus is education more than regulation. Some people may be well-intentioned wanting to feed deer and not realize it's against state law, she said.

For about a year, residents have approached the board with complaints of deer getting into their gardens or destroying landscaping, Dale said. Board members explored pest management options and reviewed ways other cities have handled the urban deer population, she said.

Education, with city-enforced regulation behind it, seems to be the way to go for now, Dale said. In the meantime, the animal services staff is tracking where the most common human-deer interactions are happening in the city, such as when a car hits a deer. Animal control officers respond to such incidents. A map will help concentrate efforts, she said.

"The concern is if people feed them, then they're drawing them into these more urban places, and it's just going to have the potential to cause more incidents between cars and deer and putting people in harm's way," Dale said.

Aside from refraining from feeding deer, residents should choose outdoor plants wisely, according to a city news release. Deer don't like butterfly bush, holly, purple coneflower or lavender, for instance.

The city may get a call from a resident who suspects a neighbor is feeding deer because the animals keep moving over to the resident's property. Code compliance officers will respond, and if they see any clear signs of a deer feeder or piles of food, they'll leave a note on the neighbor's door to address the situation. After 10 days, if the problem persists, the city prosecutor's office will handle it.

The city program is a policy to enforce the state law, not an ordinance written in city code. Violating the Game and Fish Commission code is punishable by a fine between $250 and $2,500 and/or jail time of up to 60 days.

The exception about baiting for hunting during deer season makes no difference in the city limits, Carver said. Hunting isn't allowed in the city, he said.

The animal board discussed earlier this year the possibility of having an urban deer hunt in the city, but those conversations have been pretty well squashed, Carver said.

"It's basically just a no all-around," he said.

A 2017 survey from the University of Arkansas at Little Rock of 1,032 Arkansas hunters found 79% agreed that the commission had implemented appropriate regulations to minimize the effect of chronic wasting disease on the state's deer.

Most of the documented cases of the disease have been in the vicinity of Newton, Madison, Carroll and Boone counties, according to a map on the commission's website. However, Washington, Benton and 15 other counties in the northwestern part of the state also lie within the chronic wasting disease management zone.

"Fayetteville does have a pretty high population, but so does Prairie Creek out in Rogers, parts of Bentonville, and Bella Vista," he said. "So anywhere that has forested areas of any size along with some protection from predators and hunting will tend to be like that."