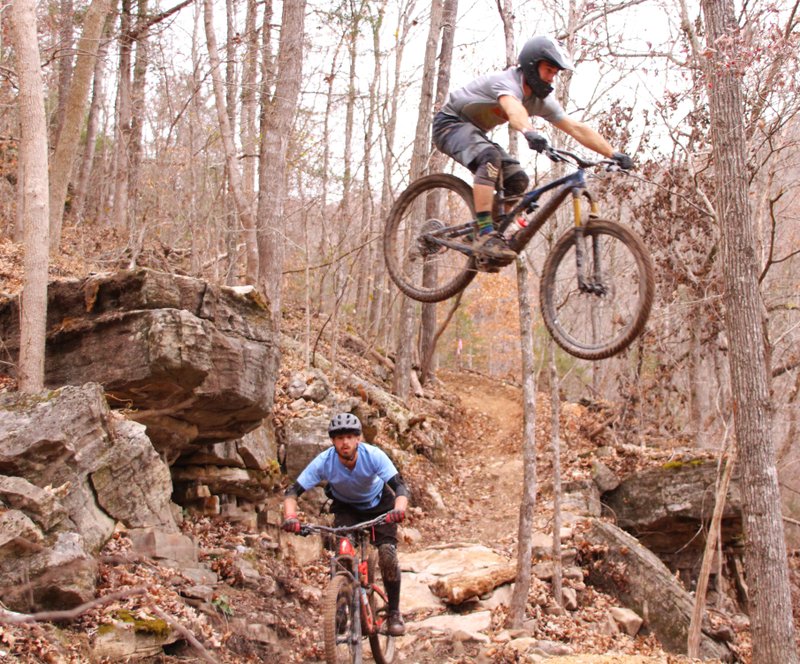 Keaton Weeks vaults on the fly-over as Brett Carter takes the trail down under, on the BOC Trail System at Buffalo Outdoor Center at Ponca. (Special to the Democrat-Gazette/Bob Robinson)

PONCA — The bar for mountain bike trails in Arkansas has once again been raised, this time to resort status, complete with lodging, seven-days-a-week shuttle service, world-class downhill paths and a backcountry airstrip for those who want to drop in for a quick adrenaline fix.

The Buffalo Outdoor Center at Ponca first opened its doors in 1976 when Mike Mills decided to opt-out of med school to try making a living doing what he loved best — canoeing the Buffalo River. In the years that followed, his adventure resort business grew to include canoe rentals, lodging and a retail store. The outdoor center is credited with offering the first log cabin resort in the state.

In 2011, Mills retired and his son-in-law Austin Albers returned to the area to run the business. The enterprise continued to prosper and grow, tripling in size in the last eight years to include a 5,200-square-foot log retail headquarters, 25 rental cabins, two lodges, an RV park, float trips, hiking shuttles, zip-line canopy tours and that backcountry airplane landing strip.

However, in 2012, Albers sensed there was still something missing. Aware of the growing interest in mountain bicycling in the state, he decided a downhill mountain-bike trail system was exactly what the center needed and that the 600 acres on the mountain behind his headquarters was an ideal place to construct one.

Everyone he spoke to at first told Albers the mountain-bike trail was a bad idea. But then he had some discussions with the staff of NWA Trailblazers.

In 2014, with funding support from the outdoor center and a grant from the Walton Family Foundation, at the recommendation of Steuart Walton and Tom Walton, they joined forces to move forward with Albers' project.

After negotiating easements, writing contracts and settling related legal concerns with landowners for the adjoining land right-of-way they would need to route the trail to the front steps of the Buffalo Outdoor Center headquarters, Albers brought in Progressive Trail Design, located in nearby Bentonville.

As a general rule, when Progressive Trail Design (PTD) undertakes a new-trail project, it builds trails for all skill levels. But this mountain was so steep and gnarly the designers couldn't envision any beginner trails.

On the other hand, the mountain's 1,300-feet of change in elevation was an opportunity to create a challenging network unlike anything elsewhere in the Natural State.

Ever since visiting the famous world-class downhill mountain-bike trail systems in British Columbia with an Arkansas contingent of trail builders, Chris Crone, director of operations for PTD, had wanted to bring that advanced caliber of adrenaline-pumping, technical downhill riding to Arkansas. As Crone and PTD took in the steep grade and giant geological features on the center's land, they believed they could re-create the natural, rugged, skill-demanding downhill experience they had relished on popular trails in Vancouver — such as the famous North Shore.

"We strove to create trails that rose naturally and spontaneously with the lay of the land to create a unique technical experience Arkansas has been lacking," Crone said.

PTD began design on the trail in early 2018 and construction in January 2019. Crone says it was a constant design-as-you-build process to take advantage of the most scenic locations and natural features.

With a crew of 12 working nine months, totaling 12,000 man-hours, by the end of September, they had completed the 11-mile BOC Trail System, which includes more than a mile of labor-intensive rock armor-plating.

"We usually construct that many miles of trail in a single month," Crone said with a smile. "That just shows how gnarly this was."

By November, the trails already were attracting more than 100 riders a day on rain-free weekends — without the help of an official advertising campaign. On a recent visit, I encountered a rider from St. Louis who had enjoyed the trails so much on an earlier weekend that he had returned with three of his cycling buds to share the experience. 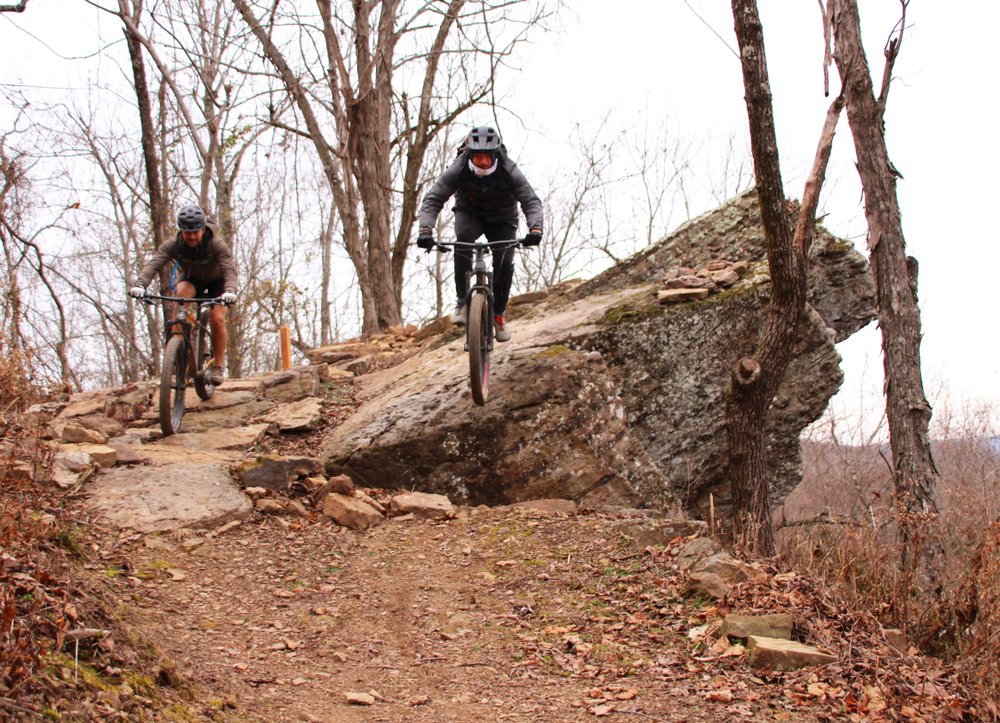 Mike Colombo taking the high line while Eddie Campoman takes the low on the new BOC Trail System at Buffalo Outdoor Center at Ponca. (Special to the Democrat-Gazette/Bob Robinson)

Your mountain bike adventure begins at the massive log building in the center of downtown Ponca. With limited parking at the Buffalo Outdoor Center headquarters, cyclists are encouraged to buy shuttle passes there and then drive to the trailhead parking area at the top of the mountain.

Before heading to the trailhead, riders might want to carb-load with a snack at the deli in the headquarters. But with this also being the shuttle station, riders could return for a much-deserved break in between runs down the mountain. Also, there are no restrooms at the trailhead yet (some are planned).

There is no charge to ride the BOC trails if you provide your own shuttle. Or, for those who believe real mountain bikers don't use shuttles, there is the option to ride the 7-plus miles (with 1,300-plus feet of uphill) back to the top by taking two-way trails.

After buying your shuttle pass, you will drive north on Arkansas 43 for 3.2 miles to then turn left on Fire Tower Road, just across from the Centerpoint Trailhead parking. From there, continue on the 1.5-mile drive across the backbone of the mountain ridge, offering 360-degree panoramic views of the picturesque Ozark mountaintops along the way to the bike trailhead. You also pass several BOC-operated cabins, a lodge and RV park.

Once you have collected your gear and are ready to ride, use your phone to take a picture of the map posted at the trailhead, for reference while you're on the trail and to identify its 11 emergency access locations.

Also, take note of the colorful names of the trails: White Lightning, Mule Kicker and Skull Cracker. These were a tribute by Albers to the rich heritage of the area, using names locals had given to the popular moonshine once produced in these very mountains. 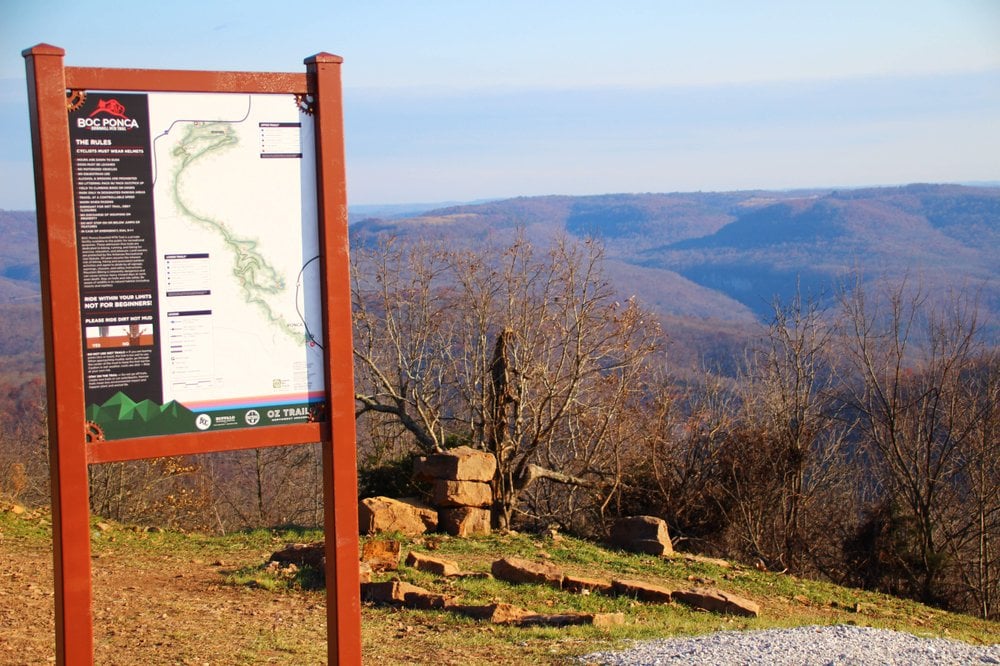 The view from the top of the BOD Trail System includes a sign with some serious warnings. (Special to the Democrat-Gazette/Bob Robinson)

If this is your first visit, it would be wise to warm up on the blue, "Difficult" trails. You can create a 3-mile loop that keeps you on top of the mountain, or you can enjoy a more than 7-mile run on blue trails back to the BOC headquarters.

The blue route to the bottom of the mountain is a good introduction, with some of the mountain's relatively easier rock-slab features. It also includes two miles of giddy, uninterrupted downhill flow. Upon reaching the bottom, your cheeks will be sore from holding a Joker-wide smile during the entire ride.

Once you have warmed up on the blue trails, exit the trailhead parking lot on Upper Miner's Downhill to reach the entry to Lower Miner's Downhill, where you will up your game with a taste of the scale of boulders and loose rocks that fall under BOC's "Very Difficult" category. Do not actually taste the boulders, if you can avoid it.

When you are ready for something more challenging, at the exit of Lower Miner's Downhill, follow the multidirectional trails to circle back around to the entrance of White Lightning for off-camber, on-and-off rock features and crazy-fun gap-drops — for those possessing the proper skill sets.

Riders might consider bypassing the White Lightning Alt Line until they are confident they possess the skills to safely "send it" across gaps, jumps and steep, fast descents over giant boulders that launch riders around tight, sharp berms at max speed. The Alt Line is what motivated the repeat trip to Buffalo Outdoor Center for the above-mentioned St. Louis rider.

Even if you aren't up for taking on the Alt Line, you should park your bike to the side of the entrance to hike alongside this section of trail and admire Progressive Trail Design's craftsmanship, which incorporated tiny house-size boulders and ledges into challenging features. Hiking is also a good way to see cyclists take them on at full throttle.

Once you've pegged your fun meter on the Upper Trails network, jump on the Upper Buffalo River Run to flow down to the Lower Trails. Here you have a choice between Mule Kicker, which at more than 2 miles is the longest sustained downhill run on the mountain, or Skull Cracker, which ends with one of the baddest and most impressive features on the mountain, a 12-foot drop that sails over the bypass route that circles below, to then dive into a tall dirt berm.