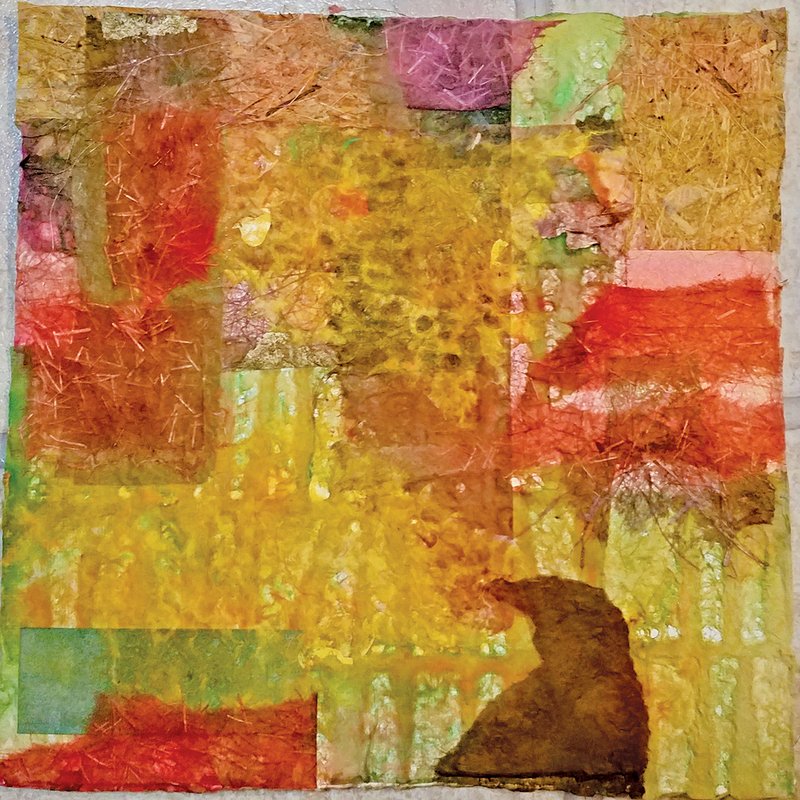 GARLAND COUNTY — Works by three artists in the Tri-Lakes Edition coverage area have been selected for the 2020 Small Works on Paper touring exhibition sponsored by the Arkansas Arts Council. Two artists have had work in previous SWOP exhibits, while one is experiencing her first time to be included in the annual exhibit, which, this year, features works by 35 artists from across Arkansas.

Karen Perry of Hot Springs Village is the first-time artist in the show with a watercolor collage titled Nesting. Michael Preble and Gary Simmons, both of Hot Springs, have been in the show in previous years. Preble’s entry is an original photograph, digitally enhanced, titled Cotton, McGehee, Arkansas, and Simmons’ entry is a watercolor titled Amblers.

The 2020 SWOP exhibit will kick off with a free opening reception from 5:30-7:30 p.m. Jan. 9 at the Mosaic Templars Cultural Center, 501 Ninth St. in Little Rock. Free tickets are available at arkansasarts.org; search under “news and events/what’s new.”

“I’m so excited to have my watercolor collage piece titled Nesting selected to be a part of the exhibition. This is my first entry into SWOP,” Perry said.

“Since moving to Hot Springs Village from Phoenix, Arizona, in 2017, I’ve been very inspired by the natural beauty everywhere,” she said. “The small collages I’ve been making came about as a result of unpacking some small pieces of handmade watercolor paper that I had painted and set aside years ago. I’m so glad I kept them because after learning about a process of painting on handmade rice papers with watercolor, I was excited to collage the lovely papers onto those small pieces of heavy, handmade watercolor paper. Those papers were just 6-by-6-inches, and I mounted them on 8-by-8-by-1.5-inches-deep wood panels.

“After producing several collages this size, I decided to make some larger ones. The larger collages are 10-by-10-inch and mounted on 12-by-12-by-1.5-inch-deep wood panels. But in the case of Nesting, after it was finished, I was immediately struck with the thought that I should enter it into SWOP, so I didn’t mount it to the wood panel. Instead, I went back and read the requirements for the exhibition and sent in the entry form, and I was just thrilled to get the acceptance letter.”

Perry said the collage pieces, including Nesting, are “intuitively constructed.”

“I start by painting rice papers and other handmade papers with watercolor, then tear them up and collage them onto watercolor paper,” she said. “I love to work with color and texture and shape, and sometimes a story goes through my head while the piece is coming together … like, oh this reminds me of blah, blah, blah, or I make up a fictional story as I develop the piece. They aren’t literal representations of a memory or story, but feeling pieces.

“After tearing the brown piece of paper that is the bird in Nesting, I thought it looked like a bird, so the piece became about a bird nesting.”

Perry studied photography at Milwaukee Area Technical College, then transferred to the University of Wisconsin at Milwaukee to study art.

“Life took me to Phoenix, where I finished my degree in studio art at Arizona State University, then completed two additional years to obtain my art teaching certification,” she said. “I was fortunate to teach high school art in Phoenix for 22 years, and now retired, I’m enjoying my passion of making artwork again.

“I’m definitely going to try to attend the opening, as I’m truly honored to be a part of the show,” Perry said.

Preble said he was on his way to New Orleans from Hot Springs in 2018 when he first spotted the cotton bundles at a gin in McGehee, Arkansas, that are the subject of his photograph in this year’s SWOP exhibit.

“I was intrigued by the color and beauty of these gigantic rolls,” he said. “In composition, I tried to get the right balance of shape and form, with just a bit of the gin building peeking out. I then used a series of digital filters for enhancement — in particular, bringing out the color. I have since returned with a more complete documentation during cotton-picking season this year, but this first photograph remains my favorite.

“It is always a special delight to get selected for this exhibition, especially with an Arkansas image,” Preble said. “This is my second selection in three years. In addition to the pictorial and narrative character of the image, the two have an abstract quality that evidently attracted the jurors.”

Preble said that until his retirement in 2013 from the Peninsula Fine Arts Center in Newport News, Virginia, he had balanced careers in curatorship and photography.

“Former curatorial positions include the Portland Museum of Art, Maine; the Bass Museum of Art, Miami Beach, Florida; and the Arkansas Arts Center, among others,” he said. “I am also editor of the William Baziotes Catalogue Raisonné. In photography, I published my Caribbean photographs in the early 1990s with International Voyager Media, Miami. Since then, I participated in museum and gallery exhibitions throughout the South and Mid-Atlantic states, including some 50 art fairs along the East Coast.”

Preble said his original photographs are “in signed, limited editions.”

“Some are nonmanipulated; others have been transformed through digital enhancement that affects hue, line and composition,” he said. “I have an eye for the unexpected and the weird; pattern and serial imagery; asymmetry and heightened color. For inspiration, I look to the pastel drawings of Edgar Degas, the watercolors of John Singer Sargent, the photographs of Henri Cartier-Bresson and Robert Frank, and the 19th-century Japanese woodblock prints of Hiroshige, Hokusai and Kunisada.”

In past SWOP exhibits, Simmons has shown works in charcoal; this year’s entry is a watercolor.

“Amblers is based on a scene I saw in the Garvan Woodland Gardens,” said Simmons, who plans to attend the show’s opening in Little Rock. “I never go there without being mesmerized by the rays of sunlight breaking through the tree canopy and slashing over the paths. It’s even better when that light hits strollers on the path, throwing them into relief against the dark woods. It’s a magical touch in a special environment. These amblers are taking their time enjoying it all.”

Simmons is a nationally recognized pen-and-ink artist. He began pen-and-ink drawing as a science illustrator at Southern Illinois University in Carbondale while a student worker in the zoology department. After acquiring a Bachelor of Arts degree and a Master of Arts degree in English and American literature, he eventually acquired a doctorate in instructional systems technology at Indiana University Bloomington.

In 1973, he worked for the University of Arkansas until he began his freelance artist career in 1976. In 1991, he began teaching in the art department at Henderson State University, where he retired as a professor emeritus in 2013.

Beginning in 1989, Simmons began teaching pen-and-ink workshops nationally for the Rapidograph Pen Co. Since then, he has taught numerous workshops in pen and drawing media for various art organizations and academic institutions. He has an extensive history of gallery representations, shows and awards, including the Arkansas Governor’s Individual Artist Award and the Arkansas Advertising Federation’s Distinguished Educator Award.

Simmons said his interest in media is eclectic. Starting with the pen-and-ink work he is known for, he has expanded his efforts into the areas of watercolor, oil and some pastel. His subject matter is as eclectic as his media but often includes landscape, figurative work and a variety of mythological themes, he said.

This year’s entries in the Small Works on Paper touring exhibition were juried by Jamie Adams, associate professor of art at the Sam Fox School of Design and Visual Arts at Washington University in St. Louis, Missouri. Adams reviewed approximately 300 submitted artworks to select the 39 pieces that are part of this year’s show. He also selected works to receive purchase awards, which are cash prizes equivalent to the value of the artworks. Purchase-award pieces become part of the Small Works on Paper permanent collection.

The 2020 SWOP touring exhibit will remain on display at the Mosaic Templars Cultural Center through Jan. 25.

Following is the remainder of the touring schedule:

For more information on the 2020 Small Works on Paper touring exhibition, contact Cheri Leffew, special events-projects manager, at (501) 324-9767 or cheri.leffew@arkansas.gov. Information is also available at arkansasarts.org.