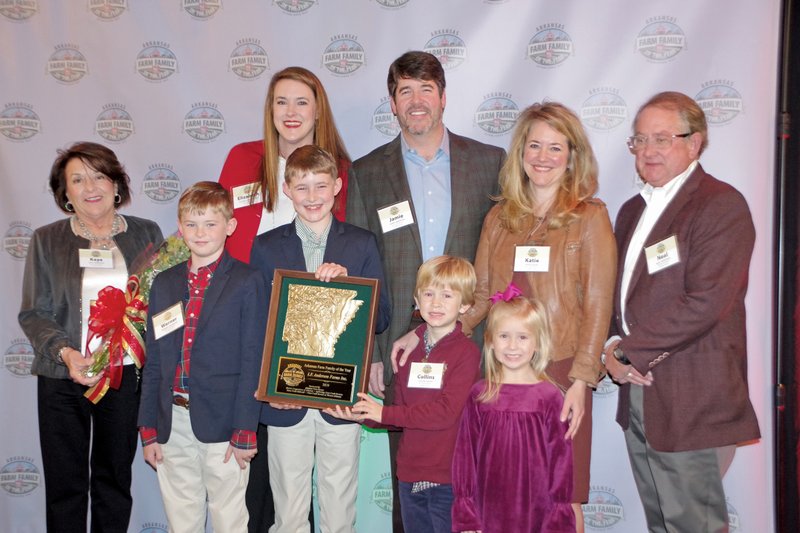 “Wow,” he said, recalling the moment. “We’re just very honored. It was quite a shock. We are all very excited. … We were just honored to be among the other district winners.”

Other members of the family include the patriarch of the family, James “Neal” Anderson, and his wife, Kaye; Jamie Anderson’s wife, Elizabeth, and their sons, Slater, 11, and Warner, 8; and Jamie Anderson’s sister, Katie Siever of Fayetteville, and her children, a son, Collins, 6, and a daughter, Sloane, 4.

“I think I can speak for all farmers. … We don’t do this for recognition. … We do it because we love it,” Jamie Anderson said.

“One behalf of the Lonoke County Farm Family Selection Committee, I would like to congratulate I.F. Anderson Farms Inc. and the Anderson Family on winning the 2019 Arkansas Farm Family of the Year,” said Josh Cunningham, president of the local selection committee and agriculture lending officer for AgHeritage Farm Credit Services in Lonoke. “The Andersons exemplify what the FFOY program is all about with over three generations operating the family farm. They are well respected in the baitfish industry and the local community and will represent the state of Arkansas well for the Southeastern Farmer of the Year in 2020.”

The Anderson family was first named the 2019 Lonoke County Farm Family of the Year, then the East Central District Farm Family. The Andersons will now compete with nine other Southeastern state winners in the 2020 Swisher Sweets/Sunbelt Expo Southeastern Farmer of the Year program in October in Moultrie, Georgia.

“We congratulate the Andersons on being named the 2019 Arkansas Farm Family of the Year,” said Arkansas Farm Bureau President Rich Hillman, a rice farmer from Carlisle. “They have established themselves in the aquaculture industry as the unrivaled leader in baitfish production.

“Fishing enthusiasts may not realize Anderson Farms is the nation’s leading producer of golden shiner minnows. Most of the baitfish purchased at bait shops across the country are raised right here in Lonoke, a fact that we are very proud of.”

Jamie Anderson told the audience at the recent luncheon, “My granddad and great-granddad … they didn’t see this 70 years down the line. Seeing this honor and the fifth generation standing here … thinking of them and this honor is a pretty amazing thing.”

Jamie Anderson said he has told his sons “it’s about time” they both begin to learn the family business.

“Slater has one more summer,” Jamie Anderson said, laughing. “Then he can begin working here. I was 12 when I started. I hope both my sons want to come back here and work. … We’ll push for college first and then hope they will return here. But whatever they choose to do, I hope they are happy. … I want them to do what they love. I hope that working on the family farm is an option for them.

“I am thankful to the Farm Bureau and other supporters for fighting for the family farms.”