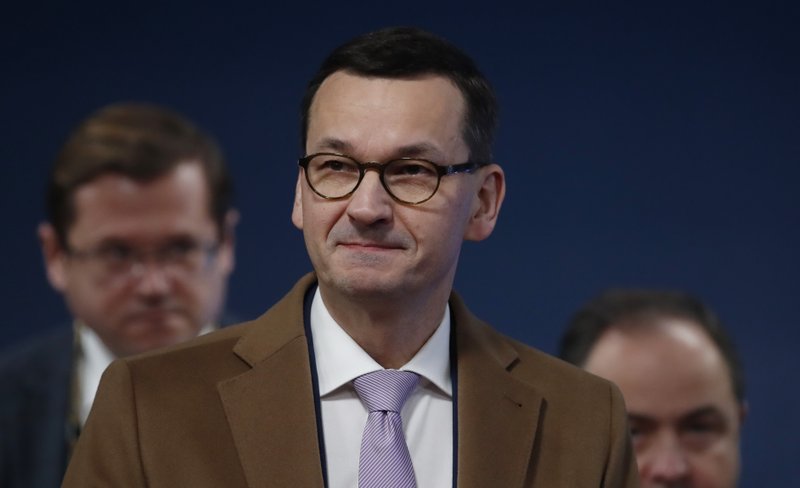 Polish Prime Minister Mateusz Morawiecki arrives for an EU summit in Brussels, Friday, Dec. 13, 2019. European Union leaders are gathering Friday to discuss Britain's departure from the bloc amid some relief that Prime Minister Boris Johnson has secured an election majority that should allow him to push the Brexit deal through parliament. (Christian Hartmann, Pool Photo via AP)

WARSAW, Poland -- Poland's prime minister said Sunday that Russian President Vladimir Putin has been lying in remarks blaming Poland for the outbreak of World War II, and argued that Putin is doing it to deflect from recent Russian political failures.

Putin has said on several recent occasions that Poland bears responsibility for the outbreak of the war, deepening tensions between the two Slavic nations. On Friday, the Russian ambassador to Poland was summoned to the Polish Foreign Ministry in protest.

World War II began in 1939 when Poland was invaded first by Nazi Germany, then by the Soviet Union two weeks later. The dual occupation came days after the two totalitarian states signed a pact with a secret protocol to carve up Poland and the Baltic states. Some 6 million Polish citizens were killed in the war.

"President Putin has lied about Poland on numerous occasions, and he has always done it deliberately," Prime Minister Mateusz Morawiecki said in a statement. "It usually happens in a situation when the authorities in Moscow feel international pressure caused by its actions. And this pressure is not on the historical stage but on the modern geopolitical scene."

Morawiecki pointed to several recent developments that he described as failures for Russia, including Russian athletes being suspended for doping and a failed attempt by the Kremlin "to fully subordinate Belarus to Russia."

He also noted a recent extension of the European Union sanctions imposed after Moscow's annexation of Ukraine's Crimean Peninsula in 2014. In addition, Russia faces new sanctions from the United States over its planned Nord Stream 2 gas pipeline, which Poland and the Baltic states also oppose, fearing it will be used to apply political pressure.

"I consider the words of President Putin as an attempt to conceal these problems," Morawiecki said.

Putin has lashed out in recent days against a resolution adopted by the European Parliament that says the Soviet Union bears responsibility for World War II alongside Germany. The Russian leader has called that "sheer nonsense."

Putin argues that collusion with Adolf Hitler by Western powers paved the way for World War II. He has heaped scorn on Poland, citing archival documents that he asserted show the Polish ambassador to Berlin praising Hitler's plans to rid Europe of Jews.

In one outburst, Putin denounced the ambassador as "scum" and "anti-Semitic swine."

Some opponents of Poland's conservative government have accused the authorities in Warsaw of being too slow and passive in their response to Russia.

Donald Tusk, a former Polish prime minister who was until recently the president of the European Council, urged unity among Poles.

"In view of President Putin's brazen lies and Russian propaganda, a joint position of the Polish authorities and the opposition is needed. This is not the place and time for an internal dispute," Tusk said on Twitter.