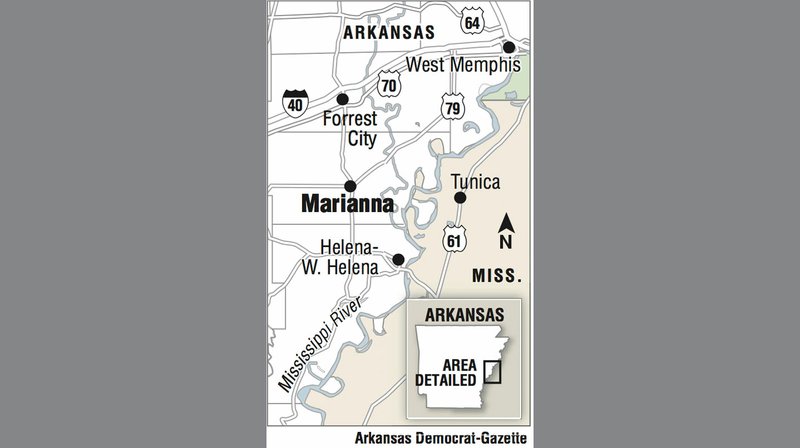 A map showing the location of Marianna.

An east Arkansas police chief under investigation by state authorities after a court filing alleged he never graduated from high school has resigned, according to documents obtained Tuesday.

Martin Wilson, who had worked for Marianna police since 2006, resigned on Dec. 13, according to a copy of his resignation letter.

“I feel this decision is in the best interest of my family, citizens of Marianna and the Marianna Police Department,” Wilson wrote in the letter. “I feel that this will allow the Department to continue with its goal to protect and serve the citizens of our city.”

Mayor Jimmy Williams said Daniel Strickland, who has served as interim chief since Wilson was placed on leave in October, will continue in the position until decisions are made in the new year.

“We have moved on as best we can,” Williams said.

Wilson’s leave and resignation come after a court filing in October that alleged he forged his high school diploma and never actually graduated.

Arkansas requires a person to possess either a high school diploma or General Education Development certificate to become a member of law enforcement.

State police spokesman Bill Sadler said an investigation into Wilson on an allegation of fraud is open and ongoing. He said the investigation was started at the request of the First Judicial Circuit prosecuting attorney.

Williams said he also asked the city attorney, Bill Lewellen, to look into the matter of Wilson’s educational background after the allegation surfaced.

“All of this was a shock to me,” Williams said.

The mayor said he did not know what Lewellen had found during his investigation, and deferred to the attorney for comment.

Reached Tuesday, Lewellen said he spoke to officials with the Helena-West Helena School District. He said they told him records from the time when Wilson would have attended had been destroyed, so they could neither confirm nor deny his graduation.

"They were saying 'we don't know,' so that was the end of that," Lewellen said.

Lewellen said he does not know whether the investigation will continue in the new year now that Wilson has resigned.

Lewellen said his work as city attorney is independent of the mayor and the chief.

“Our chief had his certification and that’s all that mattered to me,” Lewellen said. “During this time he’s been qualified to be a police officer — there was no question to him being certified.”

Records from the Arkansas Commission on Law Enforcement Standards and Training show Wilson obtained basic police training in 2003 and underwent additional training throughout his career.

The accusation Wilson forged his diploma came in an amended complaint filed Oct. 18 in the case Darry Chatwood and Charles Mitchell Jr. vs. Russ Hinsley, Alco Management and the City of Marianna.

Counsel for the plaintiffs requested the city prove that Wilson finished high school or received a GED.

The city provided a diploma that states Wilson graduated in 1989 from Central High School in Helena-West Helena. Wilson also told the Democrat-Gazette in October he did graduate and he had given the city a copy of his original high school diploma.

But the plaintiffs' attorney pointed to an affidavit from the Helena-West Helena School District as evidence it is forged.

According to the affidavit written by then-interim Superintendent Linda English, primary records from around the time Wilson says he was in school were stored in a building that was damaged by water.

The district was unable to find any academic records of Wilson or "the persons who would have graduated in 1989," the affidavit states, so the district turned to "secondary sources" to determine whether Wilson graduated from Central High School.

The affidavit states that Wilson's name was not on the graduation list nor on the list of student dropouts from 1989. His photo was not in the 1989 yearbook, nor was he listed as not pictured, the affidavit states.

The diploma he provided the city, according to the affidavit, shows different names for the principal, district superintendent and board secretary when compared with the yearbook. It is also different from another individual's verified diploma from 1989.

Wilson said in October he doesn't know for sure whether he ever sat for a yearbook photo his senior year but said he believes he did.

He also said he didn't know why he wouldn't be listed in the yearbook or why his diploma would be different from someone else's from his class.

A public records request by the Democrat-Gazette to the city of Marianna for documents related to Wilson's hiring turned up a transcript showing coursework at Central High School in Helena-West Helena between 1985 and 1989.

The transcript isn't clear as to whether Wilson graduated, but it shows various complete and incomplete courses and lists him as ranked 203rd out of 216 students with a 1.38 grade-point average.