Baghdad says it will review relationship with America by Compiled by Democrat-Gazette staff from wire reports | December 31, 2019 at 6:48 a.m. 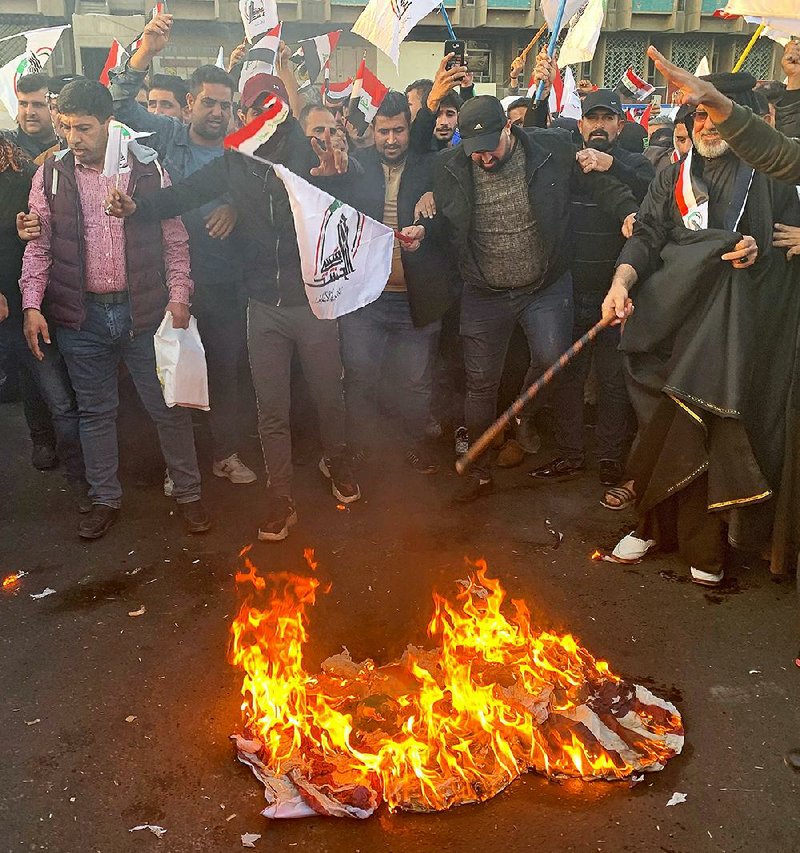 Protesters burn representations of an American flag Monday in Baghdad’s Tahrir Square during a protest against the U.S. strikes on the Kataeb Hezbollah militia. More photos at arkansasonline.com/1231strikes/.

BAGHDAD -- U.S. airstrikes against bases of an Iranian-backed militia in Iraq drew condemnation across the Iraqi political spectrum Monday, as well as threats of retaliation, raising the risk of an escalating spiral of attacks and questions over the continued viability of the U.S. military presence.

Iraq announced Monday after an emergency meeting of its National Security Council that it will review its relationship with the United States as a result of the strikes.

A spokesman for the Iraqi government said top officials had pleaded with the United States not to go ahead with Sunday night's airstrikes against the Kataeb Hezbollah militia, in which at least 25 militia members were killed and more than 50 injured.

Iran and its allies warned that the United States would face consequences for the strikes, which were carried out in response to a rocket attack blamed on Kataeb Hezbollah that killed an American contractor and injured four U.S. troops at a base in Kirkuk on Friday.

"The blood of the martyrs and the wounded will not go in vain, and the response will be harsh for the American forces in Iraq," said Jamal Jaafar Ibrahimi, deputy head of the Popular Mobilization Units, of which Kataeb Hezbollah is a part. He is a powerful ally of Iran who is better known by his nom de guerre, Abu Mahdi al-Mohandis.

"Our battle with America and its mercenaries is now open to all possibilities," Kataeb Hezbollah said in a statement around midnight Sunday. "We have no alternative today other than confrontation and there is nothing that will prevent us from responding to this crime."

[Video not showing up above? Click here to watch » https://www.youtube.com/watch?v=8ZP3RocEF8o]

Secretary of State Mike Pompeo said the strikes send the message that the U.S. will not tolerate actions by Iran that jeopardize American lives.

The two attacks sharply raised the stakes in the regionwide confrontation between Tehran and Washington that began earlier this year after the Trump administration launched its "maximum pressure" campaign of harsh economic sanctions against Iran.

The sanctions are intended to force Iran to reopen negotiations on a 2015 nuclear deal, but instead they have prompted Iran to embark on what it has described as a campaign of "maximum resistance." The campaign has embroiled international shipping in the Persian Gulf and, increasingly, U.S. troops in Iraq.

The contractor was the first American to die in a series of intensifying rocket attacks against facilities where U.S. troops are based -- strikes that increasingly seemed designed to inflict casualties. After an attack earlier in the month narrowly missed hitting Americans, the State Department warned that the U.S. military would respond if an American were killed.

The retaliatory strikes marked the first time that the United States has used military force against an Iran-linked target since U.S. combat troops withdrew in 2011. The U.S. military characterized the strikes as defensive in nature and said they were intended to deter further attacks against the 5,000 U.S. troops who were sent back to Iraq after 2014 to fight the Islamic State.

With both sides now having drawn blood, there is a risk that the troops will either be drawn into an escalating tit-for-tat exchange of fire with Iran's proxies in Iraq or face increased pressure from Baghdad to pull out of Iraq altogether, said Renad Mansour, director of the Iraq Initiative at the London-based Chatham House think tank.

Whereas both sides had seemed intent on avoiding escalation in the past, that no longer seems to be the case, he said. "Does this mean a new norm in U.S.-Iranian relations in Iraq, which is that they are both willing to destabilize a country they have spent many years trying to stabilize?" he asked.

Alternatively, he said, Iran and its allies are likely to step up pressure for the removal of U.S. troops from Iraq. Although there are still some Iraqis who want U.S. troops to remain in Iraq as a counterbalance to Iran, "it's going to become more difficult for Iraqis advocating an American presence to make their case," he said.

The Iranian Foreign Ministry said the attacks showed that the United States was a source of conflict and tension in Iraq and would have to pull its forces out. "America must put an end to its occupying presence," Iranian government spokesman Abbas Mousavi said.

Iraq's top Shiite cleric called on the Iraqi government to step in and prevent the country from turning into "an arena for settling accounts" between regional and international powers.

In a statement, Grand Ayatollah Ali al-Sistani condemned the "atrocious aggression" by the U.S. and called for the respect of Iraq's sovereignty and to abstain from violating it "under the pretext of responding to some illegal practices by some sides."

Al-Sistani, however, added that "only Iraqi authorities are entitled to deal with these practices and take necessary measures to prevent them."

The cleric's comments appeared to be a warning against any retaliation by Iran-backed paramilitary groups which would further inflame the situation in the country. Iraq has been roiled by three months of mass protests against the ruling elite as well as the influence of Iran-backed militias in the country's politics.

Iraq's political leaders, who have sought to balance alliances simultaneously with both Iran and the United States, also condemned the strikes.

"We have previously confirmed our rejection of any unilateral action by the coalition forces or any other forces inside Iraq, and we consider it as a violation of Iraqi sovereignty and a dangerous escalation that threatens the security of Iraq and the region," the spokesman quoted Abdul Mahdi as telling Esper.

At the same time, Iraqi President Barham Salih expressed his opposition to the strikes in a telephone call with the U.S. Embassy, calling them "harmful to Iraq and ... unacceptable," the news agency said.

Other major political blocs also issued statements condemning the strikes, underlining the extent to which the United States in Iraq has lost influence to Iran in recent years, said Mansour. There were no statements of condemnation after the rocket attack in Kirkuk.

"All of Iraq's institutional leaders are condemning America," he said. "The issue is that America doesn't have any allies."

Information for this article was contributed by Mustafa Salim and Liz Sly of The Washington Post; and by Qassim Abdul-Zahra, Nasser Karimi and Bassem Mroue of The Associated Press. 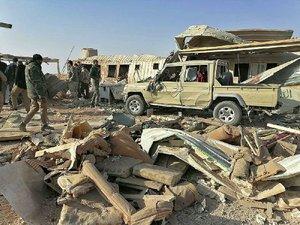 Photo by AP
Fighters from the Kataeb Hezbollah militia inspect the rubble of their Iraq headquarters Monday in the aftermath of a U.S. airstrike.