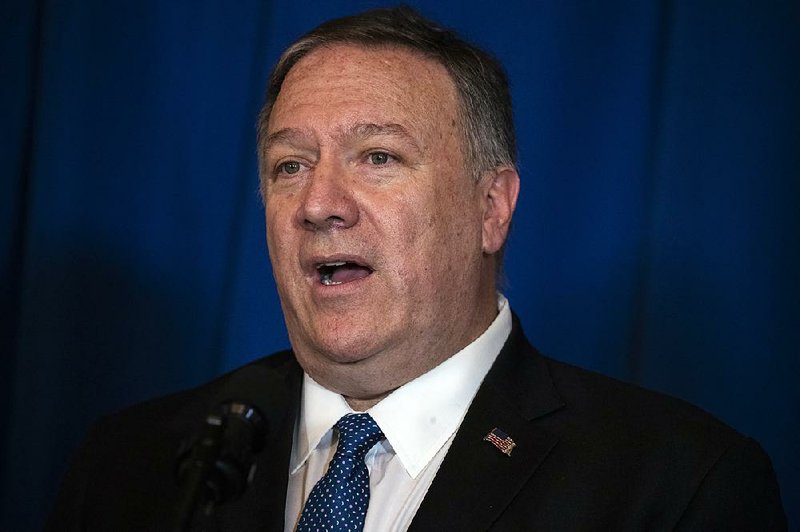 WASHINGTON -- Secretary of State Mike Pompeo will visit Ukraine this week, making his first trip to the country at the heart of President Donald Trump's impeachment.

As the Senate weighs options for a trial, Pompeo will depart Thursday on a five-nation tour of Europe and Central Asia. Ukraine will be the first stop on the trip, the State Department said Monday.

Trump's impeachment on charges of abuse of office and obstruction of Congress hinges on his policy toward Ukraine. Witnesses told House investigators that Trump wanted Ukraine to announce an investigation into former Vice President Joe Biden's son in return for releasing critical military aid to Ukraine.

One of those witnesses, William Taylor, is the current acting U.S. ambassador to Ukraine although he will leave Kyiv shortly before Pompeo's arrival. Pompeo appointed Taylor to the post over the summer to take over from Marie Yovanovitch, whose tour was abruptly cut short in May.

Taylor's position was temporary and time-limited by law but his tenure could have lasted until mid-January, prompting complaints from lawmakers that his departure is similar to Yovanovitch's early recall and sends a poor message to the embassy in Kyiv and career diplomats more generally, as well as Ukraine.

A senior State Department official did not answer questions about Taylor's status in a conference call with reporters Monday. The official gave details about the trip on condition of anonymity under State Department rules for such briefings.

In Kyiv, Pompeo will meet with Ukraine's President Volodymyr Zelenskiy, whose July 25 phone call with Trump triggered a whistleblower complaint that led to Trump's impeachment. In that call, Trump disparaged Yovanovitch and asked Zelenskiy for "a favor," suggesting he wanted Ukrainian authorities to investigate Biden's son, Hunter Biden, for corruption. Trump has denied doing anything wrong.

In his meetings, Pompeo will "reaffirm U.S. support for Ukraine's sovereignty and territorial integrity" as the country continues to battle Russia-backed separatists in the east, the State Department said. Pompeo also will honor Ukrainians who have died in the conflict, which intensified after Russia annexed Ukraine's Crimea Peninsula in 2014, a move condemned and rejected by most of the international community. The senior official said Pompeo would underscore that the U.S. will never recognize Russia's annexation of Crimea.

The official said Pompeo would discuss Zelenskiy's anti-corruption efforts but would not comment on whether the secretary would raise Trump's desire for an investigation into Hunter Biden and his role on the board of a Ukrainian energy company or claims that Ukraine interfered in the 2016 U.S. presidential election.

In addition, Pompeo plans to meet Ukrainian religious, civic and business leaders for talks on human rights, investment and economic and political change, the department said.

From Ukraine, Pompeo will travel on to Belarus, Kazakhstan, Uzbekistan and Cyprus before returning home. Human rights, energy independence and economic changes will top Pompeo's agenda at each of those stops, the department said.