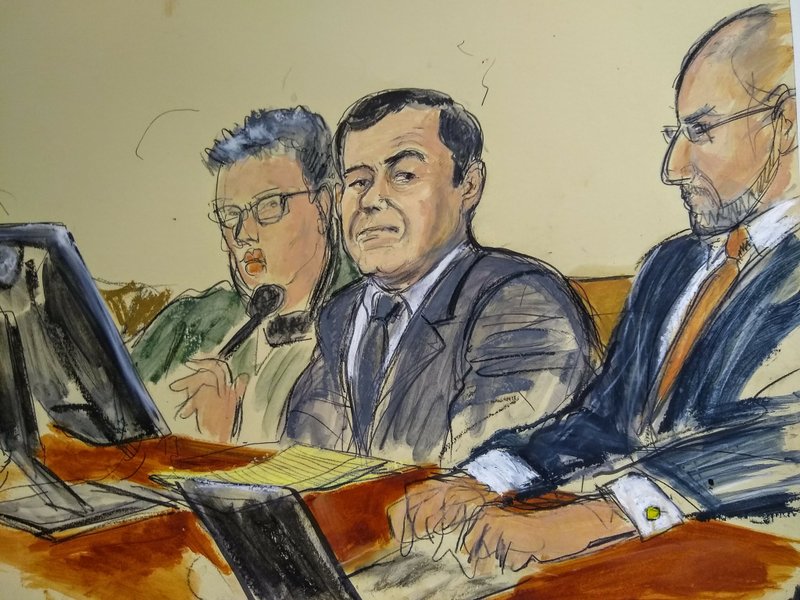 In this courtroom sketch, Joaquin "El Chapo" Guzman, center, listens as a prosecutor delivers closing arguments during his trial, Wednesday, Jan. 30, 2019, in New York. Guzman was portrayed Wednesday in closing arguments at his U.S. trial as a ruthless Mexican drug lord who also became skilled at evading capture and escaping prison because he feared facing justice on American soil. (Elizabeth Williams via AP)

NEW YORK -- A defense attorney for Joaquin "El Chapo" Guzman assailed the federal case against him as "a fantasy," telling a U.S. jury Thursday that the prosecution relied on a parade of cooperating witnesses who "lie, steal, cheat, deal drugs and kill people" for a living.

In a closing argument, defense attorney Jeffrey Lichtman said prosecutors failed to address a "600-pound gorilla" of reasonable doubt in their bid to convict the man they've called one of the world's most notorious drug traffickers. He dismissed the testimony of government witnesses as "repulsive, dishonest garbage" and called into question the motives of the U.S. Justice Department, which he accused of disregarding another man the defense calls the actual cartel leader.

The prosecution, Lichtman added, orchestrated a "scripted event" over the past three months in federal court in Brooklyn based on the shifting accounts of degenerate drug dealers seeking leniency in their own cases.

"A house that's built on a rotten foundation won't stand for long," Lichtman said. "We have to trust the word of these lunatics?"

Prosecutors have described the evidence against Guzman as overwhelming. Assistant U.S. Attorney Amanda Liskamm, in a rebuttal argument, said it's "inescapable" that Guzman directed a murderous drug syndicate, even calling the shots from behind bars at times.

To believe Guzman is innocent, Liskamm said, is to believe he is the "unluckiest man in the world" -- the victim of an implausible conspiracy involving both the FBI and career narcotraffickers.

"All these people came together to frame the defendant," she said sarcastically.

Guzman faces drug and murder conspiracy charges and could spend the rest of his life in a U.S. prison if convicted.

The jury is expected to begin deliberating Monday.

Lichtman scoffed at the notion that Guzman amassed a multimillion-dollar wealth over the course of three decades, referring to his client as a man of "plastic chairs and wooden planks for night stands." He said the government had failed to produce evidence of ill-gotten gains beyond the word of the cooperating witnesses.

Lichtman singled out an allegation by a cooperator that Guzman had paid a $100 million bribe to a Mexican president to call off a manhunt. He argued that made no sense since authorities still arrested his client and sent him to the United States in 2017 to face drug-trafficking charges.

Guzman "pays the bribe and gets hunted down like an animal," he said. "Is that logical?"

The lawyer said it would make more sense that the bribe was paid by Ismael "El Mayo" Zambada, since he's never been arrested. The defense has sought to portray Zambada as the true leader of the cartel.

The bribe allegation was made by Alex Cifuentes, a Colombian trafficker who said on cross-examination that he had a history of lying to everyone around him, except when it came to his testimony about Guzman, Lichtman said.

Referring to another cooperating witness, Cifuentes' brother, Lichtman asked jurors whether they would be comfortable buying a used car "from a Cifuentes" or entrusting their child to be babysat by one of the brothers.

The car would break down before it left the lot, Lichtman argued, while "the kid would be sold for a kilo of cocaine."

Information for this article was contributed by Tom Hays of The Associated Press.