How trout came to Arkansas 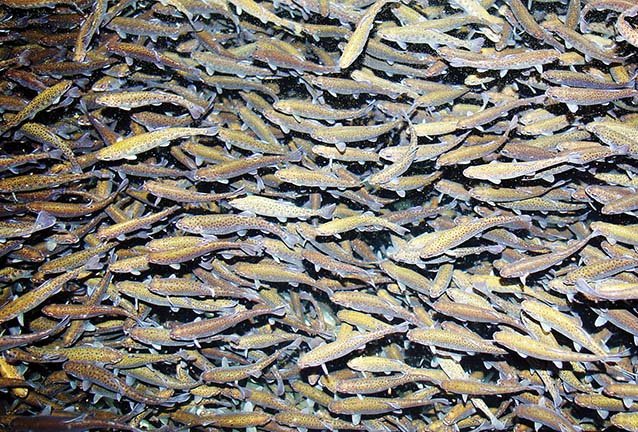 If you had a time machine and could travel back to the early 1940s in Arkansas, you would discover at least one thing very different about the clear gravel-bottomed rivers of the Ozark and Ouachita mountains. They had no trout. None. Zero. Nada.

That may seem odd considering the fact that today, some of those same rivers — the White, the Little Red, the Spring and others — are considered among the world’s top trout-fishing destinations. Gone are the smallmouth bass and other cool-water denizens native to those flowing waters, and in their place are millions of rainbow, brown, brook and cutthroat trout stocked to mitigate the loss of native fishes that couldn’t survive in the cold tailwaters below newly built

Fisheries biologists and administrators at the Arkansas Game and Fish Commission and the U.S. Fish and Wildlife Service knew that trout were ideal for stocking the frigid waters below each dam. And while the loss of some fine smallmouth fisheries was the inevitable result of the dam-building, the agencies implemented stocking and management programs that created places where anglers could catch trout to their hearts’ content, including some true monsters.

This story began in the 1930s when Congress authorized the U.S. Army Corps of Engineers to build dams in the White River basin for flood control and power. The first two—Norfork Dam on the North Fork River and Bull Shoals Dam on the White River—were completed in 1944 and 1951.

These dams changed the character of the rivers. Bill Mathis, former chief of the AGFC’s Fisheries Division, wrote in 1970, “The most immediate change was noted when the cold water from both Bull Shoals and Norfork dams completely eliminated the warm-water fishery as far downstream as Lock and Dam No. 3 near Mountain View.”

The impact on the warm-

water fisheries was devastating. But lemons can be made into lemonade, and out of the devastation rose a new commerce: Arkansas trout fishing.

In 1951, the AGFC decided to take advantage of the cold-water influxes into the White and North Fork, and cooperating with federal officials, the commission began stocking rainbow trout in the cool, oxygen-rich tailwaters. A total of 39,216 trout were placed in the streams in 1951. Smaller numbers followed in 1952, ’53 and ’54. In 1956, 72,113 trout were released for the opening of trout season.

The U.S. Fish and Wildlife Service received a $665,600 appropriation in 1956 with which to raise and release 6 million catchable-size trout. About $455,000 of the funds were earmarked to build the Norfork National Fish Hatchery, a trout culture facility completed in 1957.

Rainbow trout from the Norfork hatchery thrived in the cold, food-rich environments and grew at such a phenomenal rate that soon the White and North Fork were being touted as the country’s finest trophy-trout fisheries.

In 1956, newspaper columnist Bill Apple wrote, “With 3 to 4 million trout being placed in the White and North Fork rivers each year, one only has to close his eyes to picture the fine trout fishing to be enjoyed on the two beautiful rivers.”

In another column, Apple asserted, “The frigid waters pouring from the foot of these structures have created more than 100 miles of river, perfect for trout. It’s the only extensive stretch of trout water in the South and one which saves fishermen of Texas, Louisiana, Oklahoma, Mississippi and Tennessee from 500 to 1,000 miles of driving into the Rockies.”

With the damming and subsequent creation of trout tailwaters on the Little Red, upper White and Little Missouri rivers, as well as the realization that the cold, spring-fed waters of the Spring River could also support trout, the put-and-take rainbow-

Phenomenal growth rates occurred in the food-rich tailwaters, and anglers expected to catch at least one 5- to 7-pound rainbow on every outing. Few went away disappointed. In 1981, Jim Miller of Memphis, Tennessee, landed a 19-pound, 1-ounce White River rainbow, the current state record.

Catch rates for Arkansas rainbows continue to be some of the highest in the country, but those 5- to 7-pounders are rare as a result of increased angling pressure.

Fortunately, as the lunker rainbow-trout fishery succumbed to increased fishing pressure, a sleeping giant awoke to provide a different type of trophy fishing. The AGFC dabbled briefly with brown-trout stockings early in the trout program but put them on hold during the 1960s and ’70s.

During these years, big browns were still occasionally caught. One of the heaviest — a 31 1/2-pounder pulled from the White River in 1972 — established a North American record that went unbroken for close to five years. The fish that finally beat it, caught in 1977, was another White River monster with 2 more pounds of bulk.

During this same period, small brown trout were showing up on stringers, browns too small to be holdover fish from the original stockings. With no advanced planning and little fanfare, Arkansas had developed a reproducing, wild population of browns.

The AGFC re-entered the brown-trout stocking business in the 1980s, seed-stocking areas with browns and allowing them to reproduce naturally. Today, natural reproduction is increasing. All brown trout in the Little Red River are of wild origin, and in the Beaver, Bull Shoals and Norfork tailwaters on the White River, significant brown-trout reproduction occurs. (Natural reproduction of rainbow trout also occurs but provides less than 1 percent of the annual trout population.)

Arkansas tailwaters now hold significant numbers of 20-pound-plus browns, and 5- to 10- pound fish are common. The current state-record brown trout, which was formerly the all-tackle world record at 40 pounds, 4 ounces, was caught in the Little Red River in May 1992.

The White and North Fork rivers received the state’s first stockings of cutthroat trout in 1983. Regular annual stocking began in the early 1990s. Cutthroats are popular sport fish in the western U.S., and this introduction has proven extremely successful. Cutthroats in the 2- to 3- pound range are now common, with some fish in the 5-pound class. The current state record is 9 pounds, 9 ounces.

Biologists believe brook trout will provide another excellent angling opportunity. Some brook trout escaped from the Norfork hatchery in the 1980s, and the fish adapted well. The AGFC began stocking brook trout in the Spring River and the Beaver, Norfork and Greers Ferry tailwaters in 1995. In their native ranges, brookies seldom exceed

12 inches or 1 pound, but studies show that fish stocked in the North Fork River may reach 19 inches and 3 pounds in just two years.

Trout fishing now contributes millions of dollars to the Arkansas economy. It’s been a boon to tourism, with almost half the people who trout-fish coming from out of state.

For the many thousands of anglers who love trout fishing, The Natural State will always be near the top of the list of places that must be visited.