A different but delicious kind of cake 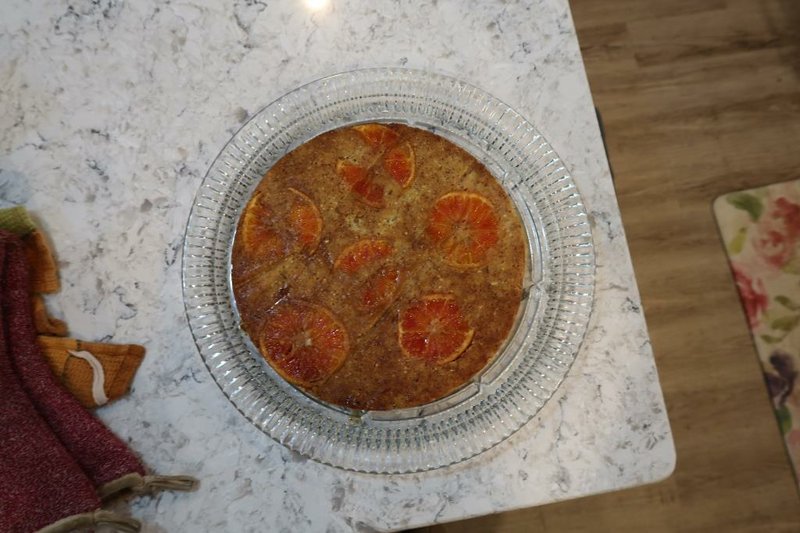 I am a fairly decent cook, but baking, particularly desserts is not my strong suit. I was intrigued when I saw this cake online. I subscribe to a weekly cooking blog called Smitten Kitchen by Deb Perelman. Every Monday morning I get a blog post with current recipes, but then she highlights some older ones. I saw this blood orange, almond and ricotta cake from 2016 and decided to try it. I figured with the ingredients I saw it would not be overly sweet, and I was correct. 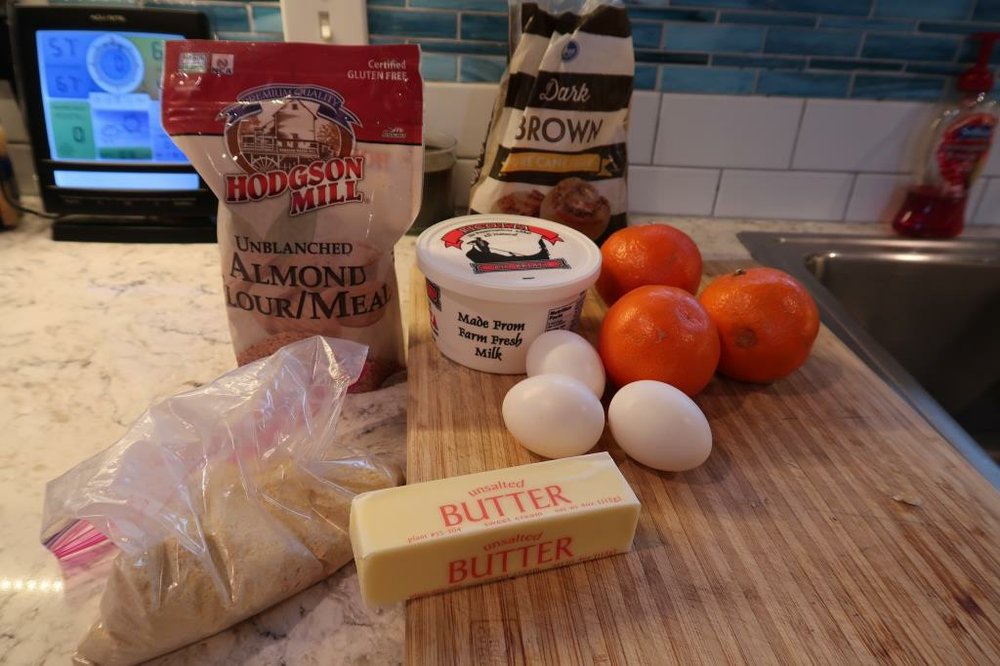 One of my problems with baking is you really do need to measure ingredients. When I cook savory things, I just put in a pinch of this and a shake of that and taste as I go. You can't do that and have great success with baking, which I have learned the hard way. So I did measure and I did follow the directions, and it turned out quite nicely. Here is the recipe.

2 blood oranges, or another orange of your choice--the blood oranges I found were not too pretty so I got Ruby Tango's which are a cross between a blood orange and a clementine supposedly. Not as deep a red color, but still darker than a normal orange.

1/4 cup apple or apricot jam (optional, for glossy finish--and I did not do this)

Heat oven to 300 degrees F. Butter a 9-inch round cake pan and line the bottom with a round of parchment paper.

Stir brown sugar and water together so they form a thick slurry. Pour into prepared cake pan and spread thin--mine kept moving around but I re-spread it before I added the orange slices. Set aside. 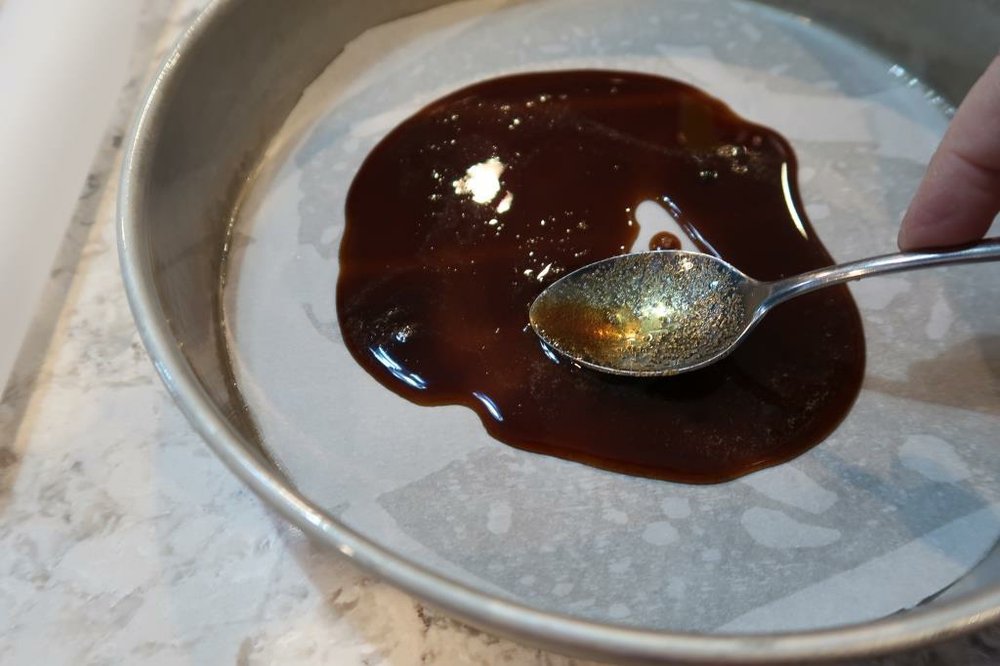 Separate the whites from the yolks. 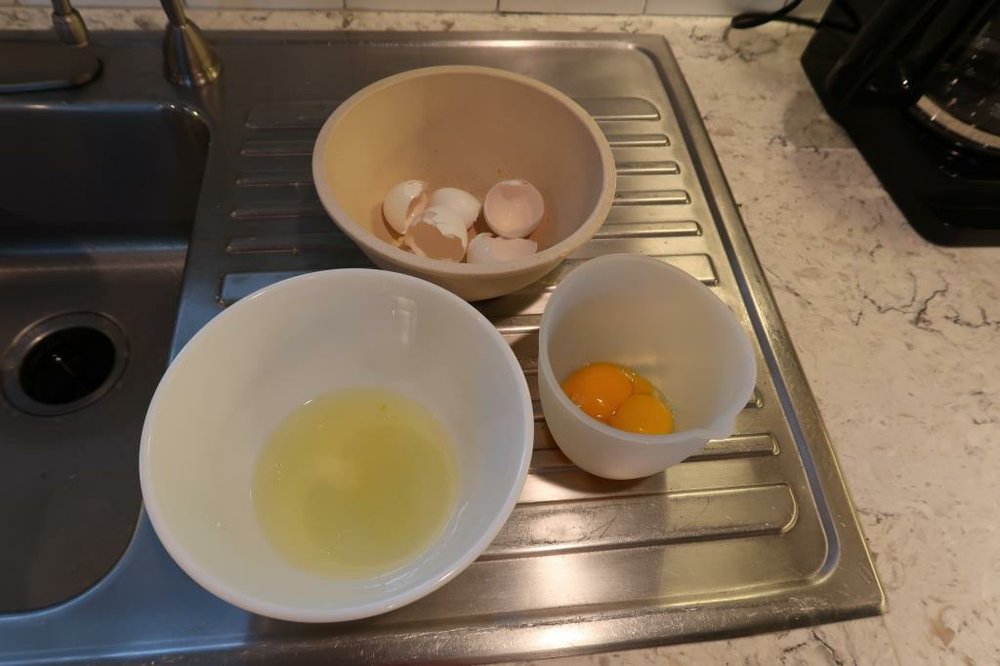 Whip egg whites in a medium bowl with an electric mixer until they hold thick peaks. Set aside. 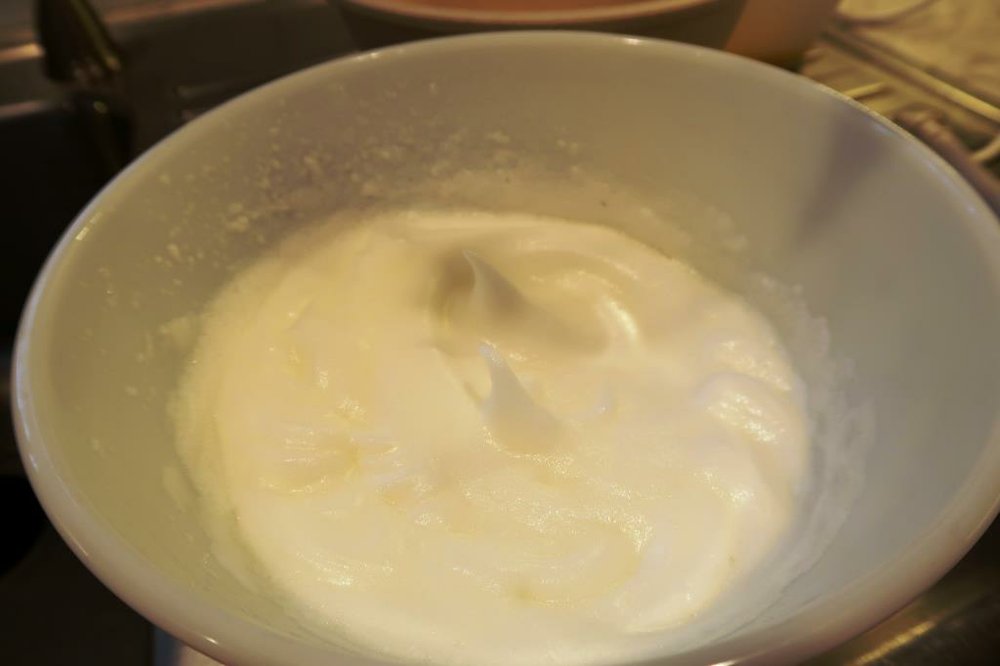 Place granulated sugar in a large mixing bowl. Finely zest both oranges over it. (If you don't own a microplane, I suggest getting one. They work great and they are made right here in Arkansas) 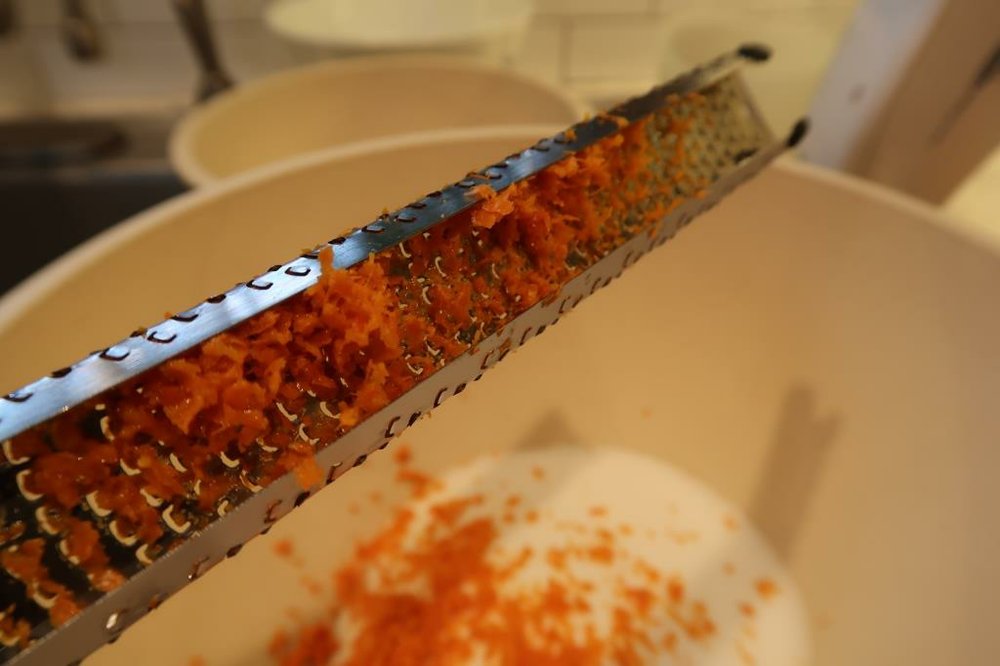 Cut both oranges in half. Cut one of the halves into paper-thin slices and arrange slices over brown sugar base in cake pan. (I had a tough time cutting the orange slices really thin. I would not cut them in half first. I think a whole orange would be easier to slice than a half, but in the end they tasted great and looked ok) Juice other three halves (I had about 1/3 cup juice) and set juice aside. 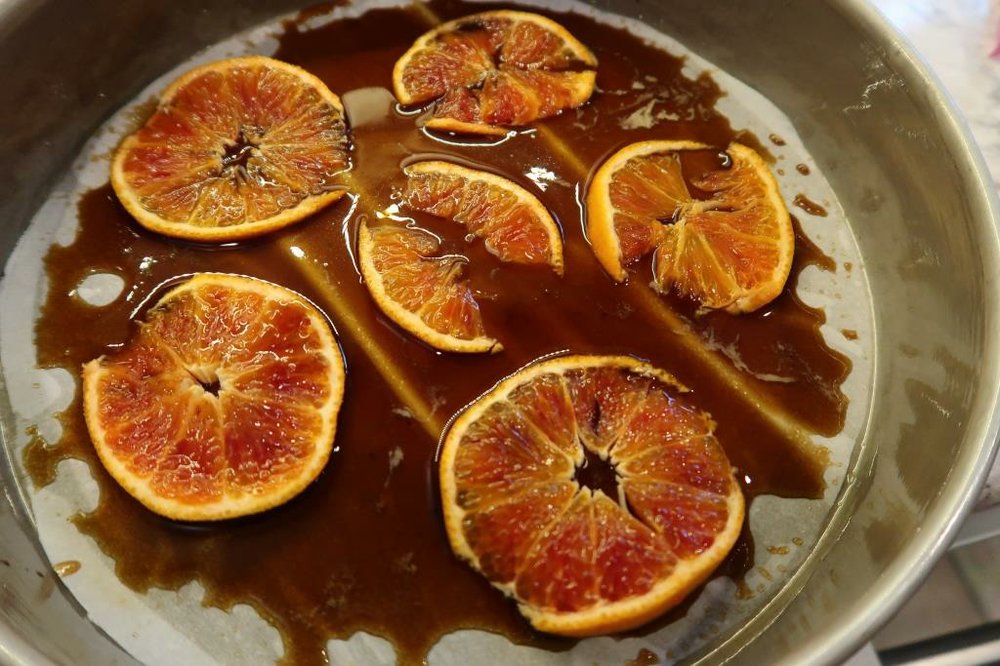 Add butter to zest and white sugar in large mixing bowl and beat with an electric mixer until light and fluffy.

Add egg yolks, one at a time, and beat to combine. Add juice and ricotta; mix until smooth. 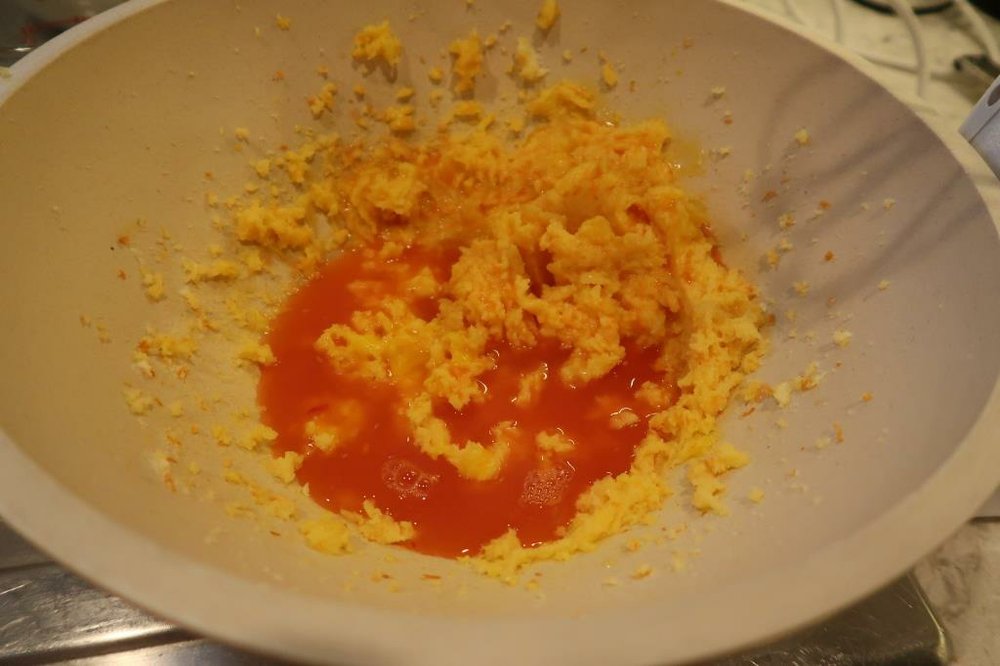 Sprinkle salt over batter, then add almond flour and cornmeal and mix until just combined. Gently fold in egg whites. 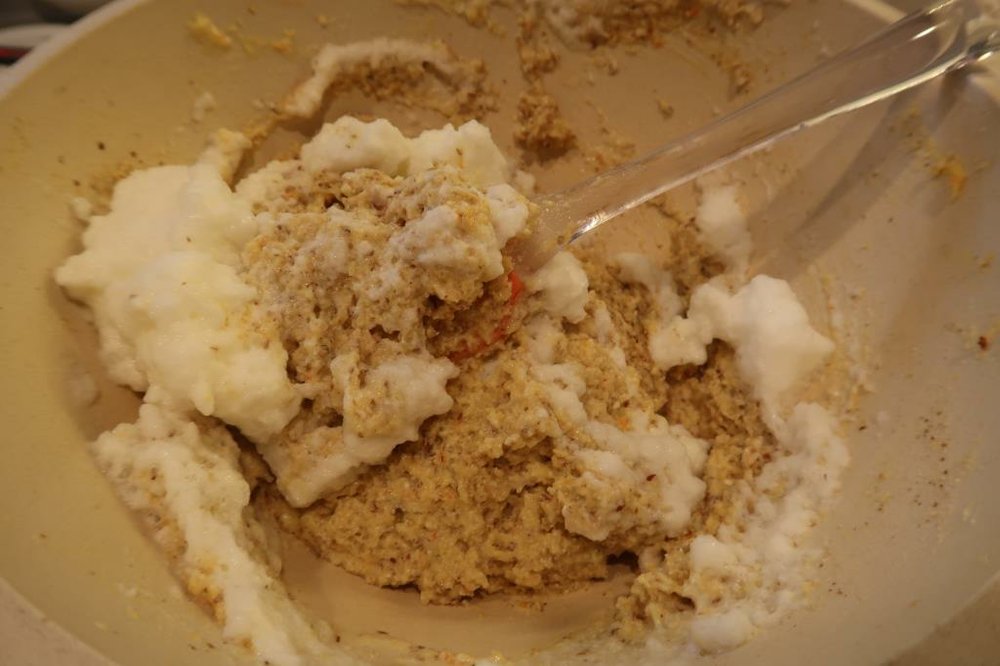 ( I had never used almond flour before, and it looks like finely grated almonds --which it is. I had read that it was blanched almonds with no skins, but mine definitely had skins on it. It was not white but brown in color. Clay had bought it for some other recipe, so we had it in the pantry. ) 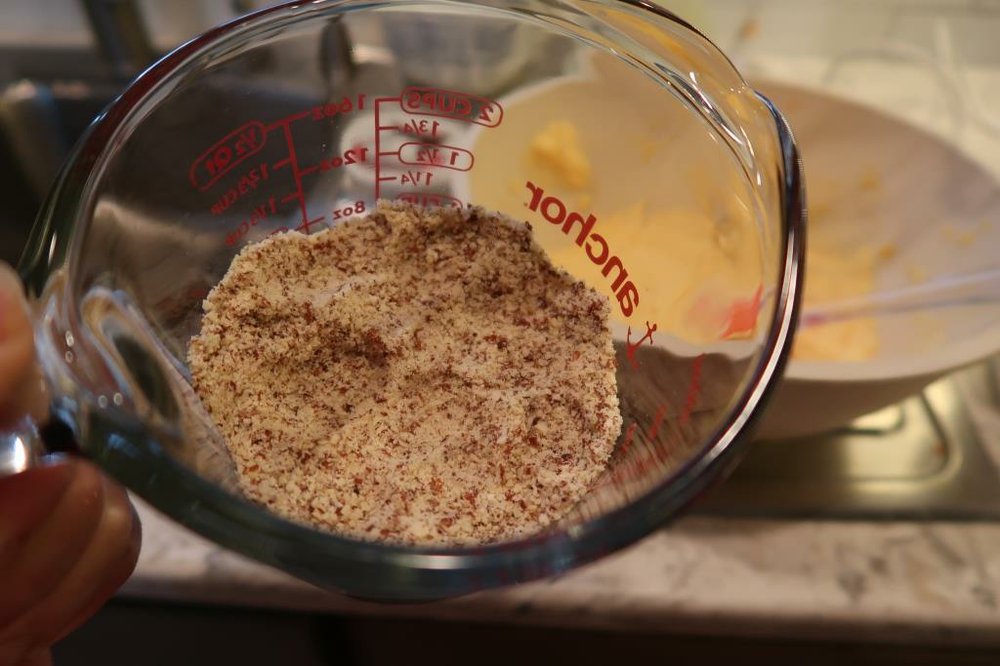 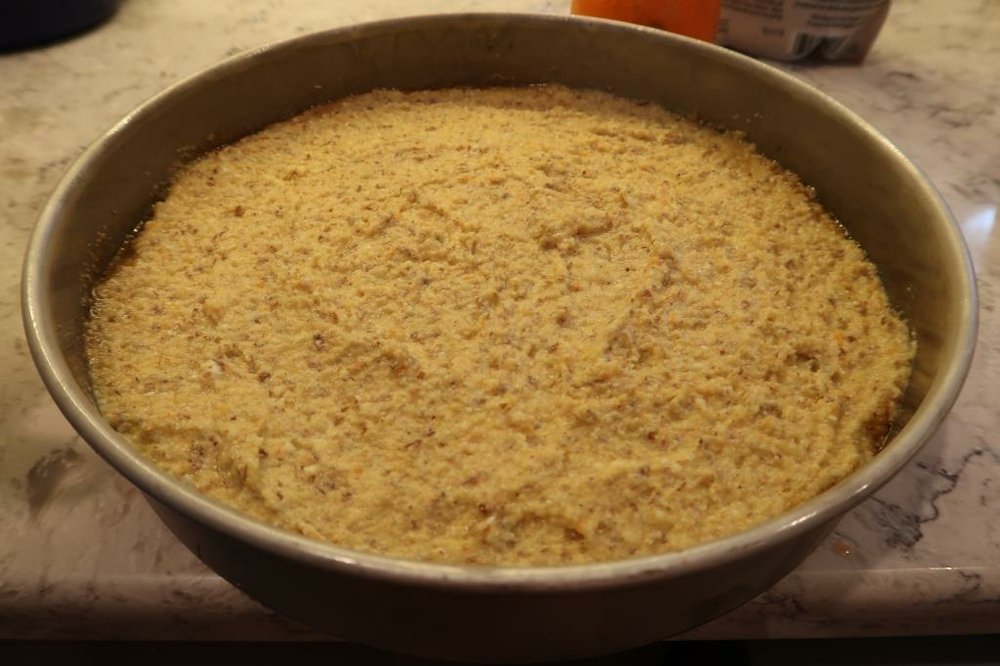 Bake in a 300 degree oven for 35 to 40 minutes or until a toothpick inserted into the center comes out clean and then for 5 more minutes. The final cake is pretty moist and a different texture than most cakes. 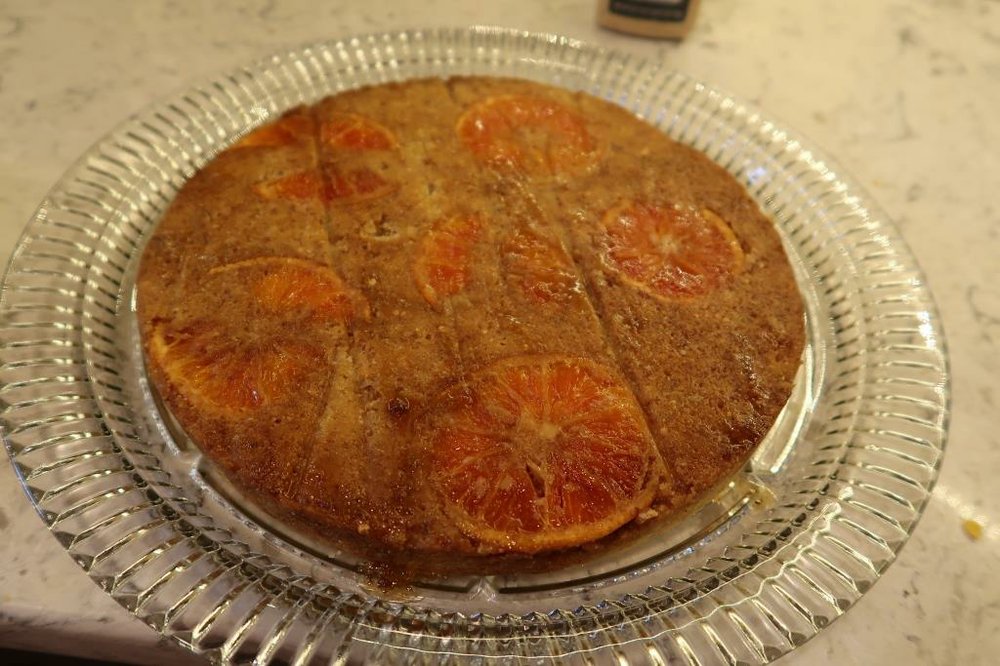 Cool cake in pan on rack for 5 minutes, and then run a knife around the side and invert onto a cake plate. If desired, heat jam until loose and brush over cake top for a glossier finish (which I did not do). Let cool and cut into slices. I served it with a dollop of fresh unsweetened whipped cream.

We had it for a dinner party Saturday night and I served the rest at book club today. It was a hit with everyone. My husband loved it, which is high praise indeed when it comes to sweets that I make! I will definitely make this cake again. If you are into cooking, I would suggest you visit Smitten Kitchen--she has loads of great looking recipes. Happy Cooking!