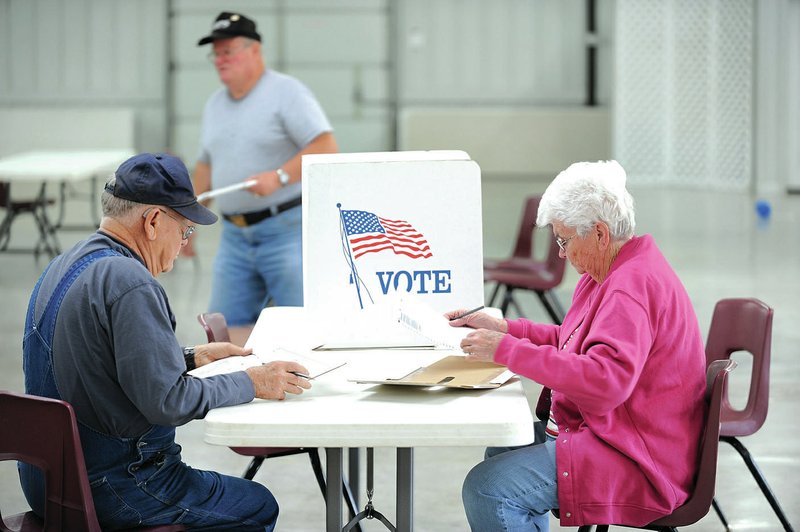 FAYETTEVILLE -- Election officials are concerned with the aging of the poll workers they rely on to run elections and are looking for ways to recruit younger workers.

The commission was aware of the age of most poll workers generally, from observation over time, but hadn't seen the numbers until Price sent the report to them.

"When you see it in print, it really jumps out at you," Price said.

Renee Oelschlaeger, commission chairman, said younger people tend to be more mobile and haven't developed the habit of community service found among older generations. The pressures of working are generally less for older people, she said.

The drawback of relying on older workers, both Price and Oelschlaeger said, is the loss of workers through death and illness.

"Each election cycle we do experience some loss because people have died or become incapacitated or unable to work," Oelschlaeger said. "It is a concern for us."

Benton County Clerk Betsy Harrell said the county has been aware of the need to find younger poll workers and is working on ways to do that. She said Dennison is working on plans to reach out to companies encouraging employees to do community volunteer work to see whether they can provide a source of election workers. Price is developing a similar outreach program in Washington County.

Both counties have tried to recruit college students, with mixed results.

Pulaski County's Election Commission has similar problems, and Shawn Camp, assistant director of elections, said efforts to recruit student volunteers have been unsuccessful. Pulaski County had about 110 polling places for the 2018 general election and used about 900 poll workers.

Camp has also noted a generational difference in the poll workers the county has relied on, with the group that came of age during the Great Depression and World War II providing the most workers.

"We kind of look at it generationally," he said. "The Greatest Generation had a strong commitment to voting and elections. With millennials, we're not seeing it. We've tried outreach programs with local colleges and some of the 'younger' civic groups, and we've had just terrible results. We worked with four colleges in Pulaski County, this was about four years ago. We got about 50 people who said they were interested in being poll workers. Of those 50, we got about 30 to 35 trained and 15 of those were appointed to work elections. Out of those 15, six or eight didn't even show up, and those that did work never showed up again."

Camp said as members of the post-World War II baby boomers generation retire in larger numbers he's optimistic they will fill the ranks of poll workers.

"Once people retire and have more time to do things, they tend to become poll workers in greater numbers," he said. "We are seeing that with the baby boomers. Not as much as the Greatest Generation but more than before."