12 superb movies you can see by streaming 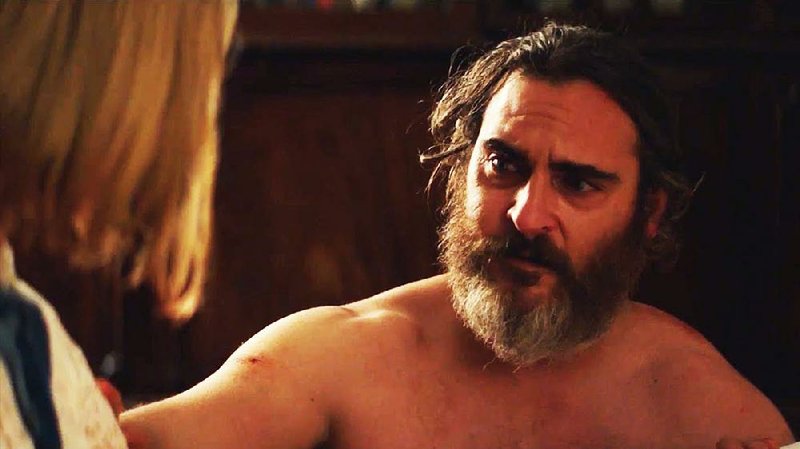 Joaquin Phoenix stars in You Were Never Really Here, Lynne Ramsay’s disturb- ing thriller about a contract killer hunting someone who is exploiting young girls. It is now streaming on Amazon Prime.

If you're a cinema snob who believes film can be fully appreciated only on a big screen, here's some advice: Get over it.

Roma, which received 10 Oscar nominations, including best picture, showed in just a handful of U.S. theaters before premiering on Netflix. So did The Ballad of Buster Scruggs, which earned the Coen brothers yet another nod for best screenplay.

In addition, a record number of high-caliber movies in 2018 were screened only in New York and Los Angeles, just to qualify for major awards, with distributors focusing instead on the audience for streaming services.

You should see Roma on the big screen to appreciate its vast scale and stunning black-and-white images. Some scenes have the grandeur of a classic John Ford western. It's also easier to fall under the spell of Alfonso Cuaron's autobiographical story -- centering on a maid who helps to raise a splintered family in 1970s Mexico City -- in a theater where that bag of Doritos in the cupboard isn't calling your name.

But for most viewers, the only opportunity to see what all the fuss is about is through Netflix, where they can appreciate Cuaron's insistence that the tiny details of everyday lives are something to attend to and celebrate.

If Roma ends up as the academy's best picture on Feb. 24, it will dramatically elevate the status of streaming services. But for now, they still have a stigma.

You Were Never Really Here: Joaquin Phoenix gave the most monumental movie performance of the year in Lynne Ramsay's disturbing thriller about a contract killer on the trail of someone who is exploiting young girls. His skill is matched by Ramsay, whose movies (We Need to Talk About Kevin, Ratcatcher) use stylish, spare visuals to help us understand horrifying behavior. Amazon Prime

Dumplin': This lighthearted comedy rallies around an overweight teenager (Danielle Macdonald) who's saddled with being the child of a looks-obsessed former beauty pageant queen (Jennifer Aniston). But this is ultimately a celebration of Dolly Parton, who contributed six new songs to the soundtrack plus several re-imagined classics, including "Jolene." Too bad her "Girl in the Movies" song failed to get an Oscar nom. It was tailor-made to open the ceremony. Netflix

Private Life: Eleven years elapsed between Tamara Jenkins' previous feature, The Savages, and this comedy/drama. She seems to have poured all of her life in those intervening years into the wry, autobiographical script. Kathryn Hahn and Paul Giamatti play a couple whose infertility leads them on an increasingly desperate path, one that Jenkins and husband Jim Taylor also stumbled down. It's clear Jenkins knows how damaging the struggle to have a baby can be -- but, as in The Savages, she balances the pain with compassion and humor. Netflix

The Ballad of Buster Scruggs: This wacky western anthology did get Oscar love, but it's a shame the academy couldn't find room for Tom Waits, playing history's most optimistic prospector, or Zoe Kazan, breaking hearts as an utterly lost pioneer whose one shot at happiness blows away like dust in the wind. Netflix

Outlaw King: This unofficial sequel to Braveheart was so badly received at the Toronto International Film Festival in September that director David Mackenzie scurried back to the editing room. His final, abbreviated result may not be as rousing as Mel Gibson's best picture winner, but Chris Pine shows off his charisma (and private parts) as the resilient Robert the Bruce, who helped Scotland finally win its freedom. If there was an Oscar category for tracking shots, the 9-minute opening would be a shoo-in. Netflix

Support the Girls: Regina Hall has been the best thing in a lot of bad or barely remembered movies, including the indifferent remakes of Death at a Funeral and Vacation, and the scariest (and not in a good way) film in the Scary Movie franchise. Here, she's the best thing in a terrific comedy. It's an inspiring tale from indie maestro Andrew Bujalski (Funny Ha Ha) about the manager of a degrading Hooters-style restaurant who makes sure that, against all odds, her employees' humanity is respected. Hulu

Shirkers: As a teenager in Singapore, Sandi Tan thought she'd be the next Steven Spielberg. Turns out, she was just the next sucker. Her painfully personal documentary starts off as an investigation into how a con man tricked her and her classmates into thinking that they were making a breakthrough feature film, but Tan puts herself on trial as her ex-partners call her out as a mini-monster. It's a perfect companion piece to Hulu's Minding the Gap, Bing Liu's collection of home movies from his childhood in Rockford, Ill., which did make the Oscars cut for best doc. Netflix

Hold the Dark: In a superb string of violent morality tales that started with Blue Ruin in 2013, escalated with the 2015 Patrick Stewart-led Green Room and hit a queasy peak with Hold the Dark, Jeremy Saulnier has established himself as a filmmaker of taste and skill. Based on a thriller by William Giraldo, it stars a quietly authoritative Jeffrey Wright (Westworld) as a sort of bounty hunter called to a creepy Alaskan town to find a wolf that has made off with a small boy. There's a lot more happening than wayward wildlife in this suspenseful drama, which also stars Alexander Skarsgard. The film's claustrophobia will be even more claustrophobic on your monitor at home. Netflix

To All the Boys I've Loved Before: John Hughes was never a regular on the awards circuit, but his coming-of-age films from the '80s have stood the test of time. Susan Johnson's rom-com about a boy-wary teen (Lana Condor) forced to confront her crushes is just as endearing, and funny, as Sixteen Candles and The Breakfast Club, but with a diverse cast -- something the late filmmaker never bothered to assemble. Netflix

22 July: Jason Bourne movies notwithstanding, writer/director Paul Greengrass specializes in pitiless examinations of shocking, real-life events: Captain Phillips, United 93, Bloody Sunday and now 22 July, about the man who opened fire on Norwegian schoolchildren at an island retreat in 2011. The movie is divided into three segments -- the crime, the fallout and the court case. While the first part is extremely difficult to watch, the rest of the movie chillingly makes the case that we must put these increasingly common events under a microscope if we have any hope of understanding and preventing them. Netflix

The Kindergarten Teacher: Maggie Gyllenhaal is one gutsy performer -- maybe too gutsy. Her risky choices have paid off with only one Oscar nomination, and that was for playing second fiddle to Jeff Bridges in 2009's Crazy Heart. She's much more in left field, her favorite position, in this twisted drama about an instructor/would-be poet who becomes a little too obsessed with a child prodigy. Netflix

The Land of Steady Habits: Nicole Holofcener actually was nominated for an Oscar last week, but for her other 2018 movie, Can You Ever Forgive Me?, as co-writer. She's the writer/director of this drama, which is bleaker than 2006's Friends With Money and 2013's Enough Said, the comedies for which she's best known. Ben Mendelsohn, one of the most underrated actors in the business, stars as a husband and father whose dissatisfaction with those roles leads him to pivot in a dangerous new direction. Edie Falco and Connie Britton costar. Netflix

Print Headline: 12 superb movies you can see by streaming