The Arkansas Medical Marijuana Commission on Tuesday released a list of the state's first 32 cannabis dispensaries, revealing where patients will be able to purchase marijuana products in the coming months.

The commission decided to spread the retail outlets across eight regions in the state with four dispensaries per zone, but patient advocates said Tuesday that the dispensaries aren't evenly distributed around the state.

Only one dispensary will be in Little Rock -- the state's largest city -- and a large portion of northeast Arkansas, including Jonesboro, won't have a dispensary nearby.

Melissa Fults, director of the Drug Policy Education Group, said many patients will have long drives to get their medication.

"They're in terrible places with the least amount of population," Fults said. "I mean one for Little Rock, really? None for Bryant and Benton? They've done what they've always done; they've done an injustice to the patients." 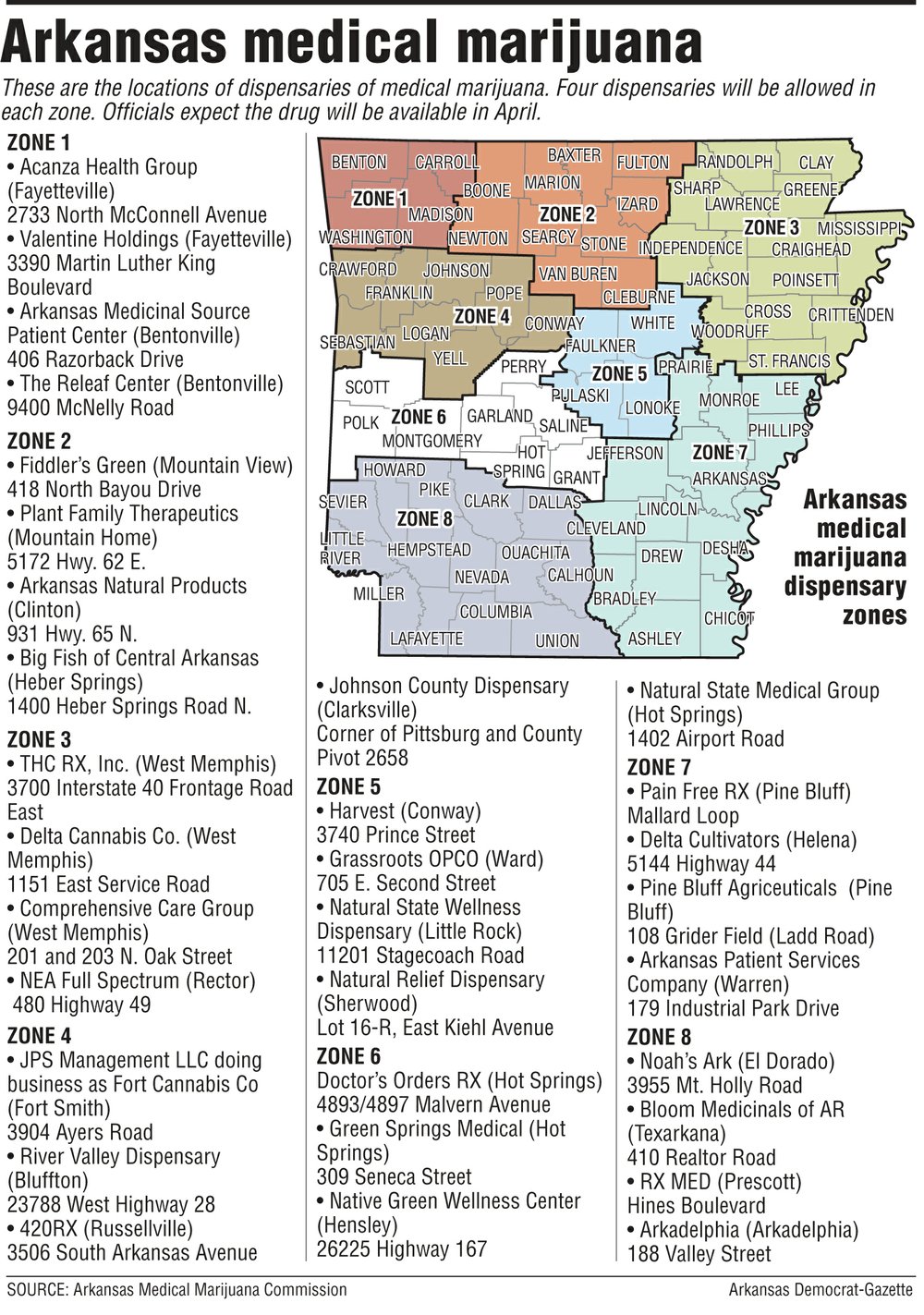 Scott Hardin, a spokesman for Arkansas Alcoholic Beverage Control, another agency involved in the marijuana program, said the final dispensary paid its licensing fee and posted its performance bond Monday. Formal licenses are in the process of being issued.

More than 200 groups applied for one of the coveted dispensary licenses. Those applications were reviewed and scored by Boston-based consulting firm Public Consulting Group with the top-scoring groups receiving permits to sell.

The five licenses to grow the drug were issued in July, and one company began growing last month. The other growers are in various stages of construction.

State regulators and industry insiders expect the first dispensary to open with cannabis available in about two months.

"We anticipate the first dispensaries will open no later than mid-April," said Alex Gray, an attorney for the Arkansas Cannabis Industry Association.

Arkansans approved Amendment 98 to the Arkansas Constitution in 2016, making the Natural State one of 33 where medical marijuana is legal. Court challenges and bureaucratic hurdles, though, have slowed the implementation of the state's program.

The amendment allows for up to 40 dispensaries, but the commission elected to start with 32 and monitor demand.

While the bulk of the drug will be grown by the five licensed cultivators, dispensaries may also grow a limited amount of plants. Twenty-two of the selected dispensaries plan to grow up to 50 mature plants, according to Alcoholic Beverage Control data.

About 7,000 patients have been approved for medical marijuana ID cards, according to the state Health Department, but that number is expected to grow as the rollout of the drug becomes imminent. The cards allow patients and their caregivers to buy and possess medical marijuana.

The Health Department plans to begin issuing the cards, which cost $50, later this month. A patient can be approved for a card if a doctor certifies that the patient suffers from one of 18 medical conditions.

A bill has been filed in the General Assembly to more than triple the number of qualifying health conditions.

As for the patients, Fults said many live on fixed incomes and suffer from debilitating health conditions. Long drives to buy medical marijuana will take a toll.

"Patients are excited that some dispensaries are finally going to open, but I don't think a lot of them realize where they'll be," Fults said.

Fults, a patient herself, will be able to use a dispensary in Hensley, 5 minutes from her home.

"We got lucky," she said. "But there's going to be several thousand that aren't."