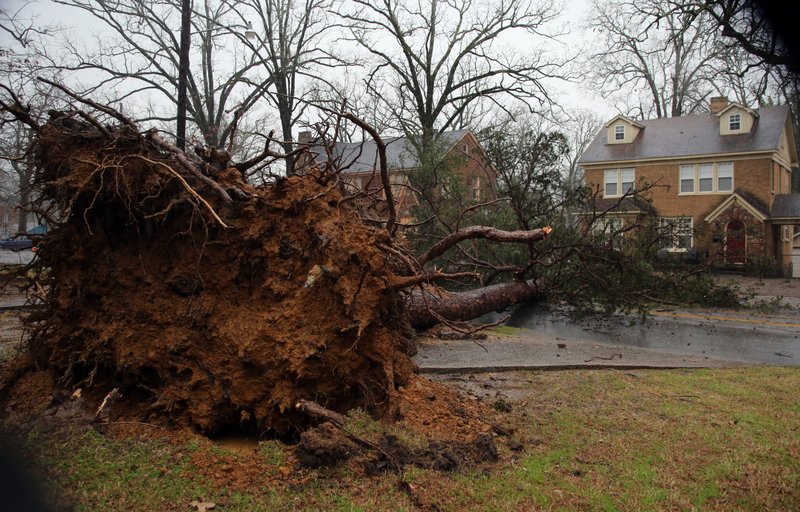 Thunderstorms brought torrential downpours and damaging winds that produced at least one tornado in Arkansas Thursday ahead of a return to wintry temperatures later in the day.

The storm system was pushing east throughout the morning and early afternoon, knocking down trees and power lines around the Little Rock metro and damaging parts of north-central Arkansas where a tornado touched down.

Survey crews from the National Weather Service confirmed an EF-1 tornado capable of carrying winds up to 110 mph touched down in Marion County following reports of a home that was heavily damaged. The crew was continuing to inspect the area in the late afternoon.

The storm also left behind many downed trees, including some in Pulaski County that fell on homes, according to storm reports.

Little Rock Fire Capt. Jason Weaver said a family near the Midtown neighborhood was displaced after a tree fell on their house.

Fire officials were also responding to several downed power lines, he said, including one that briefly stalled traffic on Interstate 30 in southern Little Rock.

More than 6,000 Entergy customers were without power shortly before 10:30 a.m. More than half the outages were in Pulaski County. The utility provider reported about two dozen outages in the county around 4 p.m.

The Arkansas Department of Transportation said it closed a lane of traffic as crews replaced the power line.

The storm system gave way to a cold front that will see temperatures plummet into the 40s by Thursday afternoon, with even cooler temperatures yet to come Friday morning, according to the National Weather Service.

The weather service predicted wind chills Friday morning could feel like zero degrees in Fayetteville. Lows in the Little Rock metro area are expected to dip into the teens.