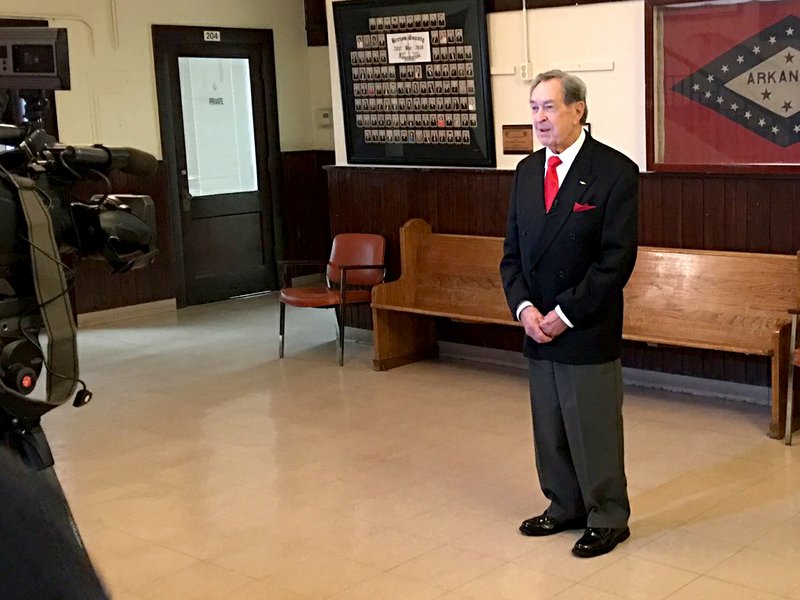 BENTONVILLE -- A Bella Vista man filed a lawsuit Wednesday to force a company, a former property owner, and the Bella Vista Property Owners Association to pay the cost of extinguishing and cleaning up an underground fire at a one-time stump dump on Trafalgar Road.

The cost of the work could be between $21 million and $39 million, Gov. Asa Hutchinson has said, but that price tag also could drop.

Trench work done at the site late last month stopped the fire from spreading to adjacent properties, saving the state an estimated $3.5 million to $7.5 million, according to Donnally Davis with the Arkansas Department of Environmental Quality.

Jim Parsons filed the lawsuit in Benton County Circuit Court and said he will act as his own attorney.

The state department is monitoring the air at two locations near the fire. The monitors record particulate matter levels. Readings Jan. 22-27 were in the good-to-moderate range, according to the department. An unhealthy reading in December prompted the state to caution everyone within a half-mile radius of the 8000 block of Trafalgar Road to avoid prolonged or heavy exertion outdoors.

The lawsuit alleges negligent oversight of the stump dump, which was operated without a permit and was used as a trash dump.

The fire is a man-made crisis created by Cooper, the association and Blue Mountain Storage, and they -- instead of taxpayers -- should be responsible for the costs to clean it up, the lawsuit says.

"Cooper and the POA have deep pockets," Parsons said. "Here's where the money could come from. They need to clean up the mess they have made."

Parsons said the Federal Emergency Management Agency might come up with money, but he downplayed that chance. "FEMA has enough disasters to take care of," he said.

Parsons said there is no proof that other people used the area to dump garbage.

"Once we officially receive the complaint filed against the Property Owners Association, we will review the allegations," said Kim Carlson, the association's marketing director. "We are unable to make further comments regarding ongoing litigation."

Representatives for Cooper and Fredericks could not be reached for comment. A woman at Blue Mountain Storage said Wednesday that Fredericks no longer owns the business.

Firefighters were dispatched to the area on Trafalgar Road on July 29, where they spotted smoke and what appeared to be the remains of a brush fire, Bella Vista Fire Chief Steve Sims said. Fire Department personnel have said the fire may be burning 50 or 60 feet underground.

Tom Judson, the Property Owners Association's chief operating officer, has said the association operated the dump on leased land from December 2003 to 2016 when the dump was covered with soil.

Nobody monitored the site the last few years it was open, but staff members would remove trash when possible, Judson has said. The operation was closed Dec. 31, 2016, according to Bella Vista's website. The property is now owned by Brown's Tree Care.

"This Trafalgar site is an unpermitted disposal site that has been used over the last decade, is my understanding," Hutchinson said at a Dec. 28 meeting at Bella Vista Fire Station No. 2.

Hutchinson pledged close to $1 million Dec. 28 to start the process of suffocating the fire.

Environmental Works dug a trench Jan. 21-25 along the south perimeter of the site. The trench ranges from 22 feet to 48 feet deep. It was used to assess the waste and determine the location of the fire, according to an Environmental Quality news release.

Work to get the site ready for extinguishing the fire will cost between $1 million and $1.3 million, according to the state. The work will be done by EnSafe, Environmental Quality, the Arkansas Forestry Commission and local officials. EnSafe is the Memphis-based company hired by the state to help put out the fire.

Another lawsuit was filed in November related to the fire.

Curtis and Tiffany Macomber, who live near the dump site, sued Brown's Tree Care and John Does 1-3 in connection with the fire.

That suit claims that continued smoke from the site has created a hazardous situation for the Macombers and their children. The case is assigned to Benton County Circuit Judge Xollie Duncan. An amended complaint will be filed and then Brown's Tree Care will file a response, according to court documents.